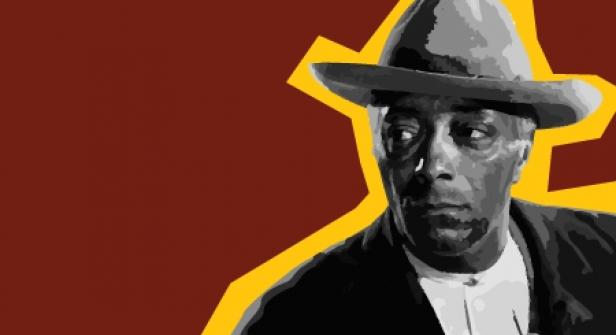 “Hernandez is the ‘new Negro’ in our movies.
No longer do we have janitor and shoe shine boys.
Now, we have a dignified, intelligent black man.”
– Michael Curtiz, director of The Breaking Point (1950)[1]

Metro-Goldwyn-Mayer’s Intruder in the Dust (Clarence Brown, 1949) introduced mainstream audiences to Juano Hernandez)[2](1896 or 1901[3] – 1970), an Afro-Puerto Rican radio and stage actor who went on to have a short but meaningful career in 1950s and 1960s Hollywood cinema. Based on a William Faulkner novel, Intruder in the Dust told the story of Lucas Beauchamp (Hernandez), a tall and proud old black farmer who faces lynching in a small Mississippi town after being accused of killing a white neighbor. Knowing that his lawyer, like other white residents, won’t believe him, the imprisoned Lucas seeks help from Chick, a white teenager who sets out to find evidence to prove his innocence with the help of Aleck, his maid’s teenage son, and Miss Habersham, an elderly white neighbor. Shot on location in Oxford, Mississippi, where Hernandez had to live apart from the white cast and crew, Intruder in the Dust is considered the best of the four Hollywood “race problem” pictures premiered in 1949. 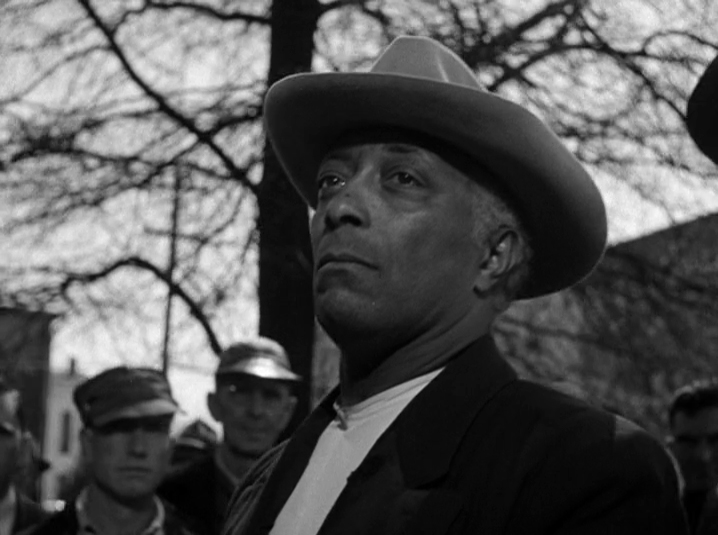 Juano Hernandez, Intruder in the Dust

Reviewers praised Juano Hernandez’s performance, which historian Donald Bogle has called “one of the strongest in the history of blacks in American films.”[4] While excellent, there were limits to his portrayal. Arrogant and self-confident, Lucas Beauchamp was also, in the words of director Melvin Van Pebbles, “an old black man, okay because he’s old and past his sexual prime.”[5] By contrast, director Clarence Brown forced the younger and darker-skinned teenage actor Elzie Emanuel (who voiced his opposition) to play Aleck like a bulging-eyed, cowardly comic stereotype.[6] The representation of Lucas’s elderly arrogance works together with Aleck’s teenage cowardice. Placating any racial sexual fears, young black masculinity was still represented as cartoonish (undesirable).

Still, some marketing exploited those fears. The upper left side of an ad printed in a black newspaper showed the words “LYNCH HIM!” over Juano Hernandez’s face.[7] On the right, the text read: “This is the story of a NEGRO accused of murder in the Deep South and a courageous WHITE WOMAN who defied a hate-maddened mob to defend him!” The strategic capitalization brought to mind fears about black masculinity as a sexual threat to white femininity, even though the film’s characters are old, portrayed as asexual, and the elderly white woman only interacts with the black teenager. The adaptation removed the novel’s deeper interracial relations, eliminating Lucas’s white ancestry and the close childhood bond between his wife Molly and Miss Habersham.

The trailer also exploited racial tropes. The words “THE SAVAGE STORY OF ONE MAN…” appeared on screen before cutting to a shot of Juano Hernandez from behind, with the words “This Man…” written on his back. The next scene showed “that man” facing a racial insult and ended with a freeze frame in which the dramatic music and text (“No beating around the bush!”) suggested that the black character’s attitude provoked the violence. The male narrator told viewers about “the strong force of pride and decency which thrives even in the midst of terror” over the image of a white family at the dinner table, even though that character description is better suited for Lucas Beauchamp. The narrator then exalted the virtues of the white characters: “the faith of this boy… the courage of this man… the heart of this lady.”

Despite good reviews, Intruder in the Dust had disappointing box-office results. Pinky (Elia Kazan, 1949), in which white ingénue Jeanne Crain played a light-skinned black woman who passes for white, was the moneymaker among the “race films” released that year. There was Oscar buzz (and a Golden Globe nomination) for Juano Hernandez, but Pinky got the Oscar nominations for Crain and Ethel Waters (in mammy mode). Hernandez acted in three more studio films between 1949 and mid 1950. The profitable ones were Young Man with a Horn (Michael Curtiz), in which the Puerto Rican actor gave an affecting performance as a fatherly jazz musician, and Stars in My Crown (Jacques Tourneur), a piece of Americana in which Hernandez – once again playing an old farmer threatened with lynching – played a more dignified variation of the Uncle Tom stereotype.

Though he “starred” (played lead or major supporting roles) in them, the films didn’t turn Juano Hernandez into a bankable movie star. He also didn’t get a glamorous “star treatment” in movie magazines or when photographed in films. Instead, Hernandez became an admired and respected character actor whose performances of dignified black masculinity paved the way for younger black actors who achieved full stardom, most notably Sidney Poitier. Before Hernandez, the most popular black performers in Hollywood were comedians Stepin Fetchit and Eddie “Rochester” Anderson. Their performances could be sources of embarrassment, but they turned them into box-office attractions. Hernandez’s dignified approach, on the other hand, mostly earned him the respect of critics and peers. 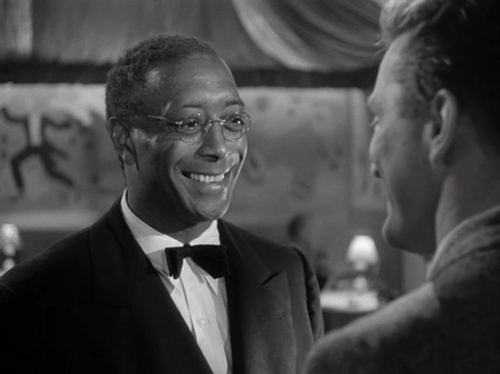 Born in Puerto Rico, but raised in Brazil, Juano Hernandez arrived in the United States as a teenager. Details about his early years in the US are unclear. He reportedly toured the country as a carnival performer and was an amateur boxer before joining the vaudeville circuit. By the late 1920s, he had worked his way up to parts in all-black Broadway revues, including Blackbirds, a show that briefly took him to Paris in 1929. Back in the US, Hernandez became known for his work on radio. His big break came in early 1933 with John Henry, a CBS series about a mythical dark-skinned strongman from the Mississippi country, adapted from stories by white author Roark Bradford. Hernandez starred, co-scripted, composed the theme song and directed the atmospheric “Negro folk songs.” Some compared the six-foot-two actor to his radio character, describing Hernandez as being “big and strong and fearless himself” with “a deep arrogant bass voice.”[8]

In the 1930s and 40s, Hernandez became one of the few black radio performers whose career wasn’t restricted to playing demeaning roles, though at least once he faced criticism for accepting an “Uncle Tom role” rejected by another actor.[9] On radio, Hernandez had a career akin to Latino actors in Hollywood cinema, meaning that he played a variety of ethnic roles, usually sidekicks in serials, like the Hindu servant Kalu in Jungle Jim (1935). Hernandez also played black roles, ranging from folk characters like “De Lawd” in The Green Pastures (1940, also based on Roark Bradford stories) to historical figures like Booker T. Washington in The Burning Bush (1948).

On stage and screen, skin color restricted Hernandez to non-Latino black roles. His theater work – including Strange Fruit (1945), an interracial drama staged by compatriot José Ferrer—dealt with “race themes,” featured all or mostly black casts and had limited runs.[10] He made his screen debut in Oscar Micheaux’s The Girl from Chicago (1932), a low-budget movie for black audiences with an all-black cast. Hernandez played Cuban gangster Gomez, his only black Latino role in films. After two more Micheaux films (Lying Lips, 1939, and The Notorious Elinor Lee, 1940), Hernandez didn’t return to movies until Intruder in the Dust.

Despite an acclaimed introduction to studio films, Juano Hernandez didn’t make many movies during 1950s and 60s. On May 1950, after filming The Breaking Point, the self-taught actor received an honorary doctorate from the University of Puerto Rico and accepted an offer to teach at its Drama and English departments. After spending most of his life abroad, Hernandez moved back to the island and remained based there during his last two decades. He founded an acting school and made unsuccessful efforts to produce films, including a biopic of Puerto Rican boxer Sixto Escobar. Sadly, Hernandez only shot one film on the island: Machete(1958), a low-budget US melodrama in which he played the plantation butler.

Juano Hernandez’s job allowed him to travel for periodic film and television work. In Hollywood, after a bit part in Robert Aldrich’s film noir Kiss Me Deadly (1955), Hernandez’s most prominent roles were in two Glenn Ford films: Trial (1955) and Ransom! (1956). For the rest of the decade, Hernandez played supporting parts in films starring young black performers like Sidney Poitier (Something of Value, 1957, and The Mark of the Hawk, 1958), Nat King Cole (St. Louis Blues, 1958) and Woody Strode (Sergeant Rutledge, 1960). His performances in Hollywood cinema were even fewer in the 1960s, though he played small parts on television episodes of uneven quality. His last two film roles reunited him with the work of William Faulkner (The Reivers, 1969) and the performer who most fruitfully built on his legacy as screen actor (Sidney Poitier, They Call Me Mr. Tibbs!, 1970). 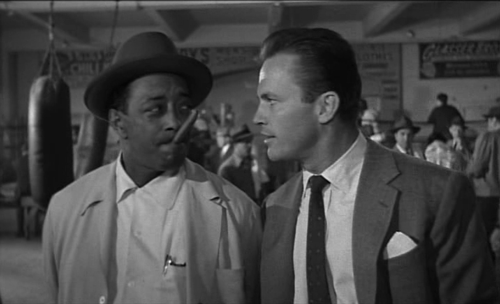 Despite the occasional blog entry, Puerto Rican newspaper note or TV show, Juano Hernandez’s work on film, television, radio and stage remains largely unknown and awaits a critical reappraisal that is informed by scholarly work on race and gender in transnational media. In the meantime, many of his movies, radio programs and TV episodes are now readily available on different media formats, allowing audiences to seek, (re) discover and value the acclaimed performances of this important Afro-Puerto Rican actor.

Five Movies to Watch (besides Intruder in the Dust)
The Breaking Point (Michael Curtiz, 1950) – Among Juano Hernandez’s first studio films, black newspapers singled out this adaptation of Hemingway’s To Have and Have Not as offering the most advanced portrayal of blacks on screen. At the prompting of star John Garfield, the script stressed his interracial friendship with the Juano Hernandez character without alluding to race. The last shot, featuring Hernandez’s real-life son, was an unusually understated and powerful way of showing how little the fate of black characters mattered.

Trial (Mark Robson, 1955) – Hernandez plays a conscientious African-American judge in this courtroom drama, one his rare Latino-themed films, where the trial of a Mexican boy blamed for the death of a white girl turns into an indictment against Communism. That same year, Juano Hernandez and star Glenn Ford also filmed the thriller Ransom! (1956). The final scenes between them showed some changes in the representation of black servant / white employer relations.

Something of Value (Richard Brooks, 1957) – Based on a bestseller about the Mau Mau uprising against British settlers in Kenya, this was the first of three films Hernandez made with Sidney Poitier. Shot partly on location, Rock Hudson stars as Peter, a white settler’s son who grew up as brothers with Kimani (Poitier), a native Kenyan who joins the insurrection. Hernandez has a showy supporting role as the tribal elder that initiates Poitier and becomes his father-in-law.

Sergeant Rutledge (John Ford, 1960) – As a cavalry sergeant falsely accused of rape and murder, former athlete Woody Strode (then in his mid 40s) makes a strong impression reminiscent of Juano Hernandez in Intruder in the Dust. Typical of his later screen work, Hernandez plays his small role as an elderly sergeant with understated effectiveness.

The Pawnbroker (Sidney Lumet, 1965) – Rod Steiger stars as a pawnshop owner and concentration camp survivor idolized by his young Puerto Rican assistant, who is involved with a black prostitute. Hernandez has a very small part and one great scene as Mr. Smith, one of the customers mistreated by the shop owner. Afro-Cuban poetry reciter Eusebia Cosme, soon to be typecast as quintessential Latino black mammy Mamá Dolores in the Mexican film and television industries, plays Mrs. Ortiz, mother of the Puerto Rican protagonist.