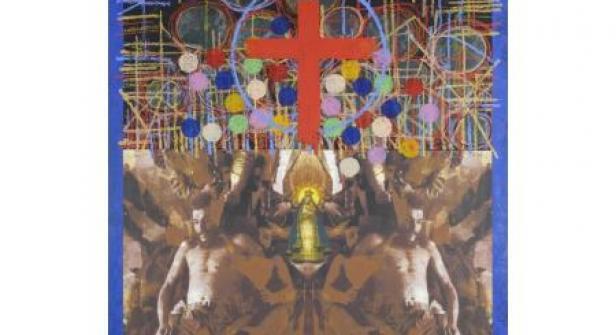 As I leave the office, my bag is heavier than when I arrived because it now contains several exhibition booklets, a film on the life of Piri Thomas, and other materials. In short, homework. After 25 years of working as an art professor here at Hunter College, Juan Sánchez does not hesitate to offer these archival materials as parting gifts. In many ways, they reflect our conversation, two hours where we discussed everything from his career as an artist, his thoughts on the diaspora, to more general thoughts on Puerto Rican identity. Recently, BRIC House Gallery hosted the first-ever solo exhibition of his artwork in Brooklyn (You can read the Centro review of “¿What’s The Meaning of This?” here). This is the same place where he was born, where he was raised, and where he continues to work to the present day.

Accordingly, we start by talking about his origins. Sánchez’s parents, like many others, left Puerto Rico during the first major wave of immigration to New York City in the 1940s and 50s. This migration experience and cultural identity eventually found its way into his work, of course, but the trajectory of Juan Sánchez’s career began, like many artists, with several fortuitous events early in his childhood.

After demonstrating an interest in the work of comic book artists and displaying an active imagination from a young age, attempts were made to foster his creative talent. One professor in particular, a young Jewish woman named Ms. Thurston, that taught at his school, P.S. 106 in Bushwick, even met with Sánchez’s parents to discuss the possibility of letting their son participate in more art-related activities at school. There were of course practical concerns along the way, money principally, but after taking a weekly Saturday class at the Pratt Institute during middle school and receiving more formal training, these initial efforts morphed into a desire to have a career as an artist.

However, in an attempt to negotiate the need for money and his creative leanings,  Sánchez initially chose a career in graphic design, which at the time meant he could be an artist without having to starve. From there, Sánchez tried freelance work, but did not enjoy sharing his vision with art directors. Ironically, it was the world of fine art, with its strict aesthetic parameters and myopic view of outsiders, that lured in Sánchez with the promise of artistic freedom. So while studying as an undergraduate at Cooper Union in the mid 1970s, he began to move away from graphic design and toward fine art, experimenting with photography and other mediums. He would then go on to receive his MFA from the Mason Gross School of the Arts at Rutgers State University of New Jersey in 1980. Thus began his transition into the next phase of his career.

Sánchez has dealt with issues of intersectionality generations before the concept entered into the mainstream. His identity relies on a diverse background, one that includes the black and Puerto Rican influences, among others, which dominated New York City in the 1970s. Furthermore, when describing the contributions of the diaspora to the island, Sánchez makes a specific example of salsa, the hallmark of this era, occasionally referring to it as Latin music, the original term by which it was known in its early days. In the Bronx, this music became fused with jazz, soul, Cuban, and Puerto Rican influences-among others–until it became the soundtrack for Puerto Ricans both on and off the island. And like salsa, Juan synthesizes his diverse background into a clear and coherent narrative on the canvas, especially when it comes to his more autobiographical works.

Juan is black, Puerto Rican, Latino, New Yorker, Nuyorican, Brooklynite, and American–all at the same time. So when it came to questions of identity, it was something of a task to find a place for himself. This is another aspect of the Puerto Rican diaspora he has effectively had to navigate. Without sufficient infrastructure during the first wave of immigration during the mid-20th century, the Puerto Rican community essentially remade itself here in the United States, to the point where these early contributions, the proto-Latino identity, became part of the North American narrative. For Sánchez, he describes this process as an amputation. As he sees it, Puerto Rico had severed the phantom limb that constituted the diaspora, provoking the unique, sometimes divisive, relationship between the two sides.

However, most important to Sánchez is the underlying history of both. This is often found in his work through the social justice values to which he pays homage, creating a more universal scale with which to appreciate his artwork. In other words, to move beyond Puerto Rico as a source of inspiration, as well as his early experiences in New York with the Young Lords and El Taller Boricua; and instead learning to express the struggle of other cultures, is to express solidarity; yet to maintain an insular mentality, on either side, causes friction, which begs the question, at least for Sánchez: how has Puerto Rico waited so long to outsource its political woes? 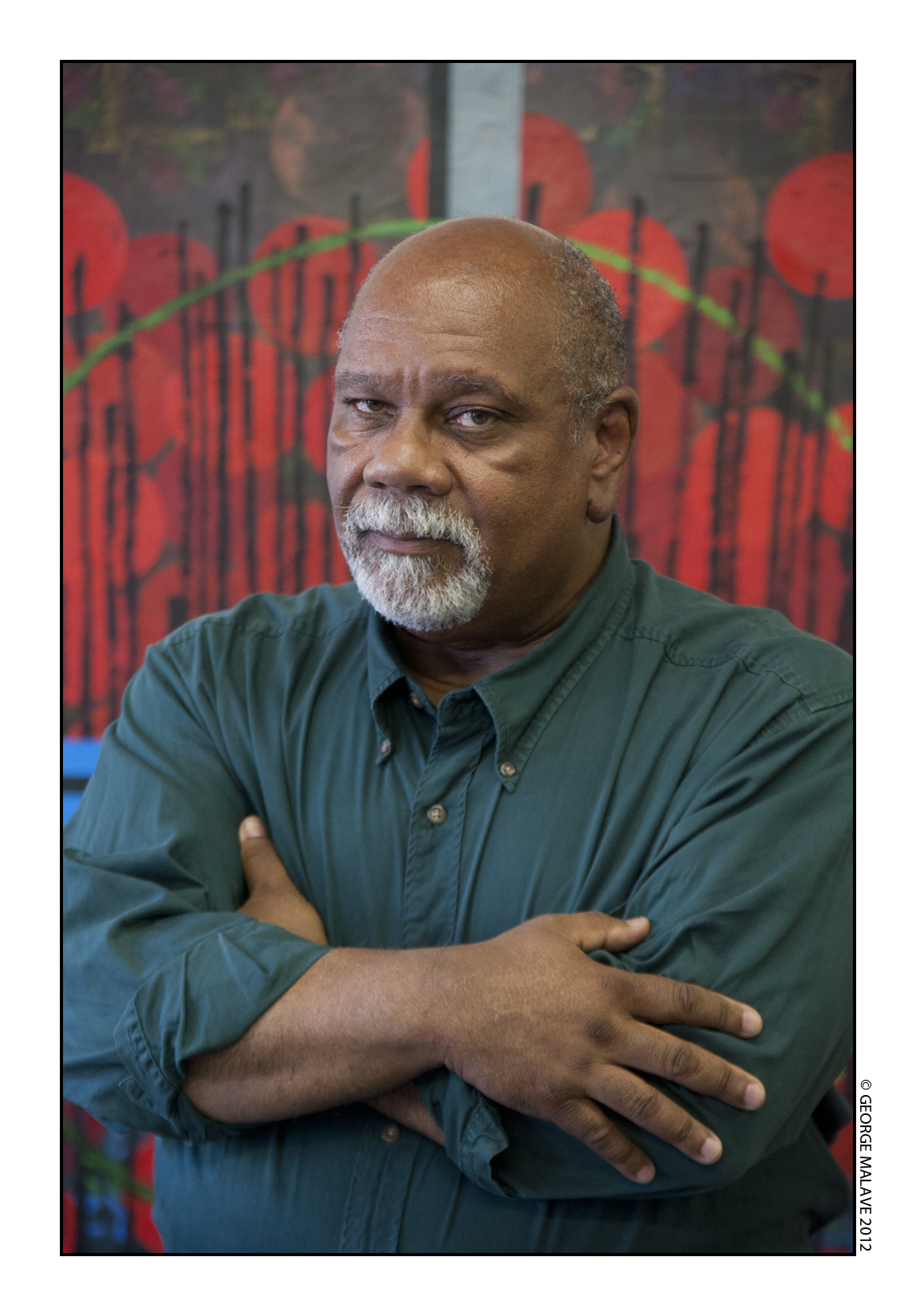 Going back to Juan Sánchez and his art, dialogue is a constant. The struggle and attempts to organize, be they through armed struggle, social programs, political organizations, and so on, have evolved into this mentality of recognizing the Puerto Rican-ness of similar circumstances around the world. The rest is perhaps timing, zeitgeist. Puerto Rico is experiencing a debt crisis, but this is the perception of bad to worse, the false perception of a welfare economy that relies on its “phantom limb” to pay utility bills and the like. It may or may not be the case, but the ‘crisis’ hints at a period of prosperity that has never existed under colonial rule. So Juan Sánchez preserves this subversive history of exploitation. In a way, it is an example of reverse-exploitation. He showcases history at its most raw and immediate visual forms, challenging his audience to go down a similar path of reflection, research, and latent understanding.

This is a noticeable feature in many of the pieces featured at the BRIC House Gallery exhibition. A picture of Che lying dead in a small hut in Bolivia in one painting conveys a more humanistic portrait in contrast to the iconography we are more familiar with through pop culture. A sickly Pedro Albizu Campos in another painting, just before his death, doesn’t tell the evoke the same emotional response as the famous image of him defiantly yelling, blazing with revolutionary passion. The truth is these men both suffered a great deal for their convictions, but it is not always inspiring to witness them defeated, near-death. This is the sort of nuanced perspective that Sánchez carries with him everywhere he, or rather, his art, goes. So as Juan Sánchez moved from the nascent cultural institutions representative of his cultural background, to more established international and established venues in the art world, he creates a space for this kind of dialogue. It is a decidedly Puerto Rican space in the heart of a mainstream that often chooses to overlook specific narratives, which is why Juan’s, for instance, belongs to no one. He may be a symbol of his community and a success story, but he is his own artist. He does not define Puerto Rican art, which is ultimately for others to debate and decide. 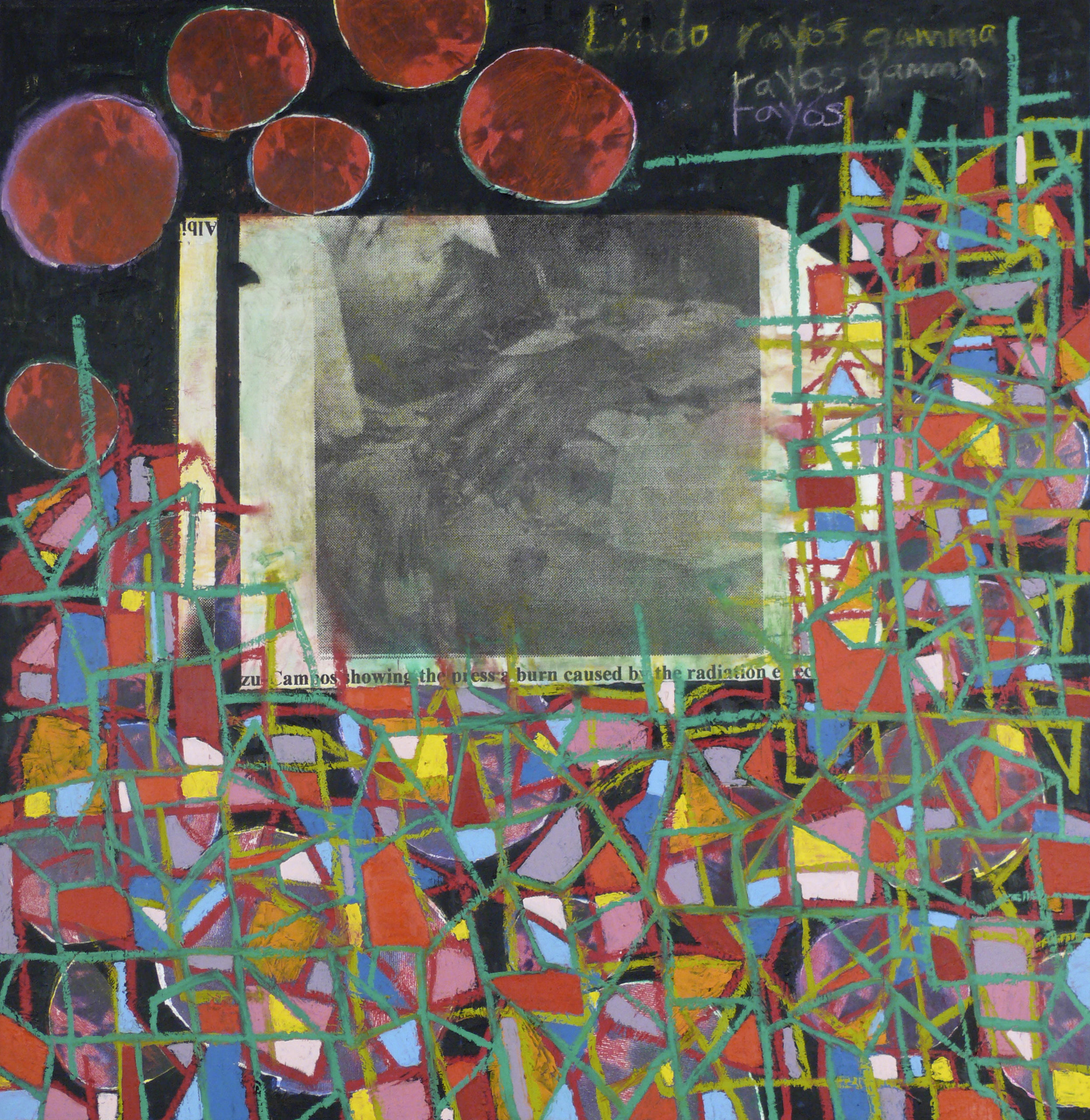 Now with the CALL Program, a digital archives program, his legacy is enhanced by the accessibility that this technology provides. And as long as no one is profiting directly, Sánchez embraces social media and it’s ability to extend the reach of his work. This most recent exhibition in Brooklyn, a retrospective, is the perfect example. This could mean sharing a photo of the Mirabal Sisters that appear in one of Juan Sánchez’s pieces, and then adding the corresponding hashtags to allow the Internet to catalog the thoughtful connectivity of his work. From the Mirabal Sisters to the Rafael Trujillo regime, to U.S. intervention in Latin America, and so on, Sánchez shows us where history meets heritage, and the struggles we inherit. His collages, paintings, and mixed-media pieces are an extension of this philosophy, now made whole through our ability to share and research this knowledge that was once so ubiquitous for Sánchez while growing up in the midst of a Puerto Rican liberation movement, the civil rights movement, the gay rights movement, and so on.

After meeting with Sánchez, I’ve started to think of migration in terms of progress, though not quite in the traditional sense. Sometimes, progress is just about expanding the definition of what it means to be Puerto Rican. Eighty years ago, New York City may have been a new home for many of us. But now, thanks to artists like Juan Sánchez, there are walls in museums around the world that we can call our own, a space that has been claimed for future generations.