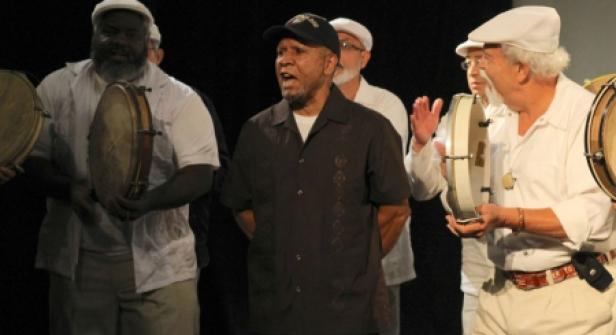 At the pace of “Bambulaé sea allá, bambulaé…,” a group of children danced bomba y plena alongside Big Bird. It was the late 80s and the TV show Sesame Street was dedicating an entire segment to the traditional Puerto Rican beats.

Among those dancing was Julia Loíza Gutiérrez, who had been raised surrounded by these sounds and luminaries such as Roberto Cepeda and Eugenia Ramos. From birth, she was destined to be part of this cultural tradition, being the daughter of Juan Gutiérrez, the founder of the Grammy-nominated group Los Pleneros de la 21.

Today, at the age of 32, she has become one of New York City’s premier bomba dancers. Moreover, she is the principal dancer and dance instructor at Los Pleneros de la 21, as is part of The Eighth Biennial BombPlenazo 2014’s opening panel held in at Pregones Theater in the Bronx.

She has joined a lineage of educators that, since 1989, has spread Puerto Rican musical heritage through Los Plenero’s “Bomba & Plena Community Workshops.”

Gutiérrez is a true example of a fresh generation of bomba and plena practitioners that is transforming the ways in which this cultural legacy is transmitted and performed—a talented and mostly young group of musicians, dancers and entrepreneurs that are reshaping their cultural roots through collaborations and innovative projects.

For example, she teaches dance lessons to a broad audience, including students of a variety of ages and ethnicities. She decided to spread her knowledge and make it more “accessible” after she realized these traditions were preserved mostly among Puerto Ricans.

“You couldn’t just go up and register for a class. It was very much a unique experience to be a witness,” she explained. For her, the bomba was a closed circuit where “you were offered the privilege of being welcomed into a community or family”.

“Youth were taught not to get close or dance to the drums unless they were invited,” she added.

The panel “Retracing Our Steps and Marking New Paths: Bomba and Plena in the Diaspora,” included her along with Jorge “Georgie” Rivera and Marinieves Alba, a sibling couple that also promotes their cultural heritage, and Bienvenido “Benny” Ayala.

Rivera is a percussionist and since 1995 has taught about the core rhythms and variations of these traditional sounds. Their students repeatedly asked Gutiérrez and him for bomba teaching resources so he created an educational album with samples of the main bomba rhythms.

“I feel happy to be part of doing something like this. It makes it easy for others to be able to have the resources. The internet, for example, is a very powerful tool for musical education,” he said.  “I like to focus on kids. We don’t do the Barney stuff; we don’t speak to them like ñe, ñe, ñe. I just want to plant the seed; they can search through the internet or go to BomPlenazo.”

Born in the Bronx, he grew up listening to heavy metal, but his father’s passion for his roots inspired him to explore bomba through percussion. Years later, he would become a founding member of Yerbabuena and perform with William Cepeda, Tito Puente, Antonio Cabán Vale “El Topo” and Arturo O’Farrill.

The cultural activist Marinieves Alba moderated the panel that discussed the evolution of this musical expression. It was a multi-generational reflection of the evolution of these sounds, which has fused the coast with the countryside, the Afro with the jíbaro: a quintessential beat of the Puerto Rican musical legacy. It is also part of the history of the diaspora that bridges cultural ties with the island through ongoing musical exchanges.

As far back as the 50s, this traditional music has changed as it has adopted other musical influences. However, according to Alba, during the late 90s and early 2000s, a particular bomba and plena phenomenon took place in New York.

“It was an interesting era of cross pollination. It brings up duplication or the recalibration of how these things are created and co-created,” Alba said. Traveling through basements, bars, backyards and rooftops, a new scene was reshaping the traditional sounds. In 1997 Hector “Tito” Matos created the renowned group Viento de Agua, which fuses bomba and plena with other Afro-Caribbean sounds and even jazz.

Bienvenido “Benny” Ayala, known as “El Plenero Mayor,” who was also part of the panel, confessed his difficulty keeping track of the newer influences over the plena. “Es más avanzada de la que estoy acostumbrado a cantar,” he explained. He praised the work of upcoming talent such as his grandson Nelson Matthew Gonzalez, a young respected musician and dancer who plays conga, bongo and timbales with six-time Grammy-nominated musician Bobby Sanabria.

Other members of la vieja guardia such as the aforementioned Juan Gutiérrez support this new musical vein. “Each group is trying to speak with its own voice,” said Gutiérrez.

He praises the new cepa work because of their “genuine interest” in their roots and the great audience that follows them. He particularly praises the work of Alma Moyó, led by Alex LaSalle, which incorporates the vocal styles of bomba with Caribbean-blues and other fusions.

“[They add] beautiful ingredients that are from their time. We made what we needed to, in our historical moment, and now they have their own influences,” said Gutiérrez, whose group has spread the plena around the world to places like Russia and to the Smithsonian Folklife Festival and Carnegie Hall. Through the years, he has been pleased of inviting young musicians to Los Pleneros de la 21 presentations, because they “add something to the recipe without altering its original flavor.”

Groups like the trendy Yerbabuena play Afro-music sounds fused with other genres, expanding creatively the traditional bomba and plena developed during the 60s.  This is one reason the founder of Yerbabuena, Carlos “Tato” Torres, refuses to label his group as bomba although many people recognize it that way.

“[It] utilizes rhythms and sounds of bomba, but it is a group with Puerto Rican roots,” said Torres, a fourth-generation cuatrista. About the young musicians, he says they bring a “remezcla” integrating their “personal tastes and the kind of music they have been exposed to.”

Torres believes that some people consider the incorporation of sounds of bachata or salsa into this traditional music to be blasphemy.

“A bombanazi or a plenanazi, the purists can come and say [something], because there is a limited vision of what culture is, they confuse the cultural products created by academia with the real culture. The culture is alive and it must keep changing,” he added. 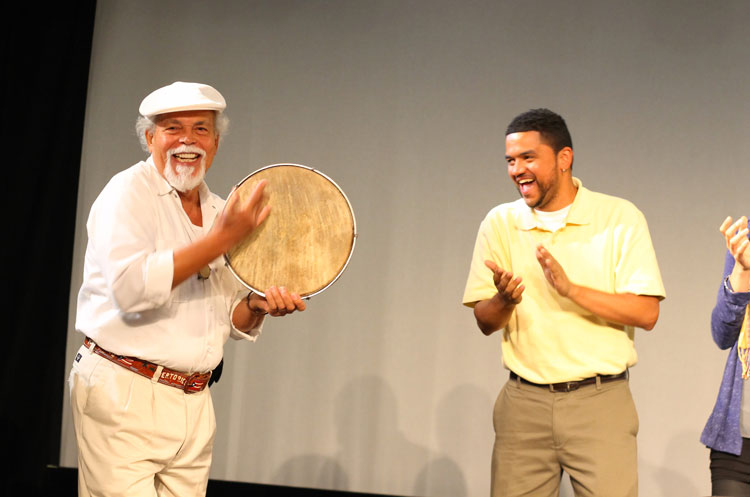 Julia Loíza Gutiérrez believes that the release of the documentary Raíces marked a transition point in the emergence of a “revitalized” plena. It is a film that features Marc Anthony, La India, Olga Tañón and interestingly uses hip-hop to narrate the history of this important Puerto Rican music.

But more than the sounds, Julia Gutiérrez considers the audience to have been greatest turning point. It has become more diverse, takes bomba and plena lessons and visits music venues regularly.  For her, this is a result of the young crowd’s efforts to take into social spaces what they learned in their community settings.

Whith her father, Juan, the expansion to non-Puerto Rican audiences began back in the 70s, when the influential René López, producer of Victor Montañez and Los Pleneros de la 110, took the bomba and plena to new cultural settings such as the Smithsonian Institute.

In New York City, stores like Agueybana Bookstore and cultural centers like Rincón Criollo “La Casita de Chema” were the epicenter for bembés and the escuelita for the new generation. Eventually, the revival expanded to bars and hip young spots like Café Largo and Camaradas.

Tato Torres of Yerbabuena points to Camaradas as the trendy place to be for the bomba and plena scene, which spreads the Puerto Rican vibe as new residents move to El Barrio. “It was the first place, in my case, where I found the diaspora to be a mixed group but united. It was an interesting audience of newcomers and the diaspora together. Before, I felt I was living between two worlds, the one of my family from Puerto Rico and the Nuyoricans, and there all that disappeared,” said Torres.

The decades-long debate between the traditional versus modern bomba and plena seems like it will remain unresolved for now.

Besides sounds, one of the “hot issues” has been the use of traditional garments like the women’s attire for bomba. The dresses have been used for symbolic and artistic purposes, and some people consider them a fundamental part of the tradition. An example of this was a member of the audience at the BomPlenazo panel, who said the use of jeans underneath the skirt and the use of instruments such as piano bother him because it is against “what his father taught.” For him, it is “breaking down the tradition.”

The new generation’s approach is dramatically different and they believe elements such as long skirts are highly outdated.

Marinieves Alba went on to say that “the bomba you see on a stage with trombone or clarinet is a fusion that is created primarily for popular consumption and is not necessarily the bomba you will see on a Bombazo or un patio or un batey. There is a whole spectrum of possibilities that exist.”

For Julia Gutiérrez, the incorporation of new elements raises skepticism among Puerto Ricans because they consider their identity, what it means to be Puerto Rican, within the music.

“No tradition, no culture, no community lives in a vacuum. It moves, it breathes. We don’t live the same reality that the elders did 50 years ago. We don’t  live in Puerto Rico, right? It is impossible for us to do or practice bomba y plena exactly how it was before,” she said.

“Not to say that we are forgetting, but if we do it exactly how it was before, we are kind of doing ourselves a disservice, because we are just mimicking. We are not really owning these traditions. We are not putting ourselves and creating our identity within these traditions and these expressions.”  She concluded saying, “that’s really what bomba is, expressing yourself and who you are, and finding your voice.”

Bomba and plena may not sound exactly they way it did in the past. Each succeeding generation has expanded the miscial form with their particular voice and influences while still preserving and promoting their Puerto Rican roots. These cultural expressions have been, and will be, under constant transformations as each generation reinterprets them and redefines what the  traditions are.