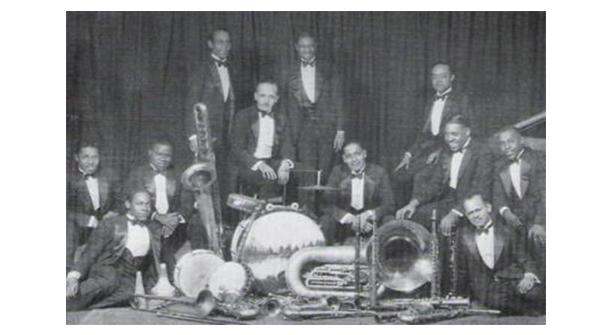 *The following article is part of the PR Project and was originally published on jazzdelapena.com It is reprinted here with permission.

Among the first Boricuas to receive recognition in early jazz was Rafael Escudero. He was born in 1891 and well known in American jazz circles. Today Escudero is mostly forgotten. But this native of Manatí, Puerto Rico was an outstanding tubist and bassist and a link between the growing number of jazz bands and other orchestras in Washington, DC, New York and Puerto Rico.

Escudero was unique in that his departure for the United States predates World War I and the Jones Act (1917). At 21, he boarded the steamer Caracas in the port of San Juan and arrived in New York on June 13, 1912.

An accomplished tuba player and (later) bassist, Escudero came to New York on a scholarship from the New Amsterdam Musical Association (NAMA).

Over the years he performed with the NAMA band, featuring the great Ethel Waters, also the Marie Lucas band at the Howard Theater in Washington, DC and the Wilber C. Sweatman band, for which he played the tuba and the string double-bass.

In the book, Early Jazz, It’s Roots and Musical Development, author Gunther Schuller refers to Escudero’s talents. In one instance, he describes Escudero as the one who put the “swing” in the popular tune, “Put it There.”

Escudero was also a member of the Fletcher Henderson Orchestra, which is considered one of the most famous African-American bands during the Harlem Renaissance. He was recruited when Henderson heard him perform with the Sweatman band at the Howard Theater.

Eventually, Escudero left the Henderson band to join the Detroit-based McKinney’s Cotton Pickers, led by Don Redman and who, on and off, included such jazz greats as Benny Carter and Rex Stewart among others. Also, the band had all-star sessions with players such as Jabbo Smith, Sidney de Paris, Coleman Hawkins, and Fats Waller among others.

Escudero also recorded with the Cotton Pickers under the name, The Chocolate Dandiesfeaturing Lucille Hegamin, Bessie Smith, and Ethel Waters. He was also a member of Louis Armstrong’s (early) band and toured with W.C. Handy.

In another instance, Schuller described Escudero as a “stalwart of the tuba.” Also, according to Eugene Chadbourne of the All Music Guide, Escudero was “a valuable rhythm section member in some of the most prominent of the larger classic jazz ensembles.”

Despite a stellar reputation as a tubist, Escudero switched to the string bass, a necessary innovation that permitted the sound (of the bass) to be more audible when performing in large ballrooms and recording studios.

After a long and successful career in the States, Escudero returned to Puerto Rico, where he performed, composed and maintained a busy schedule. He died tragically on April 10, 1970, the victim of a hotel fire in Old San Juan.

Today, the Boricua Pioneer and gifted tubist/bassist can be heard on over 50 recordings, including Louis Armstrong in New York (1924), Mc Kinney’s Cotton Picker’s Volume 1 (1928), Bessie Smith’s Yellow Dog Blues (as Bob Escudero) and the Fletcher Henderson Orchestra featuring Coleman Hawkins (1923-1927) and Louis Armstrong among others.

About the author: A graduate of Empire State College with a dual major in journalism and Latin American studies, Tomas Peña has spent years applying his knowledge and writing skills to the promotion of great musicians. A specialist in the crossroads between jazz and Latin music, Peña has written extensively on the subject.