Home » Centrovoices » Arts Culture » Carlos Arroyo: The man with the fastest feet at the Palladium

Carlos Arroyo: The man with the fastest feet at the Palladium 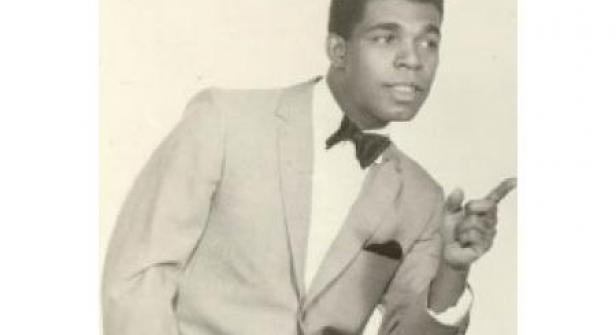 The Palladium Ballroom, along with the mambo and other Latin-style dancers, have reached an almost mythical and legendary status. The names “Cuban Pete” (Pedro Aguilar), Millie Donay, Augie y Margo, Andy Jerrick, Marilyn Winters, “Killer Joe,” Mike Ramos and many others are well-known among fervent followers of the history of Latino music from the 1950s onward. Carlos Arroyo belongs to this select group of dancers, pioneers, and spokepersons for dance as a medium and for the stage at the Palladium.

Carlos Arroyo was born in 1931 on Eduardo Conde Street in Barrio Obrero, an area that was historically a community of runaway slaves, freed slaves, and laborers. He was the son of Carlos José Arroyo and Pilar “Lola” Almodovar. His father was a linotype operator, carpenter, and contractor, while his mother worked as a seamstress and domestic worker. They both liked to dance, play guitar, and sing duets. However it was his grandmother, Marcela, who raised him after his parents migrated to New York. She became the most influential person in his life, instilling in him a love of dance that ultimately became the focus of his adult life. From an early age, he grew accustomed to watching her dance and learning the steps that accompanied the beat of the music.

In 1947 he reunited with his mother who was living on 122nd Street, between Second and Third Avenues, in New York’s East Harlem, “El Barrio.” Although he arrived by plane, many referred to him as a “Marine Tiger,” alluding to the last steamship that brought hundreds of Puerto Ricans that emigrated to New York City after World War II. Like many young Puerto Ricans at the time, he went to Benjamin Franklin High School, where students were divided along ethnic lines and fights often broke out between Puerto Rican and Italian students. It was during this time that he started to feel racism in ways he had never felt while in Puerto Rico. He found solace in his job as a fruit vendor at La Marqueta, a street market supplying a host of ethnic foods located on Park Avenue between 110th and 116th Streets, where he earned $13 to $15 a week.

As soon as he had the chance, Carlos began looking for places where Puerto Ricans and other Latinos were dancing la rumba, a type of music whose rhythm was so catchy he was barely able to keep his feet from moving. An incidental encounter indefinitely changed his life’s path. At the Park Plaza on 110th Street and Fifth Avenue, and at Club Obrero Español on 102nd Street and Madison Avenue, he could see stars from Latin America, such as the great Cuban musician Machito, the musicians Julio Andino and Marcelino Guerra, the group Alforana X and the Conjunto Capaceti. Although entering these places was prohibited for minors, being in close proximity and catching a glimpse of these stars of entertainment was both stimulating and encouraging. At times he could hear live music that was blared into the street, where he practiced and improvised dance steps he one day hoped to use on the dance floor. On other occasions he found ways to sneak into the club, masquerading as an adult by wearing a fake mustache, hat, and dress-shirt. Once inside on the dance floor he always managed to draw attention to himself, quickly becoming the focus of onlookers who cheered him on as he moved to the beat of the music. He and his spectators were frequently broken up by security guards, who insisted on removing the minor despite the crowd’s enthusiasm.

When he was finally of age, he felt liberated because he could finally enter the temples of music and dance he had so often dreamed of. The only thing left to find was a partner in crime. At the Savoy Ballroom, Carlos and his partner Ramoncilla started monopolizing the dance contest championships with $25 prizes, until Bob Buchanan, the owner of the club, prohibited them from competing. Instead he hired them to do a dance routine that the audience thoroughly enjoyed. Arroyo’s next goal was to dance on Wednesdays, Saturdays and Sundays at the Palladiium, most famous of all the Latin clubs, where Federico Pagani, a show promoter, had established mambo dance competitions. Arroyo’s first partner was the African American Dottie, and later Puerto Rican Carmen Cruz, with whom he won many competitions and with whom he was anonymously immortalized in Mambo Madness (click here to watch a clip Carlos Arroyo dancing in the film). Cruz was also his dance partner in performances at el Teatro Puerto Rico, Hispano, Triboro and at Mount Maitre in Canada, among others. 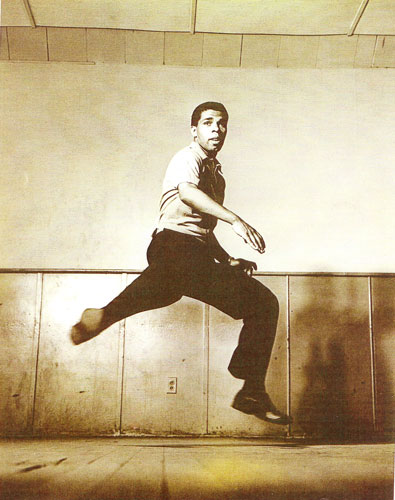 Click on the photograph for additional images. All images from the Carlos Arroyo Collection.
Center for Puerto Rican Studies.

Essential to Carlos’ success as a profesional dancer was the development of a style that ultimately defined his career as a dancer. Inspired by the Nicholas brothers, tap dancers from the ‘30s whom he idolized, whose style he adapted to Latin rhythms that were becoming popular in New York City and throughout the world. He added taps to the bottom of his Capezio shoes, and worked from 9 a.m. to 3 p.m. at the Palladium in order to develop choreography for full routines. As a backdrop for his routines, he used music composed by Tito Puente. Initially, he selected a talented young African American named Andy Jerrick to be his partner, however his partner for the longest period was Nicasio Ramos, nicknamed Casitín, who worked at a factory that manufactured women’s hats.

Carlos baptized his partner with the stage name Mike and allowed him to do comic interpretations of a host of famous entertainers dancing the mambo and the cha-cha, including Jerry Lewis, Charlie Chaplin, and even Elvis Presley. Mike, imitating Max Hyman, the owner of the Palladium, used to introduce him by saying: “Ladies and gentlemen, this is how Jerry Lewis does the mambo.” One of the acts on Wednesdays was called "Cha-Cha Taps," and it was an all-around success because it combined tap dancing with the technical finesse of Latin rhythm dancers, as well as for its ingenious comedic elements. Thanks to these routines, Carlos was hailed for having the fastest feet at the Palladium.

Dancing at the Palladium opened the doors for other contracts. Sammy Davis Jr. contracted the pair as part of his show at the Harlem Club in Atlantic City. Sid Bernstein even invited them to be part of his show, “Easter Parade of Stars.” In no time the "Cha-Cha Tap" show’s fate had been sealed, becoming a well-known international ambassador of new musical Latin rhythms on the dance floor.

The cha-cha group tap danced for audiences in different venues: the Palladium, Teatro Puerto Rico, Club Harlem, Apollo Theater, Baby Grand, RKO, Bronx Casino, Brooklyn Paramount, Honka Monka and many, many others that highlighted Puerto Ricans, other Hispanics, and North Americans alike. They also presented their act in a Canada, Hong Kong, Philippines, Japan, Argentina and Puerto Rico. In the U.S., they toured to various cities, including New York, Chicago, Las Vegas, the Mecca of adult entertainment, Miami, and Atlantic City. They were featured alongside personalities from all over the world; including Sammy Davis Jr., Tito Puente, Harry Belafonte, Tito Rodríguez, Pedro Vargas, Mirta Silva, Bobby Capó, Dámaso Pérez Prado, Santos Colón, and many others. Friendships with these artists helped to further Arroyo’s career, as was the case when his friend Tony Bennett came to see his show at the Zabra and ended up joining the act by singing along, and when Pedro 'Piquito' Marcano recommended the duet to the Hotel Flamboyán in Puerto Rico. They were also invited to perform on television in New York on The Tonight Show Starring Johnny Carson, Steve Allen Show, and The Perucho Show, and in Puerto Rico on Bobby Capó and Mirta Silva's shows.

Dámaso Pérez Prado, the Cuban known as the King of Mambo, asked Carlos to choreograph a new dance style— el dengue—which he thought had the potential to replace the twist. They premiered the dengue at the Bronx Casino in October of 1963, doing multiple previews where Carlos alternated dancing with Mike and Marietta, a well-known dance team at the time. Next came The Tonight Show with Johnny Carson and the Hotel Tropicana in Las Vegas for several weeks. Nevertheless, the new dance style didn’t catch on the way Pérez Prado had hoped. Carlos advised Pérez Prado that the rhythm was too fast even for professional dancers and attributes this as the possible reason why it didn’t attract the attention of the public. Carlos performed with Mike of Mike and Marietta, several times, among them at the Club Flamboyán in the Condado district of San Juan, Puerto Rico, where they appeared alongside the Mexican singer Pedro Vargas and the Puerto Rican orchestra leader and composer César Concepción. During this time Arroyo also worked with Bobby Capó on channel 7. It was in Puerto Rico that Mike decided to remain and work instead with the group El Gran Combo; meanwhile Carlos Arroyo returned to New York, where he paired up with the African American dancer Mark Scott. During this period he tried to make his mark as a musician with his group Sextette performing at the Palladium Ballroom. He ditched the idea and dedicated himself to the Cha-Cha Taps, extending his career as a dancer until 1970. 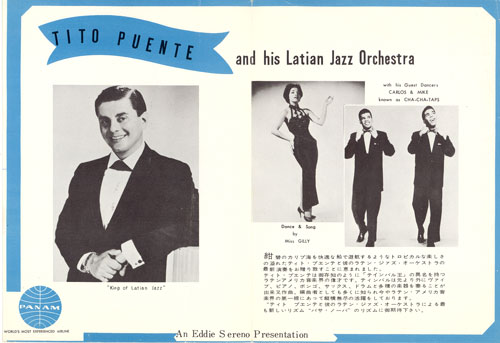 Click on the photograph for additional images. All images from the Carlos Arroyo Collection.
Center for Puerto Rican Studies.

Carlos Arroyo dedicated twenty years of his life to working exclusively as a successful professional dancer. His passion for dance took him all around the world, introducing him and collaborating with some of the best Latin and North American musicians of the ’50’s and ’60’s. Moreover, he can be described as one of the greatest Latin rhythm dancers of the period, as evidenced by his collection of documents at the Center for Puerto Rican Studies. Despite having “retired” as a dancer in order to dedicate himself to other interests, he reappeared as part of a homage to Tito Puente at Yale University in January of 2000, alongside Mercedes Ellington, Duke Ellington’s granddaughter. In September of 2005 he was recognized by the Pierre Dulaine Dance Club as one of the dance celebrities of the Palladium dance era.