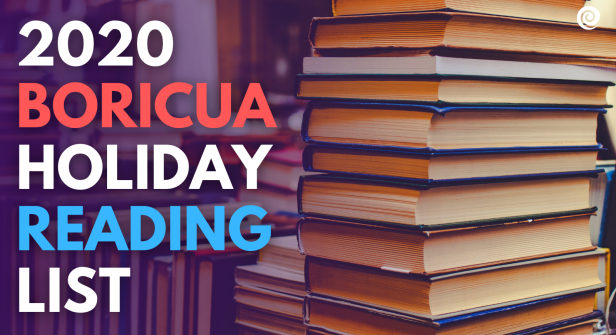 The 2020 holiday season is like no other we have ever experienced.  This year has been a challenging one for most of us. Natural disasters, the financial fallout from the pandemic and social justice and political struggles have reshaped society. We are having to assess and reorient our relationship to our communities, government, and each other; while witnessing the formation of a new normal.

Social distancing has forced us to make changes to our daily routines but has also moved many of us to reinvent ourselves, learn a new skill, take up a new hobby, and possibly gain a new appreciation for many of the things that we had overlooked as a result of our hectic lives.

As we prepare for a social distanced holiday, consider that no matter what is going on in the world, a good book can be a welcomed escape. The Essential Boricua Reading List for the 2020 Holiday Season recommendations can go on your wishlist or serve as gift ideas.  Travel, parrandas and other holiday traditions may have to be postponed until next year, but you can always celebrate by curling up in your favorite chair with a cup of coquito and lose yourself in a book.

The News Media in Puerto Rico: Journalism in Colonial Settings and in Times of Crises By Federico A. Subervi-Vélez, Sandra Rodríguez-Cotto, Jairo Lugo-Ocando (Routledge, 2021)
In the book, authors Federico Suberví-Vélez, Sandra Rodríguez-Cotto, and Jairo Lugo-Ocando, document the impact of the media and colonialism through a variety of sources, studies, literature, and the opinions of 60 prominent journalists from the Island. They also study new technologies, the challenges faced by the news media, their professionals, and journalism education in Puerto Rico. The island of Puerto Rico has been a colony of the United States for 122 years. At the political level it is called an unincorporated territory. https://www.routledge.com/The-News-Media-in-Puerto-Rico-Journalism-in-Colonial-Settings-and-in-Times/Subervi-Velez-Rodriguez-Cotto-Lugo-Ocando/p/book/9780367429034

The Young Lords: A Radical History, by Johanna Fernández (University of North Carolina Press, 2020)
Utilizing oral histories, archival records, and an enormous cache of police records released only after a decade-long Freedom of Information Law request and subsequent court battle, Johanna Fernández has written the definitive account of the Young Lords, from their roots as a street gang to their rise and fall as a political organization. https://uncpress.org/book/9781469653440/the-young-lords/

Agrarian Puerto Rico: Reconsidering Rural Economy and Society, 1899–1940, by César J. Ayala and Laird W. Bergad (Cambridge University Press, 2020)
Fundamental tenets of colonial historiography are challenged by showing that US capital investment into this colony did not lead to the disappearance of the small farmer. Contrary to well-established narratives, quantitative data show that the increasing integration of rural producers within the US market led to differential outcomes, depending on pre-existing land tenure structures, capital requirements to initiate production, and demographics. https://www.cambridge.org/core/books/agrarian-puerto-rico/85A9D4FD4E17AF5EA1DD21CDA80CB50B#fndtn-information

Colonial Migrant at the Heart of the Empire: Puerto Rican Workers on U.S. Farms, by Ismael García-Colón (University of California Press, 2020)
Colonial Migrants at the Heart of Empire is the first in-depth look at the experiences of Puerto Rican migrant workers in continental U.S. agriculture in the twentieth century. The Farm Labor Program, established by the government of Puerto Rico in 1947, placed hundreds of thousands of migrant workers on U.S. farms and fostered the emergence of many stateside Puerto Rican communities. Ismael García-Colón investigates the origins and development of this program and uncovers the unique challenges faced by its participants. https://www.ucpress.edu/book/9780520325791/colonial-migrants-at-the-heart-of-empire

Latin Orlando: Suburban Transformation and Racial Conflict, by Simone Delerme (University Press of Florida, 2020)
Latino Orlando portrays the experiences of first- and second-generation immigrants who have come to the Orlando metropolitan area from Puerto Rico, Cuba, Mexico, Venezuela, Colombia, and other Latin American countries. While much research on immigration focuses on urban destinations, Simone Delerme delves into a middle- and upper-class suburban context, highlighting the profound demographic and cultural transformation of an overlooked immigrant hub.    https://upf.com/book.asp?id=9780813066257

Sunbelt Diaspora: Race, Class, and Latino Politics in Puerto Rican Orlando, by Patricia Silver (University of Texas Press, 2020)
Puerto Ricans make up half of Orlando-area Latinos, arriving from Puerto Rico as well as from other long-established diaspora communities to a place where Latino politics has long been about Cubans in Miami. Together with other Latinos from multiple places, Puerto Ricans bring diverse experiences of race and class to this Sunbelt city. Tracing the emergence of the Puerto Rican and Latino presence in Orlando from the 1940s through an ethnographic moment of twenty-first-century electoral redistricting, Sunbelt Diaspora provides a timely prism for viewing how differences of race, class, and place play out in struggles to claim political, social, and economic ground for Latinos. https://utpress.utexas.edu/books/silver-sunbelt-diaspora

Nuyorican Feminist Performance: From the Café to Hip Hop Theater, by Patricia Herrera (University of Michigan Press, 2020)
The Nuyorican Poets Café has for the past forty years provided a space for multicultural artistic expression and a platform for the articulation of Puerto Rican and black cultural politics. The Café’s performances—poetry, music, hip hop, comedy, and drama—have been studied in detail, but until now, little attention has been paid to the voices of its women artists. Through archival research and interview, Nuyorican Feminist Performance examines the contributions of 1970s and ’80s performeras and how they challenged the Café’s gender politics. It also looks at recent artists who have built on that foundation with hip hop performances that speak to contemporary audiences. https://www.press.umich.edu/6710954/nuyorican_feminist_performance

Revolution Around the Corner: Voices from the Puerto Rican Socialist Party in the United States, edited by José E. Velázquez, Carmen V. Rivera, and Andrés Torres (Temple University Press, 2020)
Active from the late 1960s until the mid-1990s, the U.S. branch of the Puerto Rican Socialist Party (PSP) worked simultaneously to build support for Puerto Rican independence and to engage in radical social change within the United States. Revolution Around the Corner chronicles this unique social movement, describing various mass campaigns and the inner workings of the organization. The editors and contributors—all former members, leaders, and supporters of the PSP—offer a range of views and interpretations of their experience. http://tupress.temple.edu/book/20000000010029

The Cartographic Journey of Lieutenant William H. Armstrong. Puerto Rico 1908–1912) 2 vols., eds. María D. Luque and Lanny Thompson. (Ediciones Puerto, 2020)
In 1900 William Henry Armstrong arrived in San Juan from Massachusetts. He was 26 years old and had recently been recruited by the Department of Instruction of the new civil government of Puerto Rico. He is one of those forgotten figures in the history of this Island.
https://librerialaberintopr.com/products/the-cartographic-journey-of-lieutenant-william-h-armstrong-puerto-rico-1908-1912-2-vols-lanny-thompson-y-maria-dolores-luque-editores

Historians and Rutgers University Professors Dr. Lorrin Thomas and Dr. Aldo A. Lauria-...
So You Think You Can Craft?

In light of several plights affecting our communities, not only on the mainland or the...
Puerto Rican Superheroes You Need To Know

In this day and age, we’ve seen superheroes of all different kinds of backgrounds...