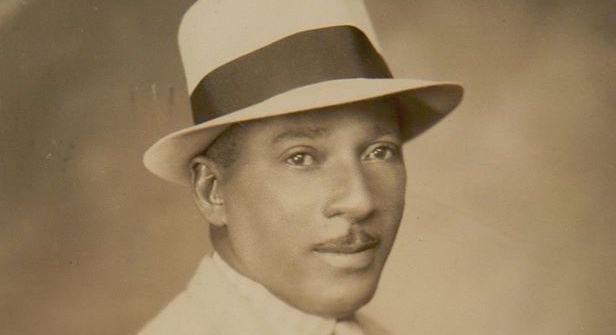 Rafael Hernández was a prolific composer of the popular music of his day, Cuban boleros and guarachas. He is considered not just the greatest Puerto Rican composer but one of the best in Latin America because his songs, such as the anthem, “Lamento borincano,” resonated throughout the region.

He was born October 24, 1891 in Aguadilla, Puerto Rico to parents who were Afro-Puerto Rican tobacco workers. He was one of four children, Victoria, Rosa Elvira, and his brother, Jesús, whose grandmother inspired all the children’s interest in music. She paid for Rafael’s music classes when he was 12 years old. He learned the cornet, trombone, bombardino (valved horn with a range a little higher than a tuba), guitar, violin, and started learning piano.

Around 1914 or 1915 a Japanese circus, the Kawamura Brothers, passed through Hernández’s hometown. The owner heard of Hernández’s musical abilities and hired him to tour the island with them. Rafael made connections in San Juan and joined the Banda Municipal there, which was directed by Manuel Tizol (the father of valve trombonist Juan Tizol). He also played in a small orchestra, The Jolly Boys, as well as played at a theater in Puerta de Tierra, a suburb of San Juan. He played the bombardino bajo in Sombras de la noche, directed by Carmelo Díaz Soler, at the Tres Banderas, the first movie theater in Puerto Rico. He also played violin in the Orquesta Sinfónica of San Juan. It was at this time that he started writing and composing songs.

In 1917 Rafael met the renowned African American bandleader James Reese Europe. In 1910 Europe founded an orchestra of over 100 musicians, and the following year it was the first Black group to play Carnegie Hall. As the U.S. was about to enter World War I, Lt. Europe was asked to organize an African American military band and fighting unit for the segregated army. To complete the band he wanted horn players who could read music so he traveled to the island and recruited 18 Afro Puerto Ricans from the island’s municipal bands. The fact that Puerto Ricans had recently received U.S. citizenship facilitated the recruitment of Puerto Ricans into the military and thus into the orchestra. Rafael Hernández was recruited into Europe’s 369th Regiment band as a trombone player and became a sergeant during World War I. Other musicians who were recruited from Puerto Rico included Rafael Duchesne Mondríguez from Fajardo, who played first clarinet, and Rafael Hernández's brother Jesús. Hernández and the others went to North Carolina for basic training. Europe’s 369th Regiment, which became known as the “Hellfighters,” was considered to have introduced jazz to the European continent. They gained the nickname during their tour of duty for their bravery on the battlefield. After the war the 369th U.S. Infantry band began recording for the Pathé label and toured briefly until James Reese Europe was tragically murdered after a concert by his drummer. The group disbanded and the musicians had to strike out on their own.

Most mainstream histories on the topic of the Harlem Hellfighters tend to downplay or barely mention the role of the Puerto Rican musicians that were involved in the 369th Regiment during World War I. The ten-part jazz history made by Ken Burns is no exception. In fact in his documentary there is no mention at all that James Reese Europe recruited experienced musicians from the island. This may reflect a larger societal problem in that most issues in that U.S. are dealt with through the perspective of race in Black and White only, without taking into account the complexity which defies easy explanations.

Between the two World Wars, as New York’s Puerto Rican community was rapidly growing, New York was becoming the world’s capital for all things related to the music industry: recording, sheet music, piano rolls, and radio. The late 1920s and early 1930s also saw the rise of serious theater, movies, and variety shows organized by professional promoters. Puerto Rican musicians found a welcoming environment in which to make their own music—bolero, plena, danza, seis, aguinaldo—as well as to play in the many Cuban ensembles gaining popularity. Scholar Ruth Glasser, stated that “New York City gave birth to the golden age of Puerto Rican small-ensemble music.” Nonetheless, the songs that were classics among Puerto Ricans were not played outside of the community, whereas Cuban music became widely popular.

In February, 1919, Rafael Hernández returned from the war to New York City, and not being able to find a musical job right away he started working in a factory which made screws and bolts. This didn’t last long, and soon he found work with the Harlem pianist Lucky Roberts. In 1921 he was offered the job directing the orchestra of the Teatro Fausto in Havana and went to Cuba. There he composed the song "Capullito de alelí" and the guaracha, "Cachita," which featured the music of Rafael accompanying verses from the Spanish poet Bernardo San Cristóbal. 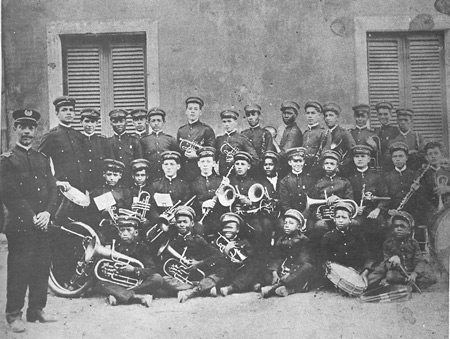 By 1924 he was back in New York City and worked for a group that accompanied the tenor Francisco Quiñones. In 1926 he organized his own trio—with the legendary Manuel Jiménez (Canario) as first voice, Salvador Ithier as second voice, and Rafael himself as the first guitar. Trío Borinquen, as they were called, recorded for the Columbia label. Canario left the group after a few recordings. (He wouldn’t record again until 1929 when he made it big with recordings of the Puerto Rican plena). When Canario left, Hernández replaced him with the Dominican singer Antonio Mesa. In 1928 the group made their first visit to Puerto Rico. They later traveled to the Dominican Republic to perform but called themselves Trío Quisqueya there to appeal to local crowds.

In 1927 Hernández started a music store with his sister, Victoria. The legend has it that the song "Lamento borincano" was composed there. According to Rafael:

Canario became the first of many singers and bands to record it. Composed during the Great Depression "Lamento borincano" is considered his most famous song.

During this time Puerto Rican musicians composed other songs that also are considered standards in the repertoire of popular music and have become unofficial anthems among the Puerto Rican community, such as "Lamento Borincano" by Hernández and "Sin bandera" by Pedro Flores. Music historian Jorge Javaríz comments upon their music: "The bulk of what we call popular Puerto Rican music was written and recorded in New York. Puerto Rico is the only Latin American country whose popular music was mainly created on foreign soil. The curious thing about this phenomenon is that it was precisely in those years that the popular Puerto Rican song became more Puerto Rican than it has ever been before or since" (Glasser 1995: 90).

In 1930 Hernández made his first trip to Mexico. He would end up living there off and on until the mid 1940s. At the end of 1931 he returned to New York City and organized Grupo Hernández to accompany Pilar Arcos on recordings, then signed a contract with Victor Records with Grupo Victoria, named in honor of his sister. Cuarteto Victoria had Davilita as the first voice, Rafael Rodríguez as the second voice, Francisco López Cruz as the first guitar and Hernández as second guitar. (The group was sometimes the cuartet and sometimes it had as many as nine performers).

They made their first recordings in 1933. In 1935 Hernández returned to Mexico and it is during this time that he composed some of his most famous songs, such as “El cumbanchero,” “Amor ciego,” and “Noche y día.” He also worked in Mexican cinema on the music for many films, and appeared in three, Aguila o Sol (1937), El gendarme desconocido (1941) and Carnaval en el trópico (1942) which starred the famous comedian Mario Moreno ‘Cantinflas.’

Back in New York City in 1939, he added a young Myrta Silva to the group, and Bobby Capó replaced Davilita. In 1940 he returned to Mexico where he specializes in harmony, composition, and counterpoint at the National Conservatory. In Mexico he also married María Pérez and had four children with her. He returned to Puerto Rico in 1947 where at the suggestion of Luis Muñoz Marín and Ernesto Ramos Antonini (founders of the Popular Democratic Party and at the time, respectively, presidents of the Puerto Rican Senate and of the House of Representatives) he was named the musical consultant for the Puerto Rican government’s radio station, WIPR, and the director of the station’s Sinfonietta. By 1965 he was very sick from cancer, and on December 11th of that year he passed away in the Puerto Nuevo Hospital de Veteranos de San Patricio.

Throughout Latin America Rafael Hernández was without doubt the most widely known and famous Puerto Rican of the mid-20th century. Together with Pedro Flores, Bobby Capó, Daniel Santos and Mirta Silva he was a Puerto Rican musical ambasador to the world. As wih Flores, Capó, Santos and Silva, for many years he called New York home.

© Elena Martínez. Reprinted by permission in Centro Voices on 4 February 2015.