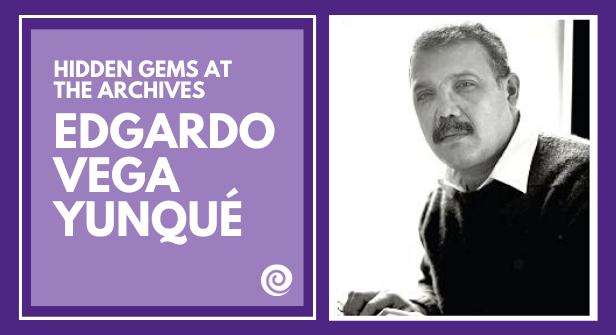 If I had to bring anyone back from the dead, Edgardo Vega Yunqué would be my top pick. My first encounter with his writing was initiated through a course on Latino literature in the United States. Prior to that class, I had read several other Puerto Rican writers–pioneering voices who paved the way for future narratives to emerge, such as Nicholasa Mohr, the revered poet Pedro Pietri, activist Iris Morales, as well as more contemporary writers like Ernesto Quiñonez and Dahlma Llanos-Figueroa.

Most of the authors are recognizable to the eyes and ears, but the mention of Yunqué’s literary works initially didn’t ring any bells. My inquiry about his writing seemed to replicate the same reaction from most people, which did two things (albeit not simultaneously): prompted my curiosity about him as a writer and his writing, and started a new segment that derived from Centro’s Library and Archives.

Centro’s Library and Archives facilitated the research, enabling me to follow a path of bread crumbs leading back in time which would be nearly impossible to do without. The Center for Puerto Rican Studies provides invaluable resources for research and data, and its library and archives hold well over thousands of books, articles, photographs, video and audio recordings. This educational treasure box is located in the historically-enriched Spanish Harlem, offering its services to the public free of charge. While academic-enriched institutions are fact-based, the learning experiences that are given are other-worldly. Upon digging up material about Edgardo, I kept sinking further down the rabbit hole - leafing through pages of numerous personal notebooks, reading his editorials, and catching the beginning stages of short stories that would later result in several awards.

Over the course of numerous trips, I was able to fine-tune Yunqué's voice and channeled his presence through undisturbed folders and manuscripts with ease. Shifting between boxes, papers, cards and correspondences between him and other publishing houses and organizations revealed he was the founder of the Clemente Soto Velez Center. Learning this made total sense due to his love for Puerto Rico. The name for the center was a no-brainer–Clemente Soto Velez’s legacy and engagement with activism echo many of Yunqué’s values, especially because of his own family’s involvement in Puerto Rico’s long-time struggle for independence. In one of his letters, Yunqué mentions the center was a “mammoth project” that deviated him from writing as much as he wanted but was happy that it finally came to fruition in 1993. Even when he wasn’t writing, he was still active in the writing sphere by either teaching creative writing at Hunter College and Hostos Community College or engaging with other writers.

Like many, if not all writers, Yunqué had his fair share of rejection letters - although plenty of his short stories were first published in magazines before being included into his collections, such as the popular Mendoza’s Dreams and Casualty Report. Editors often made comments on his talent for writing fictional dialogue in a vernacular manner, ones which frequently included witty humor and satire. His fictional short stories also engage in much more critical topics dealing with economic class, color, and race. The characters and worlds he created seamlessly come to life and relate to the reader, no matter how seemingly mundane, fantastical or farfetched, like the disillusioned clown who eventually marries a nun or Afro-Puerto Rican professor Lou Torres who struggles with his identity.

Before his passing in 2008, Yunqué's novel No Matter How Much You Promise to Cook or Pay the Rent You Blew It Cauze Bill Bailey Ain't Never Coming Home Again was finally published in 2003. Although the novel was complete and ready for publication a decade before, Yunqué grappled with publishers when they suggested he should consider another publishing house that was geared towards ethnic writers. While many of his stories included fictional narratives involving issues surrounding the Puerto Rican diaspora, Yunqué argued the novel wasn’t a “Puerto Rican” story, and to market the book that way was to propagate the marginalization of Latino writers and devalued his work.

Edgardo Vega Yunqué was certainly a man of his time. Many of his experiences in the armed forces and the influence of other writers can be seen, such as Ernest Hemmingway’s knack for incorporating character dialogue and William Faulkner’s subtle foreshadowing and critique of social class. Like many trends that fade and come back, it is the same as with writers, and although it has been well over ten years since Yunqué’s departure, his legacy still lives on through the emerging writers today.

To read more on Edgardo Vega Yunqué, visit our Centro library. Click here for a complete list of all in-house archives related to Yunqué.