Hiram Maristany's Anchor Exhibit: Securing the Past, Present and Future of El Barrio 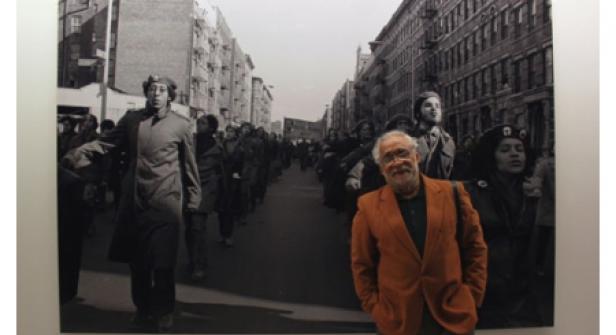 From college freshman girls who said sorry every time their backpacks hit someone to men in three piece suits who held their cups of wine with napkins.  From abuelas in wheelchairs to a five year old girl on her father’s shoulders, everyone stood together on a March 25th evening as the opening speeches of the Anchor exhibit started. “It is here where we are integrating art with community,” said Hunter College President Jennifer Raab.  Looking out into the mix of people at the Silberman School of Social Work at Hunter College she continued, “and what it tells us about our history and community.”

The crowd had gathered at the Hunter East Harlem Gallery located on E119th St and Third Avenue, the heart of El Barrio, to experience the first night of Anchor, an exhibit of never before seen photographs of Hiram Maristany.  Maristany, who has been documenting Puerto Ricans communities especially his home El Barrio for over forty years, not only unveiled over 30 photos of his personal collection to the public, but also collaborated with six contemporary artists.  Each artist chose five of Maristany’s photos as a focal point and combined them with their own stylistic elements to create new pieces of their own, “An exhibit like this has many layers,” said Maristany, “(We are) Having it in El Barrio to serve El Barrio and not just the Boricuas but everyone in the community.” 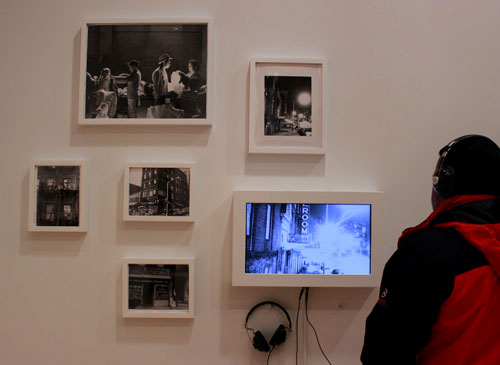 Maristany is best known for being the official photographer of the Young Lords in New York, a cultural and political organization that formed during the late 60’s in Chicago. Inspired by the 1960s resurgence of the fight for Puerto Rican independence, the Cuban revolution and motivated by the Chicano, Civil Rights and Black Power movements, the young Puerto Ricans who were born and raised in the city, formed the New York chapter of the party to fight for their underserved communities and to reinvent what it meant to not only be Puerto Rican but also an American, “It shows the beauty and the power,” said Maristany when asked of the exhibit’s importance.  The photographs of families hanging out in their fire escapes and a mother holding out a shirt to her smiling daughter at a clothes drive spoke of just how well Maristany also depicts the everyday people of El Barrio “It’s not to talk about what’s wrong with us but what’s right and that’s not the story always told.” 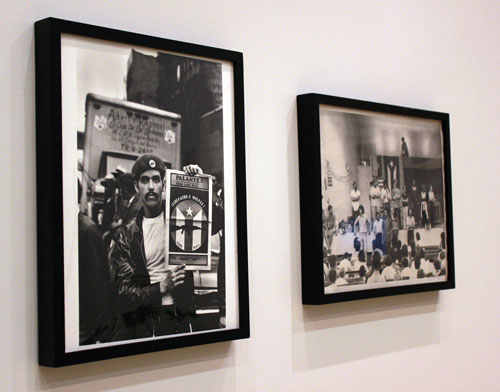 Felipe Luciano, a co-founder of the New York chapter of the Young Lords, spoke to those who had gathered and said, “When you’re a warrior you don’t think about legacy.  Hiram has always had an incredible ability to capture history.”  The poet, community activist, and politician who in Maristany’s photographs of Young Lord rallies and meetings could always be seen at the forefront urging the organization’s followers to unapologetically fight for what was rightfully theirs, looked back at the blown up photos of the Young Lords marching and of kids playing in the streets and said, “I think of all the ancestors who had the hope and expectations that their kids would have a better life, the memory of all the men and women who died for us.” 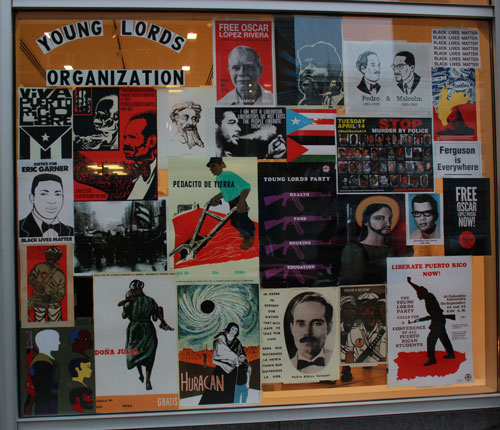 Outside, a small portion of the mob consisting of the academic elite, guys from around the way in baggy pants and Yankees baseball caps, and Maristany’s family and friends, gathered in front of the gallery’s window on E119th St.  Holding their professional Casio cameras and IPhones steady, they captured the reincarnation of the Young Lord’s office window.  One of the artists, Miguel Luciano, had recreated the storefront window to a T with posters of the Puerto Rican nationalist leader Pedro Albizu Campos, the Latin American revolutionary Che Guevara and the Young Lords own that read “house, food, housing, education.”

Inside, the crowd took a tour of Maristany’s signature black and white photographs that stood alive on the white backdrop walls and some signed up to sit and chat with forensic sketch artist Stephen Mancusi. Under a studio lamp that hung over his drawing table, the artist detailed one conversation where a woman tried to remember her grandfather who passed away 40 years ago, “She was 6,”pointing to a sketch of a man with a full head of hair and mustache, “For a moment it all came to her.  It came back to life.”

Pride, passion, and remember. These words rang true throughout the night starting with Luciano who said, “…these are your ancestors.”

The happenings of the night and the collaborations with the artists of whom also include Nicole Cohen, Selena Kimball, Steven Perez, Saul Williams, and Caroline Woolard, is just the beginning and one aspect of the exhibit.  The presentation of the photographs at the gallery acts as the spark to other projects where the artists will help spectators and visitors experience what makes El Barrio, El Barrio.  The artists, who were chosen due to their work in the community, will hold public projects that span from April through June.  Such events include a walking tour of El Barrio, a film installation in one of the neighborhood’s churches and a kite building workshop on the Silberman School of Social Work rooftop.  Maristany will do what he does best and photograph each and every project to produce a catalogue that narrates all the parts that make the exhibit.  Although a mentor to many of the artists he’s collaborating with, Maristany is grateful for the work he’s able to do with the Anchor artists, “They’ve made me see what I didn’t see.” 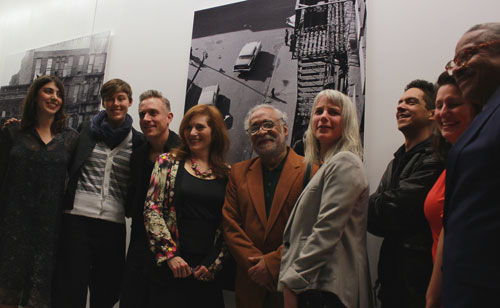 Maristany wants Anchor, the exhibit that he’s been working on for a long time through the help and support of The Center for Puerto Rican Studies, The Office of the President of Hunter College and other donors, to lure artistic creation fixed and secured on the history of the East Harlem neighborhood and the Puerto Rican community.  He wants everyone to engage in a conscious conversation about the past, present, and future identity of the community.  Luciano added to the notion by saying, “We can build out of this a matrix, a universe of pride and empowerment.”

Maristany closed the opening words of the exhibit by saying, “I was told I was going to be a failure.  There were days that I didn’t even want to do this.  But it’s about doing it even when you don’t.  You have to have heart.  You determine who you are.  Do something that will mean something even to the people you don’t know.  Be about each other for each other.”