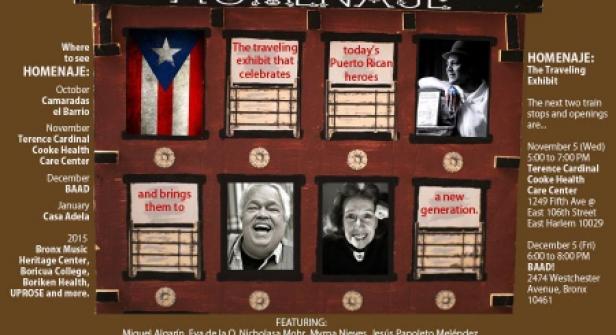 We have a very special place in our hearts for this issue's Homenaje. Nicholasa Mohr is not only one of the principal figures in Puerto Rican literature in the United States, and one of the first voices of Latino literature in the United States, she is also one of the first Puerto Rican women writers to produce work in English. She is best known for her works Nilda (1973) and El Bronx Remembered (1975). Rituals of Survival (1985), a collection of feminist short stories, was the first book by a Hispanic writer to receive a legislative commendation. The accolades are deep, but in the story below Ricardo Muñiz brings us a more intimate, powerful, look at this literary pioneer.

Nicholasa Mohr lives in a museum—a comfortable, welcoming museum—but, a museum nonetheless. She took me on a tour of her artwork and sculptures and furniture and statues. Quick-witted and sharp-tongued, Nicholasa had a story to tell with each one. This was painted by this one. That was done by that one. This I bought from a farmer. That was payment from someone who stayed on my couch. This was a present from an ex. That I kept and I got rid of the ex. Each story was big and grand and funny and interesting. After just a few moments, it is easy to understand her great success as a writer: Nicholasa knows how to tell a story.

“I always had the ganas, the desire,” Nicholasa begins. “I always had something to say, so my mother, I think, gave me plenty of pencils and paper just to keep me busy. There was no TV in our house then, so I had to create my own magic.  I got so good so quickly that I began helping other Puerto Ricans in the neighborhood because many of them couldn’t speak English and many more couldn’t write. So, I filled out their forms. Writing for me had a purpose.”

As she got older, Nicholasa began telling stories—not through writing, but through her art. She actually had a very lucrative career in her 20s as a visual artist and printmaker. Her foray into writing was accidental. She published one article on Latino art and was soon contacted by Harper’s.

Nobody was writing stories about Puerto Rican families and children, so “I took the challenge.  Writing took me to marvelous and magical places.  Because I had done so much writing as a child, writing now as an adult was no stranger.” 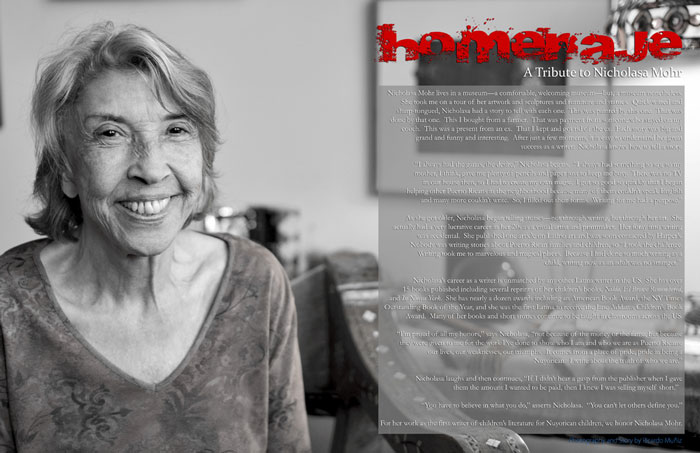 Nicholasa’s career as a writer is unmatched by any other Puerto Rican writer—male or female—in the US in terms of total sales. She has over 15 books published including several reprints of her children’s books, Nilda, El Bronx Remembered, and In Nueva York. She has nearly a dozen awards including an American Book Award, the NY Times Outstanding Book of the Year, and she was the first Latina to receive the Jane Addams Children’s Book Award. Many of her books and short stories continue to be taught in classrooms across the US.

“I’m proud of all my honors,” says Nicholasa, “not because of the money or the fame, but because they were given to me for the work I’ve done to show who I am and who we are as Puerto Ricans: our lives, our weaknesses, our triumphs. It comes from a place of pride, pride in being a Nuyorican. I write about the truth of who we are.”

Nicholasa laughs and then continues, “If I didn’t hear a gasp from the publisher when I gave them the amount I wanted to be paid, then I knew I was selling myself short.”

“You have to believe in what you do,” asserts Nicholasa.  “You can’t let others define you.”

For her work as the first writer of children’s literature for Nuyorican children and as the most commercially successful writer celebrating Puerto Rican life on the US mainland, we honor Nicholasa Mohr.

© Ricardo Muñiz. Published by permission in Centro Voices on 13 March 2015.