HOMENAJE: A Tribute to Bill Aguado 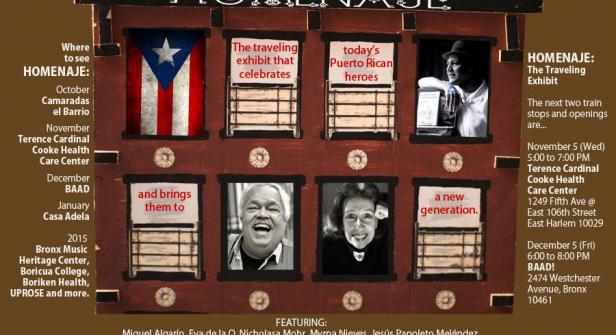 In Catholic-based religions, there exists a select group of people recognized as special protectors, guardians and heavenly advocates over areas of life including occupations, crafts, causes and illnesses. Although they have transcended to the metaphysical realm, with prayer they intercede on behalf of their devotees. Followers lay out an offering of fruit or flowers. They light a candle. They ask these special protectors for help. In the Bronx, such a man, a living one, has been helping others for the past 33 years. His affinity for and devotion to the arts has earned him the special moniker, the Patron Saint of the Arts. This man is Bill Aguado. Although he is now retired as the Executive Director of the Bronx Arts Council, his role in the creation, the fostering, and the building of dozens of arts programs in the Bronx is nothing short of amazing. “I’ve been committed to the arts and to artists, to helping them realize their goals. It’s the people of our community who are supposed to be remembered. We need to make sure they are recognized.” Bill stands on the steps of the Bronx General Post Office on the Grand Concourse, gently but firmly leaning on his cane. With sweeping statements, but small hand movements, he stresses the importance of the arts in the definition of a struggling people. He chooses to be photographed here because of the parallels he sees between its inevitable sale and the struggle for survival by PuertoRican Americans. The exterior of the building is landmarked, but the 13 murals celebrating the dignity of labor inside are not. Bill knows it is the history of the forgotten we must really remember if we are going to know ourselves as a people. 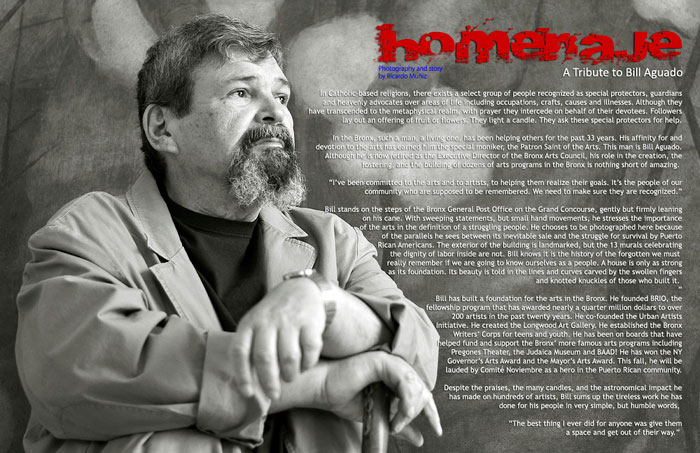 A house is only as strong as its foundation. Its beauty is told in the lines and curves carved by the swollen fingers and knotted knuckles of those who built it.

Bill has built a foundation for the arts in the Bronx. He founded BRIO, the fellowship program that has awarded nearly a quarter million dollars to over 200 artists in the past twenty years. He co-founded the Urban Artists Initiative. He created the Longwood Art Gallery. He established the Bronx Writers’ Corps for teens and youth. He has been on boards that have helped fund and support the Bronx’ more famous arts programs including Pregones Theater, the Judaica Museum and BAAD! He has won the NY Governor’s Arts Award and the Mayor’s Arts Award. This fall, he will be lauded by Comité Noviembre as a hero in the Puerto Rican community.

Despite the praises, the many candles, and the astronomical impact he has made on hundreds of artists, Bill sums up the tireless work he has done for his people in very simple, but humble words,

“The best thing I ever did for anyone was give them a space and get out of their way.”

© Ricardo Muñiz. Published with permission in Centro Voices on 6 November 2015.