Interview With The Color Brown 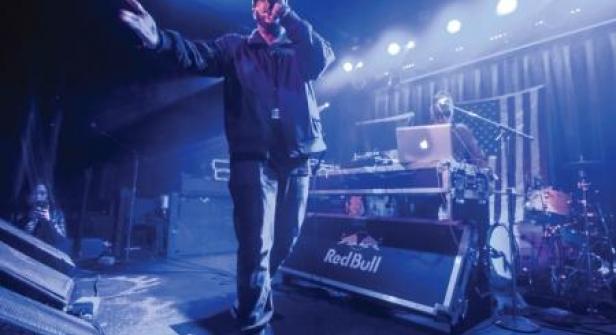 Last month, poet turned rapper Rúben Borrero opened up for the godmother of Spanish hip-hop, La Mala Rodriguez, in Chicago. Only a few months earlier, he had released a video in which he recites the poem “100x35”, a collaboration with Starving Artists and Stand Up For Puerto Rico as part of the Tierra Prometida series. The spoken word piece, whose title references the dimensions of the islands in miles, is an extension of his socially conscious lyricism and cool-paced flow. In this interview, we talked with The Color Brown  about his origins as an artist, the move from Carolina, Puerto Rico to Chicago, and what to expect from him in the near future.

Centro: What came first, rap or poetry? And how do you see the two related in your work? What do you like about poetry versus rap and vice versa?

Rúben Borrero (RB): Poetry came first for me. I started writing early (when I was around 11 years old) and when I was introduced to Hip-Hop I started experimenting with music. One advantage of poetry is that a writer is not constricted to a specific metric, which allows me to say more without compromising the sound of the piece. To a certain extent, writing poetry comes easier for me than writing music. However, the beauty of composing verses for a musical piece is that my voice is merely another instrument, and the flow and rhythm of a beat can help your words and your message to be more powerful.

Centro: Can you briefly discuss how you began performing poetry?

RB: I started performing poetry when I first moved to Chicago back in 2006. I had written a lot of pieces before that, but I never had the courage to perform it in front of other people. I started following open mics around the city on social media and tried to make it to all of them. It was therapy for being far away from home. A way to deal with all of the emotions that came from being a new place.

Centro: Can you talk about your stage name, The Color Brown, and what it means to you?

RB: The Color Brown is a play on words that, in a way, describe my identity. Being in Puerto Rico, I never had to identify myself with a specific race or ethnicity, as everybody in Puerto Rico considers themselves Puerto Ricans. But when I came to the US my identity started shifting, and I saw myself as a Latino for the first time. One day I was in a sociology class and I remember my teacher using the word "brown folks" to refer to people of Latin American descent, and that’s kind of how the name came about.

Centro: What was your experience of writing and filming a poem like “100x35”?

RB: The poem 100X35 was inspired by the current economic crisis going on in Puerto Rico. It is extremely frustrating to be living outside of the island and feeling like you can not contribute in a meaningful way to the progress in the island.

#LaTierraPrometida was an initiative created by Edward Diaz, the founder of Starving Artists and a longtime friend of mine with the collaboration of #StandUpForPuertoRico, that strives to highlight artists that are using their craft to highlight and bring attention the political and financial crisis in the island. I had the opportunity to record this poem last time I was in Puerto Rico with the help of Edward and Rodolfo Molina.

Centro: You have a long, diverse list of influences, are there any primary or initial influences that had or still have a big influence on your style?

RB: I grew up with Salseros in my household, so there are many soneros that have influenced me, such as Ismael Rivera, Marvin Santiago, Cano Estremera, Luigi Texidor, Cheo Feliciano. I also grew up around trova cubana, so artist like Silvio Rodriguez and Pablo Milanes served as writers that I really admire from a really young age. When I first heard the album "El Abayarde" from Tego Calderon in 2002 it blew my mind, since for the first time I was exposed to latin rhythms being infused with "dembow" and urban sounds. As I was more exposed to hip-hop, I started to listen to Chicago based MC's such as Common, Lupe Fiasco, Kanye West and Rhymefest, which have all been great influences on my music. Other singers that I really admire are: Willie Rodriguez, La Lupe, Siete Nueve, Velcro, Chance The Rapper, Morodo.

Centro: Can you describe what it was like moving from Puerto Rico to Chicago as an artist?

RB: My journey as an artist started after I moved from Puerto Rico and, in a way, I do not think I would have developed into the artist I am today without that shift. Moving from Puerto Rico really affected my life in many different ways, so writing was the way I coped with the change. I wished I had the experience to be an artist in Puerto Rico, since, I believe, my music is more appealing to the audience in the island (mainly due to the fact that I write in Spanish), but the people that I’ve come across in this journey down the windy have been amazing, and I’ve created strong bonds with many artists on the Chicago scene that have translated into very nice projects.

Centro: Are you working on a particular project at the moment or have any specific plans in the near future?

RB: I am working on many projects at the moment, collaborating with artists like Bumbac Joe, Mateo Zapata, Skeptic, and Madvado in a series of tracks that are coming out very soon. It is also my goal to come out with my official first album in 2017, so I am looking forward to all the growing pains that come from creating something like that.

To listen to The Color Brown, check out his Soundcloud page.