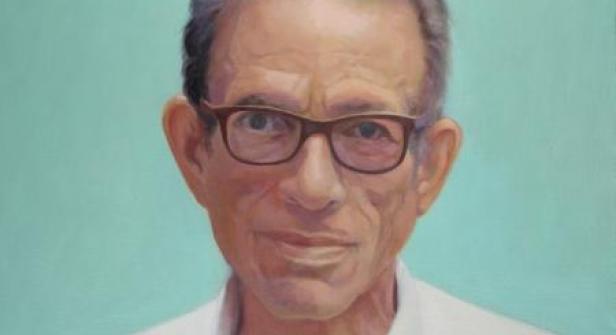 I overhear an older woman leaning toward her friend to tell her, “Es un Da Vinci,” as they each take another astonished look around the room. The friend nods while waiting to speak with the artist.

The Puerto Rican Da Vinci, I correct her in my head, as if the crudeness of her innocent remark was somehow incomplete.

Jorge Luis Rodriguez, standing in the corner, has spent the past hour presenting a selection of his work, some of which is scattered around the Centro Office at the Silberman School of Social Work in East Harlem. His exhibition is part of an ongoing series entitled ARTcHIVES: Method and Documentation that offers “a glimpse into understanding how works of art were conceptualized, developed, produced, and documented.” Originally slated to be installed for two months beginning in late 2015, it was extended for seven due to its popularity.

The concept of a Renaissance man, when applied to Rodriguez’s oeuvre, isn’t a stretch. Da Vinci was a polymath, meaning ‘a person of wide-ranging knowledge or learning’. Looking at his exhibit, I see a range of sculptures, paintings, drawings, etchings, carvings, and more; that also represent diverse interests in religious iconography, architecture, and colonialism, among others.

Each piece appears to be a fully formed universe, a research project that the artist often commissions for himself through an ever-expanding sense of where logistics and imagination can meet.

It has been a productive year for Rodriguez, who retired from teaching posts at SVA and CUNY in 2003. His work has recently been featured in several public spaces around the city, including Tompkins Square Park, and Harlem Art Park where his most famous sculpture “Growth” has stood since 1985.

Rodriguez first came to New York City when he was just 19-years-old, having eschewed–in his opinion–the rigid, traditional approach to technique that governed the education system in Puerto Rico at the time. (He would later be invited as a visiting professor to the School of Plastic Arts in San Juan). Rodriguez came to New York to live with his brother and father, in hopes of receiving a more experimental, vanguard style of training. During that time he also worked for several years as a Junior Art Director before applying to school. From there, he studied at the School of Visual Arts and New York University where he received his B.F.A. and M.A., respectively.

Rodriguez’s early paintings were influenced by the Optical-Art, or Op-Art, a popular movement at the time. He then transitioned to Minimalism, which had also become an especially iconic art movement in New York City. Eventually, Rodriguez would learn to express abstraction, the illusory component of Op-Art, within a minimalist aesthetic. The result is a work of art stripped of its inessential qualities, interpreted through an abstract lens. In 1972, shortly after completing a painting entitled “The Wait, ”Rodriguez recognized that his work would have to move beyond the two-dimensional plane of the canvas to achieve the effect that he was seeking.

To understand this process, think of it like this: you take a figurative concept, like a character from a Greek myth–Narcissus, for example–as inspiration. Then you choose a medium, metal vanity dressers in this case…(to represent vanity). Finally, you break the story into four essential elements and, through a set of four vanity mirrors, interpret the myth as a visual sequence.

Rodriguez appropriates these concepts by focusing on the relationship between fauna to flora, man becoming plant, in four stages. The result, Metamorphosis, involves merging concepts, finding an internal logic to them that can be expressed visually through various techniques and materials.

This requires a significant commitment from the artist and often provides him with opportunities to maintain a certain kind of fluidity in his work, i.e. a sketch could transform into an etching and then ultimately become a sculpture–through a process that can take years.

However, the cross-referencing within his own body of work is a reflection of the many disciplines incorporated into his studio work. Photography, woodwork, welding, drafting, ceramic-making, mixed media, painting, etching, etc. The list goes on. Rodriguez’s studio is littered with the machines and tools necessary for this work. They may, in some instances, only have served a singular purpose in a given moment, but that too is part of the process.

At the top of the staircase in his home, located in a beautiful three-story building in Brooklyn, there is a scaled down version of “Growth.” A bird, a tree, an insect. Like much of Rodriguez’s work, the sculpture relies, in a literal sense, on the viewer’s perspective. For Rodriguez, it represents a childhood memory in Puerto Rico. But it can also represent posterity, one that is defined by contrasting ideals.

“Growth” was not designated to be a permanent installation. Rodriguez simply saw an opportunity to stretch the city’s meager budget and it still stands thirty one years later.

This is a posterity divided between a permanent mark on the landscape of a rapidly changing city, and a reminder of the human spirit’s perpetual need for growth–regardless of past, present, and future. It can mean posterity also in terms of laying down roots in an unexpected place, as is the case for many Puerto Ricans.

Those roots now extend to a younger generation of Puerto Rican artists like José Soto, whose piece “Focus”, is part of the exhibition Growth: Three Perspectives. Featuring another piece by artists Erin Treacy and Kara Schmidt, the the exhibition explores the concept of growth alongside Rodriguez’s iconic installation. Soto’s piece will be on display through November 1st. Rodriguez’s piece will be there for as long as those roots hold–which they’re bound to do.

For an extended look at the artist's work, check out this video segment produced for Puerto Rican Voices.