La India and Her Feminism: An Exclusive Video Interview 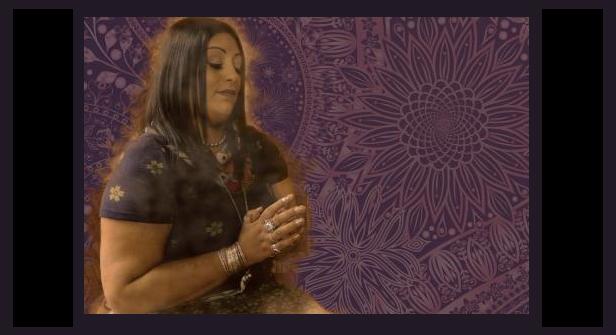 When I was invited to interview Linda Viera Caballero, better known as the Salsa Princess: La India,  the first thing that came to my head was “Love and Happiness,” a house music soundtrack that guided a substantial amount of my life when I lived in the San Diego-Tijuana border region. Love and Happiness is a tribute to the intersection of two waters, Yemaya’s(the goddess of mother ocean in the Yoruba religion) salted water and Oshun’s (the yoruba religion deity manifested as the river) sweet water. This track calls for the intersections between spirituality and religion by referencing terrestrial and cosmic elements. It is a fierce representation of feminism beyond the articulation of her song lyrics and stage presence. Her voice functions as a bridge between languages, cultures and genres.

I visited La India one year after her interview with Nelly Carrion “la muñequita”  on her radio show “Lo que pasa en NY”. I arrived at her home, just across the Hudson river, minutes before scheduled.  Ruth Laviera, the hair guru who was once Celia Cruz’official hair stylist, directed us to La India’s house. It was full of action: an extended loving family surrounding her and her business crew organizing a packed schedule. The space had a spiritual energy about it and a couple of loud parrots that chose to participate in our interview the moment that La India started speaking. My partner and I set up and looked on, as La India polished her on-camera look. Watching her put the final touches on her meticulous South-asian inspired make-up was like looking at an Indian goddess prepare for a Bollywood film performance.

India’s musical trajectory was graced by the guidance and collaboration of a number of salsa music giants. She trained with all-star timbalero Tito Puente and Celia Cruz became India’s madrina/godmother and a feminist role model.  Oscar de Leon was part of her extended music family. She debuted her first Rumba with acclaimed Latin Jazz pianist Eddie Palmieri. The essence of these iconic salsa legends permeated throughout her home. The backdrop for her adopted musical family and sonorous upbringing was New York City and the Bronx, the borough where she grew up.

Still, what I set out to find out about was La India beyond salsa and superstardom. I wanted to learn about India's voice and her feminism.

Indiana, as her grandmother called her, described her mom as someone who sang opera and often returned home with dance trophies from the cities hottest salsa clubs of the ‘70s, like El Corso. India’s grandma was a gospel singer at a black church in their neighborhood and sang her to sleep nightly. Her cousin was a rapper. In highschool, India discovered that her voice registered higher than her mothers’, and grandmothers’, and that she could sing in first soprano. When India crossed over into the salsa scene, her unusually high pitch wasn’t exactly welcomed.

While India elaborated on her experience crossing over into the Salsa scene, I began to contextualize. Historically, opera singers have been accused of uttering “unarticulated screams.” In fact, female opera singers have been catalogued as “uncontrollable hysterics,” according to scholars like Zizek. (1996: 148)  Similarly, India’s voice has been catalogued as either sublime or the opposite, an un-trained, unruly grito, an utterance pertinent to the stereotypical “hysteric” uncontrollable female mentioned above. Some feminist scholars like Frances Aparicio have theorized that this grito, this scream, is one that functions as a call for war and liberation, again, a sense of uncontrollable power but this time on the side of the subaltern.

Following a femina tradition of self-pleasure via the voice and the “hm” - which can be heard in Graciela Grillo’s  “Si Si No No” and La Lupe’s rendition of “Fever,” India’s voice could not be regulated within salsa’s masculinist world because her voice actually exceeds musical notation. India’s unruly voice epitomizes a self-enjoyment that is impossible to police in any musical sense. While India’s lyricism and songs are known for empowering women, it’s her voice and it’s innate quality of self-enjoyment -an implicit sexual pleasure- that is her most powerful feminist stance. Her natural pitch and unique take on women make her the leading face of unparalled success in a music industry that is male dominant.

India’s musical evolution occured during Fania’s era, a complicated musical period in the genealogy of Puerto Rican music in the diaspora in New York City. As she grows up, the boogaloo (the first musical manifestation of the Puerto Rican experience in English) undergoes a rapid rise and fall and the Fania record label creates the  “salsa” musical category. From the outset of her career in the genre, it was noticable that India did not exclaim "Azucar" or deliver in the same way that Celia Cruz did. Instead, her style was influnced by sounds that were prevalent in the Bronx at the time---R&B, soul, house, disco, hustle, and salsa. She also witnessed the birth of hip-hop.

La India recorded her first song when she was 14-years-old after meeting Little Louie Vega. Together, they formed part of TKA, a freestyle group, to release their first single. (see minute 4’33 of the “Freestyle Honor Awards” in Orlando Florida, hosted on November 8th. 2014.)

India’s freestyle stint started in the 80’s. By the late 1980s, Marc Anthony was singing soul and house in English. In 1988, Tito Nieves crossed over to Anglo radio stations with the release of “Tender Love” a bolero off of his first album entitled The Classic. Meanwhile, hustle dancing and house music are ongoing frequencies almost in competition with boricua hip-hop rappers and b-boy dancers.

Even though India recorded “Breaking Night”, a house music CD produced with Little Louie Vega in 1990, this did not deter her from her destiny as a popular voice in salsa music. Originally, her producers slated her to become the Latina Madonna, and this led her to chose a singular stage name to compete with Madonna herself. With the help of her grandmother Justa Guadalupe, she adopted the name India.

While she didn’t exactly become the Latina Madonna, she did take a stab at it in her video entitled I Can't Get No Sleep, choregraphed by the legendary Willy Ninja, the godfather of Voguing. The N.Y.C. voguing scene central to this video is a Latina/o and African-American gay dance culture which aesthetically enacts the gestures and aspirations of  white America portrayed in magazines like Vogue. In this video, India’s queer performance embodies multiple genders: the female bride, her male mate and a widow or señorita. From this surreal experience, India crossed over into the pan-latino/a salsa world.

Eventually Fania collapsed and India captured the attention of entertainment impresario Ralph Mercado, one of the most successful salsa promoters in history. Mercado’s collaborator, Sergio George brings India’s individual style to life and transforms her into the primary transmitter of the authentic Nuyorican sound of that generation. She ushered in the era of salsa romántica.

Some call the introduction of Salsa Romántica the “the death of Salsa,” because this is when Salsa dura began to fade out. Scholar Chris Washburn has argued that India's incorporation of “house and sound music styles into salsa greatly revitalized the scene in the mid 1990’s”. He also says that she was among the first females to prove that and women could indeed have a “commercially successful salsa career” beyond Celia Cruz and La Lupe. (2008: 163) Moreover, according to Aparicio, it was the “oppositional content of their songs, their control over the production and composition, and the degree of performativity [that] destabilize fixed notions of gender”. She added that female performers like La India produced “an important shift towards a growing female visibility in U.S. and Puerto Rican salsa scenes.” (1998: 174)

Journalist Gabriela Sierra Alonso recalled her performance at Barclay’s center during the summer of 2015.

“When La India sang Ese Hombre, almost every single woman in the place was on their feet singing as loud as they could. It was like a group therapy session for Latina women,” she said. “The truth is, so many Latina women are, or have been victims of machismo and have few outlets where they can talk about it freely. They are enraged, and so many of La India’s songs encompass that and invite them to unleash and let go of their negative relationships, or experiences.”

India's salsa singing continues to be unruly. With her harmonic back-beat-use of gospel and r&b, she takes over the primacy of the drums and churches-up the salsa sound. On stage, she queers-up her performance persona with multiple gender and sexual identifications. Her voice serves as the bridge between the anglophone and Spanish speaking Caribbeans, gospel and mambo. India’s “scream” reverberates alternative female imaginaries within house, hustle and salsa. Over the years, La India has crossed spiritual, sonic, and cultural borders and her voice has strenghtened and moved young women and musicians everywhere. Long live Love and Happiness.