Mellifluous and Multi-syllabic: An Interview with Lydia Cortes 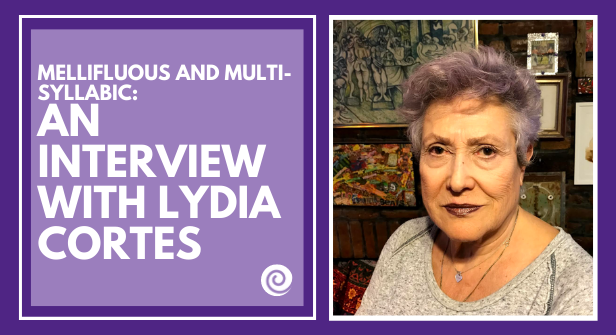 Lydia Cortes is the author of the poetry collections Lust for Lust (Ten Pell Books) and Whose Place (Straw Gate Books). Her work appears in the anthologies: On the Road Monologues, Through the Kitchen Window, In Praise of Our Teachers, Affirming Diversity, Puerto Rican Poetry: An Anthology from Aboriginal to Contemporary Times, and Breaking Ground: Anthology of Puerto Rican Women Writers in New York 1980-2012. Recent work has appeared on the Black Earth Institute’s 30 Days Hath September poetry feature, curated by P.S. Jones; in Poems in the Aftermath and What Rough Beast (both Indolent Press); Resist Much, Obey Little: Inaugural Poems to the Resistance (Dispatches Editions); and Upstreet. She is interviewed by Ivelisse Rodriguez, creator of the Puerto Rican Writers interview series.

Ivelisse Rodriguez: You are the author of two poetry collections: Lust for Lust (2002) and Whose Place (2009), and your poetry is so multi-faceted—it is playful, lustful, and yearning. It touches on bilingualism, dreams of Americanization, and loss. What do you hope your work offers readers?

Lydia Cortes: I’m so happy to hear you found my poetry playful, lustful and yearning…Gracias! I would hope my work offers readers some of the same outcomes you felt. I hope some can identify with the feelings I’ve experienced as an outsider and know they are not alone. I hope readers will enjoy the work and find the humor. I hope some will be inspired to write about their lives.

IR: So what are you working on next?

IR: “I lust for lust” starts the titular poem of your first book, Lust for Lust (2002). Love is given such supremacy in our culture, but you venerate lust. Can you discuss the value of lust, and why you think that love is privileged over lust?

LC: It’s not that I venerate lust as much as I see its power. I titled my book and the titular poem “Lust for Lust” to be partly tongue in cheek but also to recognize the pull and strength of lust. In many relationships, at least in the beginning, it’s lust that puts into motion the sexual attraction and excitement that eventually may or may not lead to love. In our society, it’s fine to talk about love while lust can be seen as somewhat shady…perhaps due to the pleasure involved?

IR: Some of your poems riff on words. For example, in the poem “Wine Because Wine,” you write, “Vino. Vino. Wine wine. Came came.” In “Sonforoso,” you write, “sin fo ro so / sin for us…oh! / sing for us”. As a poet, is this how you experience/hear language in everyday life? In other words, when you are just going about your day, are you constantly making word associations and playing with language?

LC: Yes, I love riffing on words, I love words! I love the Spanish words of my first language, so mellifluous and often multi-syllabic, like my father’s old-fashioned middle name, Sinforoso… I love English words, many of which were exotic and unknown as a child-like “reddish”…I love Italian words, which can be chewy and chunky…I lived in Rome for a time during the late 60s, early 70s. Sometimes a poem does start with a repetitious riff I hear in my head. Sometimes I’m lost in words. Sometimes found. Sometimes I’ll see a word in English but read it in Spanish…like once upon a time, I read once as eleven which is what it is in Spanish.

IR: Growing up in New York City during the 1970s, you would have had a view of the burgeoning Nuyorican poetry movement. In Whose Place (2009), you write two poems about Pedro Pietri. Can you discuss what it was like to watch this literary movement flourish and if at the time, you knew you were witnessing something important?

LC: I actually grew up in New York City in the 50s at a time when the mass Puerto Rican migration was just beginning. At the time, there was very little outside my home that I could identify with culturally or linguistically. When I entered public school, I had to learn English; I was lucky to have a loving and kind teacher, Miss Powell, in second grade who made the process joyful. On the other hand, there were the “speak English, this is America” teachers who were insensitive and made negative comments about Puerto Ricans. However, in the 70s, as a teacher myself, I did see changes coming (as an outgrowth of the Black Power movement in the 60s) with bilingual education programs that incorporated culturally relevant curriculum and literature. It was a revolutionary time – history in the making -- which included the Nuyorican Poetry movement. I was privileged and thrilled to see it happening up close when I met Pedro Pietri – beloved poet of the community – and through him other poets, such as Sandra Maria Esteves, Bimbo Rivas, Miguel Piñero and Miguel Algarín, who started the Nuyorican Poets Café. I lived with Pedro Pietri’s brother, Joe, for 10 years so I was an integral part of the Pietri clan and so was inspired to write the two pieces about him in my book, Whose Place.