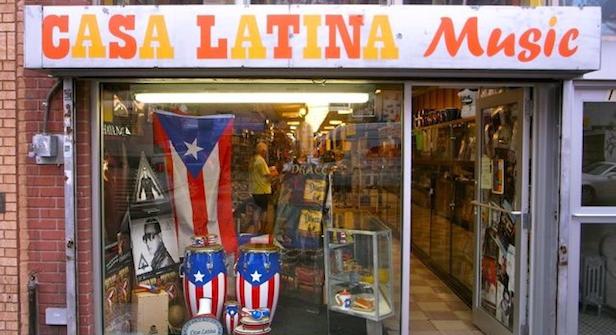 Of the people who had the opportunity to make Puerto Rican popular music in New York widely known and readily available to the public, very few did so in a way as encompassing and devoutly as Bartolo Álvarez. As a musician, orchestra director, record seller and distributor he was without a doubt one of its greatest promoters. In 1928 this Yaucano arrived at the old community of El Barrio to reside with his sister in an apartment located on Lenox Avenue and 119th Street. Bartolo Álvarez was fourteen years old at that time, a young man full of vitality and ideas for the future.

After completing high school he decided to study music. In the early thirties he began to take courses in theory and alto saxophone, and between classes he worked as a clerk in a grocery store near the Victoria Hernández record shop. Once equipped with the fundamental knowledge of the instrumentalist, he joined a band named “The Melody Boys”. This group enlivened parties in the apartments and the clubs of the community, and their repertoire included numbers popularized by Casino de la Playa and Conjunto Caney. Musicians such as Joe Loco (piano) and Vázquez "Vaguito" (trumpet) played with the group. Bartolo directed, played the saxophone and made the musical arrangements.

Afterwards, Bartolo joined the Juan Bayron Orchestra. From 1938 to 1940 he played with “Lin and his Boys”, and the following year he went with his wife Lucy Álvarez, also from Yauco, Puerto Rico to live on the island for six months. After returning to New York, he organized his own orchestra with Charlie Palmieri on the piano, working for nearly two years at the Rhumba Palace on Lenox. Some of the afternoon presentations at this club were transmitted live through the radio.

In 1943 he was called to serve in the United States Army as a gunner in Company 112, based in Fort Bragg, North Carolina. There he had the opportunity to play with the Army band. After receiving the honorable discharge, he returned to New York and became part of the Ramiro Medina Orchestra until 1946, reuniting with Charlie Palmieri again in that group. It was two years of steady work at the “Broadway Casino”.  He later collaborated with the orchestra of Ney Rivera, and continued directing his own orchestra until 1949.

During the summer of that year, Bartolo decided to take a short break from the club circuit. One morning, while drinking a beer at a place near 110th Street and Park Avenue, Bartolo watched a record store located across the street. Ney Rivera had informed him that the business was on sale. The shop was strategically located but not many customers frequented the store. The next day Bartolo bought the key to the business and the era of “Casa Latina” had begun.

Without delay, Bartolo began to supply the store with the most popular records of the moment: Daniel Santos, Davilita, Trio San Juan, and many others. In addition, he sold and repaired radios. His employee in that department was José A. Ramos "Radio Man", who subsequently became another "player" in the Puerto Rican popular music record business, when he purchased the catalog of the Verne Recording Corporation from its founder Luis Cuevas. Another one of Bartolo’s employees was a young man named Miguel Angel Amadeo, who later became a renowned composer, musician and record store owner.

Casa Latina turned into a regular meeting place for the musicians. The store was visited frequently by recording artists such as Pedro Ortíz Dávila “Davilita”, Charlie Figueroa, Carlos Pizarro, Iván Rodríguez, Chago Alvarado, Ola Martínez, Daniel Santos, Yomo Toro and many others. Sometimes Bartolo would act as an unofficial agent for the artists, as he often received calls from club owners or individuals looking for musicians and groups. In doing so he would earn commissions or tips in an informal manner. People of that era who frequented the Casa Latina record shop stated that the ambiance in the store was great, and that they missed those unforgettable and joyful moments lived in frank camaraderie. There they hung out, made jokes, talked about issues related to music, and left the place late at night.

In the fifties, Bartolo ventured into the record producing bussiness and founded the Rival Record Company. Among those who recorded for Rival were Mario Hernández, “Davilita”, Cheito González and his Trio Santurce, Paquitín Soto and Los Murcianos, Julita Ross, Claudio Ferrer, and several typical music ensembles. The recordings were made at the Nola, Fox and Master Tone studios located in downtown Manhattan.

As the business progressed, Bartolo expanded his sphere of influence. He started buying wholesale from record companies such as RCA Victor, Seeco, Decca, Columbia, and Verne. He then sold them to several businesses in El Barrio and the city, and to record stores located in Brooklyn and the Bronx. He also distributed records to Puerto Rico and to the states of Philadelphia, New Jersey, Illinois and California. At one time he even had a Casa Latina sponsored radio program, broadcasted on WHOM every Friday from 12 noon to 12:15, where the hits of the moment were played.

In 1962 Bartolo purchased the building in 116th Street where Casa Latina is currently located. There he continued the business with the same dynamism and ambiance as before.  After twenty years at the head of Casa Latina, however, Bartolo Álvarez sold the business to Alfonso Rubio. Mr. Rubio was the father-in-law of Vicente Barreiro, current owner of Casa Latina.

Bartolo Álvarez was a Puerto Rican pionero who revolutionized the Puerto Rican popular music record sales industry in New York. His contribution to the production and proliferation of the genre was vigorous, far reaching and admirable. After retiring from the record business, Bartolo relocated with his family to the state of Florida. He passed away on March 24th of this year at the age of 102. His unparalleled legacy, however, continues to live on.