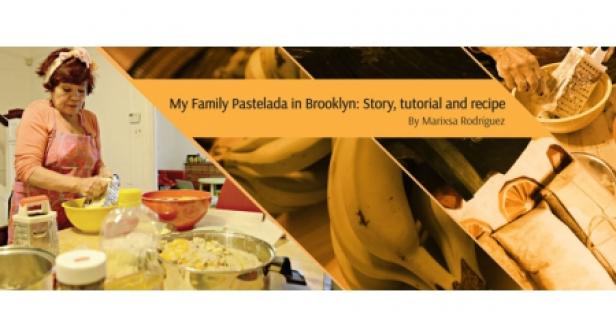 Winter is a challenging time for this Boricua living in New York. The harsh weather keep me indoors and dreaming about warm, comfort food. It also makes me want to have friends and family close. So when Christmas time comes, I know I’ll have the perfect excuse to gather the family together, eat and celebrate. Because no matter how cold it gets outside, the family will get together. And nothing brings family together better than pasteles. Making pasteles is a family event on its own, one that gathers the family matrons, the cousins and the kids. Everybody has a job to do in the process of making pasteles. From buying the nicest piece of pernil and finding the best calabaza and the prettiest yautía; to taking part in the assembly line, filling la masa, wrapping and tying pasteles… I was able this year to extract a recipe from my aunt titi Julia, and some ultra- secret tips from my aunt titi Doris. They make the best pasteles in my family (at least on this side of the Atlantic.) They agreed to come to my house in Brooklyn on a Saturday morning to teach me how to make pasteles, right before the start of the Holiday season. Watch the video to learn all about their recipe, the procedure, tips and secrets and about the tradition of making pasteles in my family.

While my tías had way too many secrets for making pasteles I was able to determine many intricate details of the fine art of pasteles making, with the help from my cousin Cathy who came all the way from Maryland to help, inquire and take pictures. I discovered our recipe was not inherited from my grandmother, but my aunt learned it from her mother in-law. Nevertheless it was exciting and satisfying learning to make them, sharing the family moments and tasting the awesome pasteles we made. As part of the conversation, many questions arise like where pasteles come from, how many variations there are and why they are so entwined with our holiday celebrations and with bringing the family together. 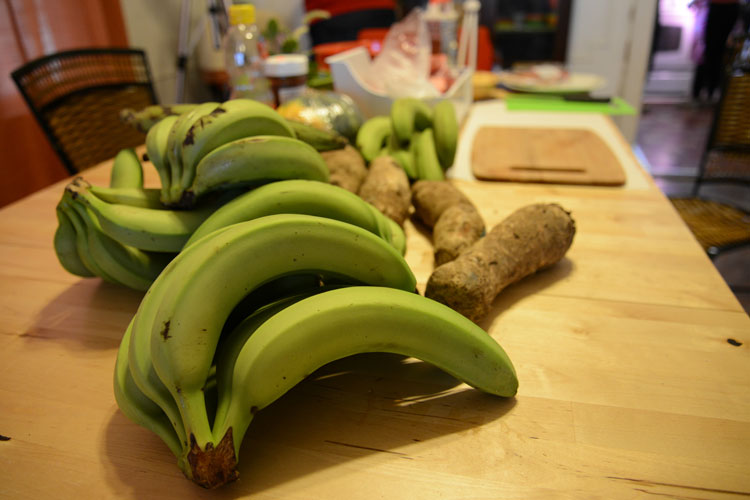 So I asked Dr. Melissa Fuster, a food policy scholar, about this. She is also Boricua and an avid pasteles consumer, although she eats hers with ketchup…

Marixsa Rodríguez: Did we inherit pasteles directly from a cultural group or region, or was it adapted from several culinary traditions?
Melissa Fuster: Relying on the work of historian Prof. Cruz Miguel Ortiz Cuadra [his book, Eating Puerto Rico: A History of Food, Culture and Indentity was reviewed in Centro Voices], my understanding is that the pastel, like many of our dishes, is the result of several traditions brought together. Yet, given the ingredients and cooking procedures, it does seem to have a strong African influence.
MR: Are there variations of pasteles recipes, ingredients or preparation procedures among families according to regions on the island or the mainland?
MF: There are many variations for pasteles! The masa itself has different iterations, from using just yucca, to mixing different viandas. There are even rice pasteles. Some people add plátanos, others leave them out. There is even more variation in the filling. We have pasteles made out of pork, chicken and bacalao. Some add raisins, others garbanzo beans. How this varies by region is beyond the scope of my expertise. I know that taste is a big factor is these variations and that people feel strongly about what should go into a pastel. Given these variations, there is no "true" recipe for a pastel. Recipes vary by family, and continue to evolve to this day, depending on changes in taste, resources and even health concerns. For instance, while in the beginning pasteles were wrapped in hoja [banana leaf], when the hoja was scarce, parchment paper or even aluminum foil may come to be used. Another change is the vegetarian (perhaps a pastel ciego) or pescatarian pasteles (for example bacalao filling,) for those who do not eat meat (pork or chicken.) Regarding health, the main change, even seen in the iconic cookbook Cocina Criolla [by Carmen Aboy de Valldejuli, first published in 1954], is using vegetable oil instead of lard, or even consciously looking for lean cuts of meat for the filling (even if more expensive).
MR: Is there a record of the time when pasteles stopped being imported from the island to the states and people started making them on the mainland? When did ingredients become more easily accessible in markets on the mainland?
MF: My sense is that there was a movement of ingredients from the island to the States, just as we have today. I would think that in the beginning people had to improvise (for example, not using hoja,) or depend on those coming from the island for the ingredients. As our population grew, the market responded. At the same time, some of these ingredients—for example, the hoja—are available through Asian markets, denoting the global roots of our cuisine and highlighting the interplay of different diasporas through similarities in cuisines.
MR: Can you describe a balanced and healthy plate that includes a pastel?
MF: Granted, the viandas are high in starch, and the meat, especially if not using lean cuts, can increase the intake of saturated fat. Still, the core ingredients of the pastel and the cooking method, I argue is healthy, especially with the modern modification of using vegetable achiote oil instead of lard. This is important, especially as traditional diets are often and sadly seen as unhealthy. In the end, the healthiness of a pastel meal depends on what else you eat with the pastel (and how many you eat in one sitting!). Thinking of the traditional Christmas plate, the pastel sits on the side, along with a mountain of arroz con gandules and pernil (with the crispy cuerito of course!). This plate can be modified to smaller portions of rice and pork, thinking that the pastel itself already contains the combination of starch and meat. Ultimately, the pastel is a complete meal; even healthier if eaten alongside a colorful salad. These small modifications or compromises allow for the enjoyment of these foods and remembering of the existing healthy aspects of our diets.
MR: What’s in a pastel (beyond what is physically in it)? Why are they so powerful uniting, celebrating and inspiring families?
MF: I think the main "ingredients" in the pastel are time, love and dedication. It is a dish that takes hours to make, from the peeling of the ingredients for the masa to the hour they take to cook. Going into the preparation, it is a family affair too! When people talk about memories in the kitchen, in casa de abuela, they often may recall when pasteles were made—the family assembly line. Despite that many of us are not making pasteles with the family today; eating them is still a special occasion. In Puerto Rico, growing up in the city, my family usually bought pasteles, instilling "arguments" as to who could find the best pasteles. Once they reached the table, after waiting that hour for cooking, it was a special moment. Just the way they are presented—the ceremony of opening the string and unwrapping them (like a gift), smelling the masa and the meat, as the steam escapes the pastel—all of this makes eating them a special occasion. If you see the way they are packaged—a junta—they are meant to be shared with at least another person. The pastel is a dish deeply tied with how we define Puerto Rican food (even though Dominicans have their own version). This symbolism makes it even more special when you are away from "home," and the closest they are to  Puerto Rico, the better they are. This is why many of us travel with a dozen of pasteles in our carry-ons coming back from Puerto Rico, and preserve them frozen in our refrigerators for special occasions. Despite the availability of pasteles here, I have witnessed cases that those brought over from la isla are seen as better! Even if we can find amazing pasteles here in the United States, prepared with almost the same ingredients. This goes to the value of food in our memories and nostalgia, an important value for our happiness and wellbeing. 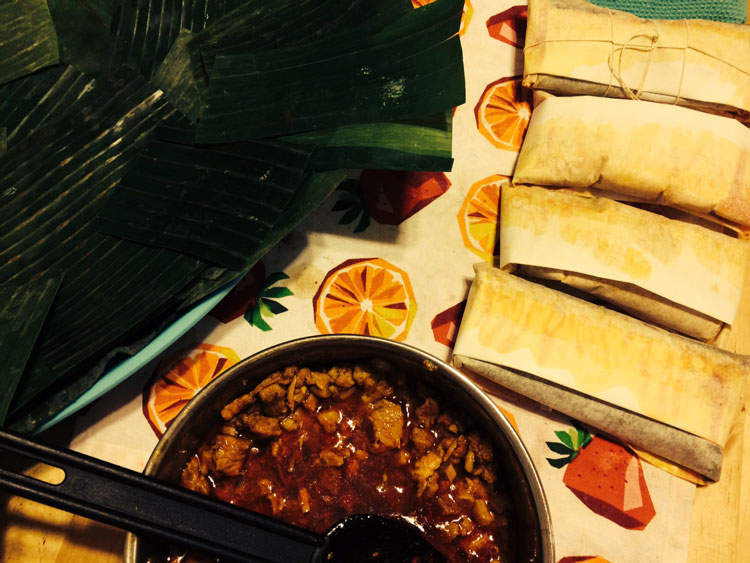 Lastly, since I know you want to make your own pasteles, I have included our family recipe for you to try at home. Although I cannot share my tías’ crafty hands and experienced ability with you, I’m sure you’ll be able to recruit a collective of pasteles lovers to take on the festive (although arduous) task of the pastelada. Let’s keep the pasteles making tradition going anywhere you are, and you may feel closer to home, wherever home is.

1. Peel pernil skin, separate bone (or ask butcher to do it for you).
2. Boil skin and bone on large saucepan with enough water to cover the bone. Save stock for later.
3. Clean pernil cutting off excess fat. Cut pernil in ½ inch cubes. Cut ham in ½ inch cubes.
4. Cook cubed pernil and ham on ¼ cup of the stock saved. The meet will release its own juices. Boil for 20 min. (while following steps 5 and 6)
5. Make achiote oil by heating 2 cups of corn oil with achiote seeds in a small saucepan over medium heat just until the seeds begin a steady bubble. Then remove the saucepan from the heat and let stand for a minute. Strain the oil.
6. Add ¾ cup of strained achiote oil to the meat. Save the rest of the achiote oil for later.
7. Add 2 roasted peppers cut in small pieces, sofrito, sazón, tomato sauce, tomato paste, olives and salt to the boiling meat. Cover. Boil for 30 min or until meat is well cooked and soft.
8. Grate green bananas, yautías, potatoes, green plantains and squash to make the masa. Use the finer part of grater. Use helping hands here! Mix on a big bowl and stir with wooden spoon.
9. Add to the masa 2 cans of evaporated milk and equal amount of stock (saved from boiling the skin and bone). Add ½ cup achiote oil to the masa. Add salt to taste. Stir with wooden spoon.
10. Prepare assembly line: cover big table with oil cloth or paper, bring the remaining achiote oil, the masa bowl, the meat pot and 4 roasted peppers cut in strips.
11. Wash and sterilize banana leaves passing each banana leaf piece over stove open flame on both sides for 3 seconds each leaf, each side.
12. Arrange wrapping materials: pre-cut parchment paper (50-12” x 18” pieces), pre-cut banana leaves (50-7” x 7” pieces) and pre-cut twine (50-1 yard pieces) near assembly table.
13. Assemble 50 pasteles:
A. Place 1 parchment paper, then 1 banana leaf centered on paper
B. Add 1 tsp. achiote oil and distribute over banana leaf, including edges
C. Pour 1 cooking spoon of masa (equivalent to 5 Tbsp.) on banana leaf,
spread masa inside banana leaf
D. Add 1 Tbsp. meat
E. Add a strip of roasted pepper
F. Fold parchment paper in half, fold again over, push content to fold sides over (see video)
G. Tie pasteles with twine (see video)
14. Boil for 1 hour. Untie, unwrap and enjoy.
15. Keep un-boiled pasteles in freezer until ready to boil and enjoy.

Special thanks to Cathleen Lugo for the photographs.
© Center for Puerto Rican Studies. Published on 3 December 2014.