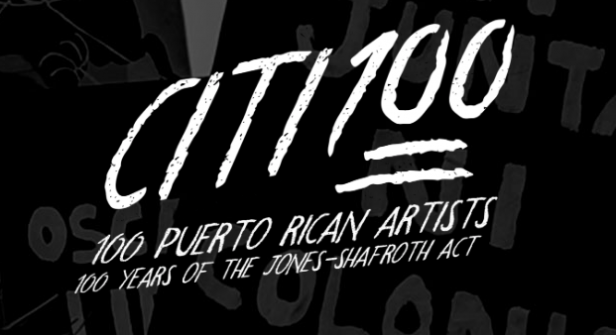 In early March, Defend PR, a multimedia arts collective, inaugurated a new traveling art exhibition called CitiCien at the Clemente Soto Vélez Cultural & Educational Center in New York City, to bring awareness and explore themes related to the 100th anniversary of the passing of the Jones Act of 1917. One hundred Puerto Rican artists contributed artwork to the exhibit, each in their own way interpreting the US-Puerto Rico relationship. We interviewed Adrián Viajero Román, curator of CitiCien, to learn more about the exhibition.

How and when did the concept behind the CitiCien exhibition come together?

We at Defend Puerto Rico are always seeking new ways to fulfill its mission: to document and celebrate Puerto Rican creativity, resilience, and resistance, deepening connections between Puerto Ricans on the island and throughout the diaspora, in the hopes of nurturing greater solidarity, collaboration, and kinship.

In December of 2016 I was doing research about historical dates in Puerto Rican history for my own personal art related project, when I came across the Jones Shafroth Act of 1917. Realizing March 2nd of 2017 would be the 100 year anniversary, I was compelled to put an exhibit together under Defend Puerto Rico. I began going through my personal network of friends and family of Puerto Rican artists and ask if they were interested in creating new work for this exhibit. Knowing the timeline was short, I created strict visual guidelines of 12in x 12in size and a black-and-white only palette. I wanted the exhibit to have visual consistency and commitment, acting as a metaphor of the unified voice and solidarity of Puerto Ricans during this critical political time.

After receiving 60+ artists from my personal network agreeing to participate, we posted an Open Call for Artists on the Defend Puerto Rico Facebook and Instagram pages. With over 8,000 followers on both pages, I selected the remaining 40 artists out of the submissions we received.

What were some of the motivations and challenges of putting together the exhibit?

One of the main motivations to make this exhibit a reality was the opportunity to bring together a wide range of artists that may not have exhibited together at the same time or at all. I was excited to see the new artwork the artists would be creating within the theme and guidelines because many of the artists use color and scale as part of their usual artistic expression and practice.

One of the challenges I faced was not yet having a venue for the exhibit while already receiving art submissions. It was difficult to find a venue in such short notice, but I was also rejected by some venues because their fear or associating themselves with any messages of resistance within the conversation of citizenship.

What does it mean to bring together artists from different generations? Do you notice any trends or particularities to the younger versus older generations? A dialogue of sorts?

I think when having a platform to speak about a topic such as this one is extremely important to have a multi-generational group. I believe the major issues in Puerto Rico involving politics, economy, and even identity (and more) are because of the United States and the colonial status of Puerto Rico. It’s recorded history, there’s no denying the abuse the United states has inflicted on the Puerto Rican people and the island. So having a multi-generational group shouldn’t be something unique, it should be the norm. These struggles and oppressions are not bias, they are transcendent and have affected everyone in some way or another. The CitiCien artists are male, female, LGBTQ, older generation, younger generation, professors, students … etc, is an example of the unity that is needed in these times of crisis. The artists that are a part of this group have created art that is so prolific, I see the connections and parallels between them.

What has been the response to the exhibition so far?

The response has been more than I expected. Maybe it’s because I’ve been on overdrive working on the making it happen that I didn’t have time to really step back and imagine what the end result could be. We had over 300+ supporters come to the opening reception at the Clemente Soto Velez Art and Educational Center. We went from finding it very difficult to find a space to host the exhibit, to receiving emails from galleries, museums, and cultural centers across the U.S. and Puerto Rico that want to host the exhibit. We’ve had some great media coverage from NBC Latino, NPR, and PBS NewsHour as well.

Where will the exhibition be traveling next and why is it important to bring this artwork to other Puerto Rican communities around the country and the island?

The exhibit will be traveling to Puerto Rico in the summer, hopefully in June during the plebiscite vote for either statehood or independence.

Taking the exhibit to other Puerto Rican communities around the U.S. and the island allows us to share information and history with our communities first. We share new ways to document and tell our stories with our communities that may not have access to new technologies like Augmented Reality and 360 video technology. This allows our exhibit to act as an educational tool that includes art, culture, history, current events, and technology. We want to empower our network and communities to be in control of telling our stories and build a greater community between Puerto Ricans of the diaspora and on the island.

Is Defend PR working on anything in particular as far as its future plans are concerned?

To learn more about the CitiCien exhibition and to see the full list of participating artists, click here.