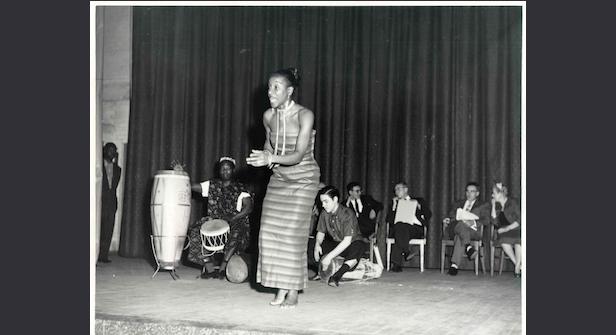 Editor's Note: Sylvia del Villard (1928-1990) was a celebrated Afro-Puerto Rican activist, dancer, choreographer, actress, and declamadora, that the Fundación Nacional para la Cultura Popular describes as "one of the greatest spokespersons for Afro-Puerto Rican culture." In 2015, del Villard was posthumously honored by the National Puerto Rican Day Parade [see video below]. In the following essay, Juan A. Moreno-Velázquez​ pays tribute to his beloved aunt, recalling everything from childhood memories to her final moments in Puerto Rico.

To read a short biography of del Villard, [click here].

How the years go by. This past February marked the twenty-eighth year since Doña Sylvia del Villard left our earthly plane.

Honestly, it seems like yesterday, and I say this with certainty given that I was with Sylvia, practically each day, during the final months of her life, when, on a constant and daily basis, an aggressive lung cancer would drain the energy of a vibrant character that I have always remembered as my aunt, although recognizing at the same time that she belonged to the people of Puerto Rico, to all Latinos, to all African peoples of the world, and finally, to all those who, in one way or another, enjoyed her talent, and understood her message, artistic and cultural, political and spiritual, that marked the steps of her path.

The daughter of Marcolina and Agustín emanated Antillean negritude, and her upright character demonstrated a proud understanding of her legacy. And this is what separated her from the rest as a necessary and consistent example of our cultural heritage.

Over the years, Sylvia was raised by my great-aunt, Doña Paula Moreno Herrera, sister of my grandfather Justo and mother-like figure to Sylvia, and with whom my beloved and admired aunt went to spend her final days on the island of Puerto Rico, after having been diagnosed with lung cancer.

I have so many memories of Sylvia, many of which date back to my early childhood, where she would always show her affection toward my father’s oldest child, and where a relationship that touched the deepest part of my being during the most important moments of my life was forged.

It was with her that I learned to read and to enjoy the writings of the poet and Guayama-native Don Luis Palés Matos, the greatest exponent of our poetic negritude, born in 1898. She also led me to the work of Don Luis Llorens Torres and Don Virgilio Dávila, among others. In her own way, she taught me to look after my cultural legacy in terms of understanding what it meant to hacer patria.

Sylvia lived between New York and Puerto Rico during the majority of my adolescence. Her consistent performances and tours throughout the island allowed me to appreciate her art and her talent, in addition to her dignity.

I remember in the middle of my teenage years when, without being of age, I went into Ocho Puertas, where my aunt’s performances would blow me away. Some would receive resounding approval from the audience and in the process, would demonstrate her profound understanding of the Black Majesty that lived in her and in all Puerto Ricans. In an age where some would say that the younger members of the family should get together with the lighter-skinned, as if in the Caribbean there were truly whites, in order to “mejorar la raza,” Sylvia proudly upheld her standard of blackness against them all.

That made her different, not only within my family, but in comparison to everyone else within the limited scope of my adolescent environment. But as the years passed, as I got older and more experienced, I came to the realization that Sylvia del Villard-Moreno was a unique person, and that she was one of a kind.

I had a lot of opportunities to share what were truly important moments for me during the early stages of my spiritual anxiety and my first encounters with creative doubt, which were topics that only Sylvia could provide me with direction, since she gone down that path. And whether near or far, she always made herself available.

Although she was a regal woman, with the true character of a queen, Sylvia was very sensitive and noble within her personal character. She always had a smile on her lips, and within the trademark seriousness that characterized her image, there was always room for a conversation on art, politics, or spirituality—in which her opinions were always spot-on.

Near the end, Sylvia decided to return to her beloved sol boricua, to spend what she knew were her last days in the warmth of titi Paulita’s home. It was during that time where I was able to renew my special connection with Sylvia, one that had been fostered during my time as a student in New York City.

Sylvia never gave in; between my daily visits and my trips to her medical appointments throughout this difficult period that involved the fight against an illness such as cancer, she always showed that singular pride that characterized her so well, a pride, of course, that always complimented her great spirituality and unique humility.

Our conversations continued to increase in frequency and scope, with Sylvia sharing many of her concerns with me in regards to politics, society, culture, our blackness---a blackness that was truly pure within the context of her being—and above all, spirituality. In all of these subjects, we always found a place of spiritual repose within an oasis of our shared ideas, our common ground. All that while her body and her vitality were wasting away before the threat of her illness, one that eventually broke her body, but that could never dampen her spirit.

Afterwards, the moment came and again, my father asked me to say goodbye on behalf of our grieving family. In the cemetery in Santurce, in Villa Palmeras, before a grand audience replete with black faces, heads held high throughout, I offered closure, remembering my aunt, and sharing, as she would always ask me, a speech.

It was magnificent to see the recognition from the people, first at the Instituto de Cultura, where her work was recognized by politicians, artists, and mainly, by the people that—between dancing, bombas and plenas—remembered her legacy, in singular magnitude, through a baquiné to a true black angel, Doña Sylvia del Villard-Moreno.

At the end of the whole thing, I remember the Governor of Puerto Rico, Don Rafael Hernández Colón, visiting the home of titi Paulita, on Manuel Corchado Street in Santurce, during a special moment of remembrance and final tribute to a hardworking, tireless boricua, that found in her art, a mechanism to lift the national pride of our people.

After twenty plus years, I am before you, recalling my aunt Sylvia, but I guarantee you that her example and her legacy have lived inside of me since her passing, because as the respected journalist and my friend Wilda Rodríguez said on my Facebook page last week, “Sylvia is unforgettable to those who knew her. To those who did not, we must introduce her to them. Sylvia lived her life protecting our African heritage and she did it with extraordinary passion. She was a Black Queen to those of us who had the privilege of paying her tribute.”

I always remember when she recited..."Danza Negra," by Palés Matos…

To read the rest of this poem [click here]

As an additional note, we recognize that Sylvia deserves to be remembered in Puerto Rico as an example of determination and constancy in what was a lifetime’s worth of work in support of our people. At the moment, her remains lay in a cemetery in Santurce, in Villa Palmeras, in the Pantheon of the Moreno Herrera family. Circumstances would have it that to date, there is no gravestone marking her place of eternal rest. This is something I propose to resolve in a future trip to Puerto Rico.

In the U.S., given her dedication to social work on behalf of the community, such as her work as a member of the program Ciudad Modelo de San Juan P.R. (1971) with disadvantaged communities like Tras Talleres, Buenos Aires, and La Perla, for example, a treatment program was named in her honor: The Sylvia del Villard Continuing Day Treatment Program” (Programa de Roberto Clemente Center - Gouverneur Hospital - New York). Additionally, in Chicago, as part of the “Segundo Ruiz Belvis Cultural Center, a conference room was dedicated in her name, the “Sylvia del Villard Hall.”

It’s a shame that her work in the arts still hasn’t received the recognition it deserves in her native Puerto Rico, while second and third-rate politicians are constantly being immortalized.

And in order to remember Sylvia, along with her favorite poet, Don Luis Palés Matos, I leave you with what is his most widely known and shared work, “Majestad Negra.”

To read the rest of the poem, [click here].

Juan A. Moreno Velázquez is an award-winning author and journalist born in Río Piedras, Puerto Rico and based in New York City. He is the author of Desmitificación de una diva, la verdad sobre La Lupe; La Rumba es la Reina, por siempre Celia; Pacheco, Tres de Café, and Maelo; Hijo de Borikén, Rey de los Soneros; in addition to documentaries on Machito, Tito Puente, and Celia Cruz, and the script for “A Fall to Grace.” Currently, he is an Associate Professor at Boricua College and works as a legal consultant.

© Juan A. Moreno-Velázquez. Published by permission in Centro Voices 28 Febuary 2018.