Home » Centrovoices » Arts Culture » So You Think You Can Craft?

So You Think You Can Craft? 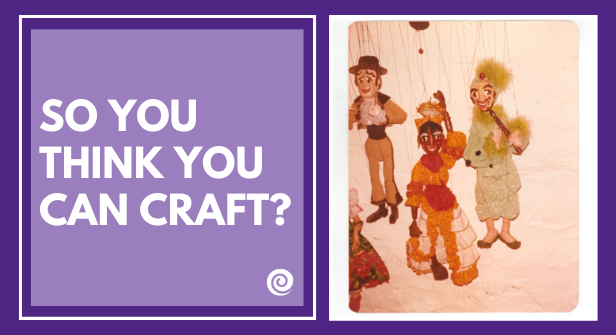 In light of several plights affecting our communities, not only on the mainland or the island - political and natural disasters, I’m looking at you - but now also globally with the pandemic, there’s been a lot of uncertainty, losses and also a whole lot of encores of seguimos pa’lante. With most of the population being under a shelter in place, boredom, frustration, and perhaps, for many, la soledad has been a frequent visitor. There has been a flood of tutorials or clips on how to better manage your time–claro, or articles that bullet point all crucial things you should avoid while in crisis–seguro. We’ve been hearing it so much, it's practically the middle point where we come to as we oscillate between pushing through and allowing ourselves to acknowledge the very real and scary reality that no longer is reserved for sci-fi horror films. As it is often done during times of turmoil, some tend to look to the past for strength and answers, while like many, just take it in stride, and find a way to mend the different, yet essential parts of themselves to a greater whole, much like a slamming sancocho!

Did you know that some of the most influential Puertorriqueñxs, that contributed immensely to nuestra cultura as we know it today, were also crafters?

Before Pura Belpre was able to procure the literary accessibility we all benefit from today. Like many migrating Puerto Rican women to La Gran Manzana, her first job was in none other than in the garment industry despite having been highly-educated. This humble beginning would eventually merge with Pura writing and become the beautifully narrated folkloric tale of Perez Y Martina, with the assistance of titeres. Bringing together all her acquired skillsets, her love for literature and dedication for accessible knowledge and literature, allowed generations to experience magical forms of story-telling that have remained with us ever since.

Ever wonder about how the iconic Lareña flag came to be? Pues, sabía usted Mariana Bracetti (Brazo de Oro) merged her knack for knitting and her commitment to the island’s independence to create the iconic bandera. The revolutionary flag was designed and knitted by Mariana - aided by Dr. Ramón Emerterio Betances’ suggestions. Who knew how revolutionary agujas and hilo could be?

Don’t you just love when the festivals just roll in? La comida, la gente, la música. Let's not forget the festivities, especially the tall creatures that look like they popped out of a scary bedtime cuento, known as los vejigantes. Said to have originated in medieval Spain during the Reconquista, the vejigante stands as a proxy for the Moors’ resistance against San Jaime and is reminiscent of the battle entre la buena y la mala. The tradición of the prank inducing fiend carries heavy influences from Taíno and African roots. The style from Loiza is distinct from the mode in Ponce, partially due to the materials used, which are coconut shells and paper-mâche, respectively. Annually, people gather para disfrutar durante los festivales, and in some aspect give homenaje to their antepasados.

While everyone is impacted by these catastrophic events, our history has taught us these few arts and crafts are much more than just ways to past the time or release tension. They have made significant changes in communities, education, and our overall interactions with the world. Endurance is an inherited trait to our communities, as well as innovation. Each one of us can make history happen if we all do something collectively, and anyone of us can be the next to follow in the footsteps of our predecessors. Entonces, are you a crafter?

The 2020 holiday season is like no other we have ever experienced. This year has been a...
Puerto Rican Superheroes You Need To Know

In this day and age, we’ve seen superheroes of all different kinds of backgrounds...