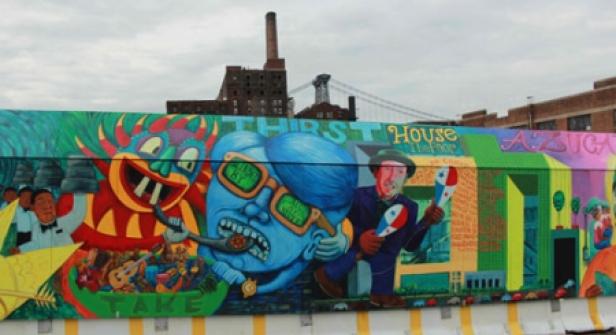 Steps away from the East River on the south side of Brooklyn, one can walk through a small field surrounded by sugar cane shrubs with the trapiche and relish the tempting roasted-coffee aroma. One can also spot some bright amapolas, plátano clusters and even enjoy the festive sound of coquies at night.

This little piece of Puerto Rico is… unfortunately, not a real garden. It is ¡Cultura con Azúcar!, a massive mural that pays tribute to the Latino, mostly Puerto Rican, history and diverse culture in the neighborhood, which keep rapidly transforming.

This public artwork fills a construction fence with boricua flavor at the demolition site of the city’s historic architectural icon, the Domino Sugar Refining Plant. The visual homage is 200-feet wide and 14-feet high on a wood-panel wall at Grand Street and Kent Avenue in Brooklyn’s trendy Williamsburg, long known as Los Sures.

Many artists have used the neighborhood’s walls as a canvas to depict their rich culture. It was known as a Puerto Rican barrio made up of families proud of their roots, displaying the national flag in their windows and on their clothes, listening to salsa and playing domino.

For decades, this neighborhood was home to thousands of Puerto Ricans seeking the “American Dream,” but during the 60s and 80s the community struggled with unemployment, crime and drugs. The neighborhood does not look the same, according to numbers provided by a report from the Center for the Study of Brooklyn, the Puerto Rican population in Brooklyn’s Community District 1 (East Williamsburg, Greenpoint, North Side, and South Side Williamsburg) decreased from 12.1% in 2000 to 10.2% in 2009.

In 2005, the borough began a large-scale rezoning project of a 175-block area, approved by Mayor Bloomberg and the City Council claiming it would revamp the neighborhood’s weak economy and create jobs. Since then, according to a report by city Comptroller Scott Stringer, rents have increased by 77 percent in the borough.

The mural represents a brushstroke of a whole series of efforts to create awareness of these drastic urban changes and to highlight the Puerto Rican and Latino histories of the community.

“This opportunity is really important to a neighborhood that is undergoing gentrification. This community came from being majority Latino to being majority white community from one census [2000] to the most current one [2010], so there is a rich history”, said Joe Matunis, founder of the artist collective Los Muralistas de El Puente.

The mural was directed by Matunis and painted by the muralists Rolando Almonte and Anna O’Keefe with a group of 12 students from the community-based high school El Puente Academy, many of whom are of Puerto Rican, Latino and African-American background.

The project is part of the activities of the human rights and youth development institution El Puente, established in 1982 by Luis Garden Acosta and his wife Frances Lucerna. Garden Acosta is a national human rights activist and former member of the Young Lords. He is also part of the Center for Puerto Rican Studies' 100 Puerto Ricans, and has pledged to donate his papers to Centro's Archives. Lucerna is an outstanding community leader and executive director of El Puente Academy. The institution has a long-standing record of positive change through cultural, artistic and environmental activities in the borough.

The mural depicts a beauty salon along where women are sitting with curlers on hair dryers chairs. The display is so colorful people have confused one of the women with "la reina de la salsa" Celia Cruz.

Of course, there is also a giant colorful vejigante, a folkloric masked and playful character from the Puerto Rican Fiestas de Santiago in Loíza that is opening a water pump where children refresh and play while the families chat: a typical summer scene in the barrio. A line of banquet waiters connects the labor histories of Puerto Ricans and Latinos in New York. These were the jobs that Puerto Ricans filled in the 1950s and 1960s, which are now filled by other Latinos. 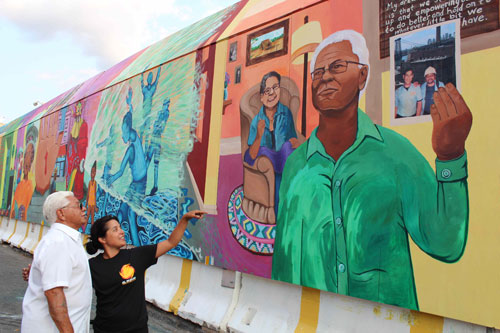 If you have a good ear you can listen to the contagious pucutá-pucutá of the tambores and panderos that push people to dance at the pace of la bomba y la plena. On one side, an African woman waves her white and red dress and in other there is a man drumming the barriles.

The mural created such a buzz that it attracted people from all of New York’s boroughs. A Puerto Rican man from the neighborhood, who has never been to the island, brought his granddaughter to show her the sugar cane, the culture and the history of their ancestors.

There he engaged in a nostalgic conversation about their cultures and the jíbaro’s struggles with the Dominican muralist Almonte and both ended up crying and hugging.

“The shared culture of farming and sugar and cultural traditions sprouted so many memories... and it was really nice to see that and the generational thing,” Matunis said.

The sugar cane, along with a chained hand from an African slave, take us back to the shared history of slavery and exploitation in the Caribbean. It also references Brooklyn’s Puerto Rican and Latino workers of the Domino Sugar Factory, which became a symbolic last trapiche for the sugar coming from the Caribbean.

The place carries a deep symbolic meaning, not only for those who worked there but also for the community. The symbolism is especially potent since the Domino, which was once the largest sugar refinery in the world, will be demolished to construct a waterfront residential complex. The redevelopment project will bring 6,116 residents into luxury residencies—far from the typical housing of decades past.

The plan has been opposed by many community sectors claiming population density, environmental issues and the ongoing displacement of low to middle-class residents. A months-long political fight to reclaim public spaces and affordable housing has resulted in the company agreeing to provide some low and middle income units.

Taking into consideration the community’s opposition to the project, the company made the fence surrounding the site available for community art and contacted El Puente to develop a mural.

“When you are pushing away a historically Puerto Rican community, an African-American community, you lose all of that culture, all of those contributions, all the things that made the city or community at all”, added Matunis, who explained that there is an effort to imbue the area into the “Naturally Occuring Cultural Districts”.

One of the students involved, Sarah Oliveras, thinks the community is losing its identity, while becoming more “materialistic”.

She painted a part of the mural that depicts a blue man with glasses that reads “Blinded by all my stuff”, while he is fed with a “cultural spoon” by another vejigante.

Oliveras, the daughter of a Puerto Rican father and an African-American mother, would like to feel at home as in her grandmother’s place, where they used to listen to Marc Anthony and cook traditional family recipies which reminded all of the flavors of el campo.

“In my household, I am always the person that would be like ‘Oh, arroz con gandules, Puerto Rican, Dominican music,’ always trying to put back the culture back into my house, because I have a lot of African-Americans at my house so it’s very diverse”, said Oliveras.

The 16-year-old student was born and raised in New York, and she considers herself Puerto Rican. Oliveras’ section of the mural also includes yellow birds carrying arrows in their mouths that she says represent “things that are trying to kill our culture”.

“We had a lot of that culture so when whites were pushing us out, no offense; I felt our culture was dying... I thought we needed a revival in some way”, she said. For Matunis, the “birds are kind of a warning (that) if we don’t do something this community will disappear.”

Some of Oliveras’ inspiration came from materials Matunis provided to spark the students’ imaginations. For example, from a photograph of a man picking through garbage she developed the image of a Boricua man carrying the Puerto Rican flag on his back. 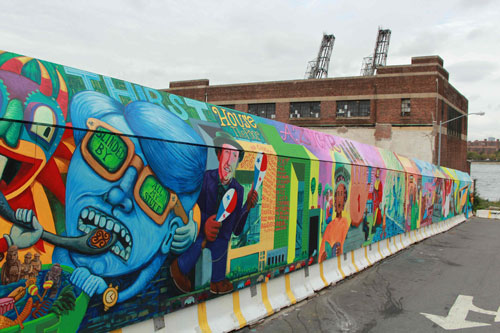 The flag is just one of several symbols that can be found in this massive artwork where also are typical musical instruments such as a cuatro, drums and an accordion. Gastronomy has a definite presence through corn, pasteles and a pilón, where the famous mofongo is blended. There are even Taíno petroglyphs and of course, an image of the Three Kings.

The 16-year-old artist from the project, Tayshawn Edmonds, sees it as if “they take culture out from the community, but they don’t give anything back.”

The design of the project was also based on several community interviews that El Puente Academy’s students have been doing over the course of four years for their senior history class project and their one month long Youth Summer program.

The goal was to “gather those oral stories” and transform them into a visual statement that reflects the community sentiment towards what Lucerna called a “critical time of transition.”

One of those stories was that of Sylvia and Miguel Hernández, a Puerto Rican couple that has lived in this community for the past 50 years. They were portrayed on the mural exactly how their home looks with traditional paintings and family portraits.

“We were raised here and have learned here... People think we weren’t here. Young white guys came and changed many things and they don’t know. We weren’t hiding, we have been here,” Sylvia said.

Sylvia, a plastic artist, explained that many Puerto Ricans have moved to other states and that they “are fewer, but still present.” Sylvia and Miguel want to remain in the neighborhood because of their ties to the community.

“My dream for Los Sures is that we start waking up and empowering ourselves to do better and hold on to whatever little bit we have,” reads Miguel’s pull quote on the mural. Privately, however, while admitting to some positive contributions of the changes taking place, he is also apprehensive:

“Over the last years, there has been fantastic growth … and people often see it as a drastic change, as if they want to eliminate everyone. It can feel like that, to be honest,” he said.

“House the Poor,” reads the mural over several luxury buildings where el mismo Rubén Blades is shaking Panamanian-flag maracas and singing his and Bronx-born Puerto Rican Willie Colón’s super-hit “Plástico,” from the album Siembra, the best selling salsa record of all time.

Blades’ lyric is written in red letters exactly over the site where the new luxury housing will be:

Matunis has lived in the community for 25 years and he is impressed by “how strong, how loving, and how supportive the Latino community is.”

According to him, the contribution of this public art is that it has “resonated” with the community in a “celebratory” way.

Sarah Oliveras was impressed by how many people came from all the city’s boroughs to see the mural and take pictures. She was fascinated by the story of a girl who visited the project everyday and ended up joining them.

“It became more and more a community thing. Like every day more people asked more questions about it”, Oliveras said.