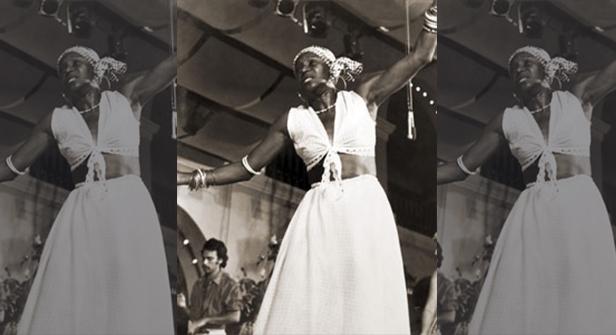 Editor's Note: The following biography appears on the website of the Fundación Nacional Para La Cultura Popular. To read the original version in Spanish, [click here].

The actress, dancer, singer, choreographer, and orator Sylvia del Villard Moreno, was one of the greatest spokespersons for Afro-Puerto Rican culture.

Sylvia completed her elementary and high school education in Santurce. Afterwards, she enrolled at Fisk University in Tennessee with a scholarship from the Puerto Rican Government, taking courses in social work and anthropology. Later, she finished her studies at the University of Puerto Rico.

This cangrejera’s passion for Africa was awakened while studying at the City College of New York, where she joined the dancing and singing troupe Africa House. This experience helped her to find her African roots in the Yoruba and Igbo tribes of Nigeria. Being in New York, she took advantage of her stay by studying with Sonya Rudenka and Leo Braun, the latter of which was the singing instructor and voice coach for the Metropolitan Opera Chorus.

Born on February 28, 1928 to Ponce-native Marcolina Guilbert and the Arecibo-native Agustín Villard, Sylvia began her professional career on the island in 1963, singing and reciting poetry at the nightclub Ocho Puertas in Old San Juan. From that moment, she devoted herself to the arts, dabbling in various different genres.

She worked on the big screen in the productions, “The Time We Lost” and “The Americans Came Playing the Violin.” She also acted in “Los traidores de San Ángel” by the famous Argentine Leopoldo Torres Nilson, which was filmed in Puerto Rico and was invited to the Cannes Film Festival in France.

She shined as a dancer and choreographer in the works, “Valley Without Echo,” “Witches of Salem,” “The Boyfriend,” “The Crucible,” and “Kwamina” in the United States. In Puerto Rico, she worked on “Afro-Boricua Ballet,” “Palesiana and Aquelarre,” “Palesianísima,” and various performances of African and Afro-Puerto Rican folkloric dancing.

In 1968, she founded the Teatro Afro-Boricua El Coquí company. The Pan-American Association for the Festival of the New World recognized them as the greatest exponents of Afro-Puerto Rican and Antillean culture, and offered them a contract to bring their artistic vision to several countries and perform at various North American universities.

The declamadora, who was a lover of the poetic works of Luis Palés Matos, brought his poetry from the Americas all the way to Africa. In honor of him, in the 70s, del Villard opened the Luis Palés Matos Theater, located on la Calle San Sebastian in Old San Juan. There, she presented a diverse range of artistic projects. After numerous problems with the neighbors, however, the theater closed its doors, leaving behind a void in the Afro-Boricua world and its most fervent admirers.

After the closing of her theater, Sylvia moved back to New York. There, she founded the Soninke company, which performed on many occasions at New York’s Museum of Natural History. In 1981, the Instituto de Cultura assigned her to be the first and only ever director of the office of Afro-Puerto Rican affairs.

Sylvia danced, sang, and recited until the day of her death on February 28, 1990. A victim of lung cancer, she had returned to Puerto Rico in 1989 to receive medical treatment. At the time of her passing, Sylvia del Villard was working on a cultural project called Puerto África.