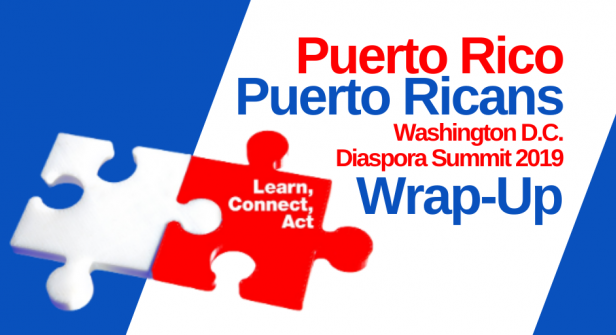 September 20th, 2019 marked two years since Hurricane Maria brought destruction upon the island of Puerto Rico. Since then, the island has seen a mass exodus of residents to the mainland United States, failures in its power grids, failures in receiving relief funds, deaths numbered in the thousands, and a political scandal resulting in the resignation of a governor and his team of elected officials. Rebuilding Puerto Rico will be a long and difficult process that must include multiple stakeholders from various levels of policymaking and implementation processes from a spectrum of civic sector actors including businesses, nonprofit organizations, and municipalities.

To mark the anniversary of Maria's impact, the Center for Puerto Rican Studies hosted a series of Puerto Rico, Puerto Rican conferences first starting off in New York City on September 20, 2019. The next summit occurred on October 12th, 2019 in New England in collaboration with Enlace de Familias, a grassroots non-profit organization that provides parenting programming and resources to help strengthen the community. To cap the series, the final summit occurred on November 16th, 2019 in Washington D.C. with the help of a number of sponsors. With the help of Friends of Puerto Rico, Cafe Ama, Puerto Rican Women's Council, the National Puerto Rican Agenda, and Tertulias por la Patria, a wide range of Puerto Rican community leaders active in the Washington D.C. area were invited to serve as panelists and moderators in the summit and speak on various topics related to troubles both Puerto Rico and the Diaspora are facing today.

Held at George Washington University's Elliott School of International Affairs at Washington D.C., the summit kicked off with an introduction by the Master of Ceremonies, Eduardo Conde - Founder of Tertulias por la Patria. Elizabeth Vaquera, Director of Cisneros Hispanic Leadership Institute of George Washington University followed with the opening remarks for the conference. Back-to-back plenary panels discussing the topics of "Building a New Puerto Rican Energy Future" and "Debt Crisis, Austerity, and PROMESA" took over the conversation, led by experts on the topics such as Director of Sustainability & Corporate Citizenship at TransUnion, Cristina M. Banahan and Margarita Varela Rosa, President and Executive Director of Projecto 85. From there, attendees were invited to lunch.

Journalist, television and radio personality, attorney, and political analyst Jay Fonseca took to the stage as the keynote speaker to touch on the current political situation of Puerto Rico  "Puerto Rico has three cliffs," Fonseca stated, "Pension, healthcare, and education. To fix corruption, we need to fix the entire system." After a third plenary panel talking about Puerto Rico's political scandal this past summer, attendees were invited to a series of concurrent panels on the topics of the National Puerto Rican Student Coalition, the current state of health within the Island, and the National Puerto Rican Agenda and local engagement. The summit officially closed out with Conde reminding all attendees of the events of the day, and participants were finally invited to a reception.