Home » Centrovoices » Barrios » Ahead of 2018 Loisaida Fest, A Tribute to the late Adela Fargas of Casa Adela

Ahead of 2018 Loisaida Fest, A Tribute to the late Adela Fargas of Casa Adela 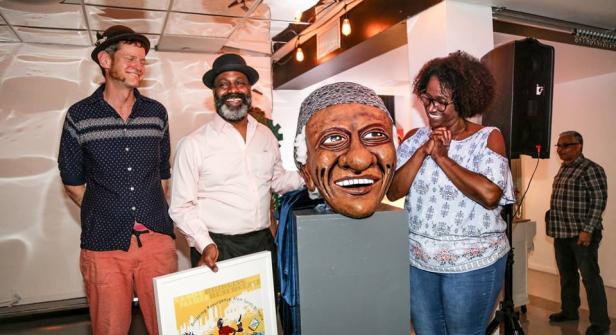 It’s hard to miss the cabezudos that line the hallway of the Loisaida Center once you pass through the entrance, giant papier-mâché versions of Loisaida icons Bimbo Rivas, Tato Laviera, Jorge Brandon, Armando Pérez and Carmen Pabón staring at you, waiting to come alive, harnessed atop the head of a lively surrogate. It is a tradition adopted from the Puerto Rican heritage of the neighborhood, an honor reserved for its most celebrated residents.

Each one can take about a week to make, according to master puppeteer Adam Ende. At least that’s how long it took for his latest creation: a cabezudo of the late Adela Fargas, beloved Loisaida icon and owner of famed Lower East Side establishment Casa Adela, who passed away in January of this year at the age of 81.

The cabezudo was unveiled during the opening reception of the VIVA! Loisaida Awards held at the Loisaida Center this past Wednesday, May 23. It is part of a series of commemorations that coincide with this year’s Loisaida Festival, an annual neighborhood celebration that has taken place on the Sunday before Memorial Day since 1987.  Adela’s two children, Luis and Abigail were in attendance that evening. They were there to accept an award on behalf of the Rivera-Fargas family, in honor of their commitment to carry on their mother’s legacy.

Other honorees included Dr. Manuel Moran, Founder and Artistic Director of Teatro SEA; Aixa O. Torres, President of the Alfred E. Smith Houses Residents Council; and Damaris Reyes, Executive Director of G.O.L.E.S. (Good Old Lower East Side). As a surprise, a representative from Rep. Nydia Velazquez’s office announced that the 2018 VIVA! Loisaida award-winners would be registered in the Congressional Record.

During the ceremony, there was also a sneak preview of a new documentary on the life of Adela. Filmmakers Gary Cruz and William Rosario of Yagrumo Productions spent four years working on the feature-length documentary, which covers her time in Puerto Rico as well as in the Lower East Side. Last One Standing premiered on Friday, May 25 at a special sold-out screening hosted by the Loisaida Center, with plans for additional screenings in June, due to popular demand.

Adela will again be honored on Sunday, May 27, when the 2018 VIVA! Loisaida honorees are recognized on the main stage of the Loisaida Festival. Down the road, as they have in the past, musicians will likely gather in front of the restaurant she managed for over 40 years to play. And with a cabezudo somewhere amid the crowd of thousands, Adela has been firmly established as a permanent fixture of the festival and the neighborhood she lovingly served.

The 31st Annual Loisaida Festival will take place on Sunday, May 27, from 11am to 5pm, rain or shine. For more information, visit www.loisaidafest.org

© Center for Puerto Rican Studies. Published in Centro Voices 26 May 2018.

From about the 1920s onwards, if you were among the thousands of Puerto Ricans who...
Loíza Festival in El Barrio Celebrates 50th Year Looking Ahead