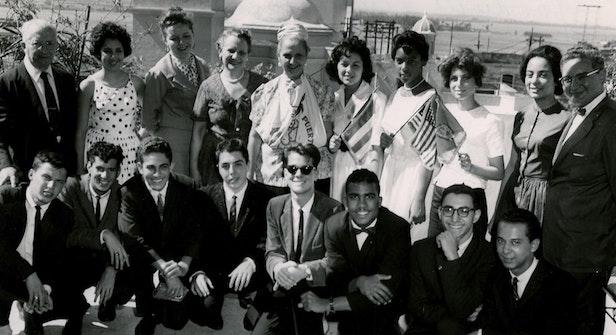 Over the last several years, my wife, Ivette Guzmán-Zavala, and I have conducted research on the history of Puerto Ricans, Mexicans, Dominicans and other Latinos in Central Pennsylvania. Earlier this year, we presented a public history and photography exhibit entitled Dutchirican: A Latino History of Central Pennsylvania at Lancaster Mennonite Historical Society and then at the Suzanne H. Arnold Gallery at Lebanon Valley College. This is the first exhibit of its kind in the region as these groups or their histories are not well understood.

Small-town life in the United States is an increasingly important aspect of the Puerto Rican experience. From 1960 to the present, almost half of Pennsylvania’s population growth has been Puerto Rican. Since the 1980s, most boricua arrivals to the state settled in small cities in the Pennsylvania Dutch Country—the region stretching from Allentown to York, named after the German or Deutsch who settled here. Most boricuas who left New York City were working class, and found in Pennsylvania affordable housing, a comparable job market, and more tranquility than in the NYC region.[1]

Until the 1970s, the vast majority of Puerto Ricans lived in Philadelphia; today about as many Puerto Ricans live in the Pennsylvania Dutch Country as the region surrounding the City of Brotherly Love. Pennsylvania has fourth largest Puerto Rican population in the continental United States and its history, particularly outside of Philly, has not been well documented.[2]

Boricuas’ history here could be justifiably narrated as one of conflict and isolation. The levels of residential segregation between what are often referred to as “Spanish” and white neighborhoods match, or even exceed, the segregation of African Americans.[3] As one woman from Lebanon put it “don’t tell me God doesn’t have a good sense of humor” putting Puerto Ricans with groups like the Pennsylvania Dutch.[4] The local cultures is notoriously clannish, quiet, and suspicious of outsiders. As Beatrice Ramirez, from Allentown observed: “The Anglos here, they don’t feel good being very close. Picture a Latino and an Anglo talking: the Latino is moving forward, and the Dutchman is moving backward.”[5] Yet we found other trends, largely hidden from newspaper accounts, of cultural exchange, intermarriage and accommodation. This contributes to the rise of what some in the area call Dutchiricans.

Dutchirican is an emic term that refers to Puerto Ricans with deep ties to the region and its mores. Pedro Cruz, a New-York born educator in Lebanon, Pennsylvania, first introduced us to the term. When he would return from Lebanon to see his cousins in New York, they would made fun of his strange accent. Eventually he realized that in terms of language and attitude, he had changed into something different than how he was raised. He was no longer Nuyorican, but Dutchirican.[6] Of course for many new arrivals, Central Pennsylvania is another way station on the road to a better life. That is why the subtitle of our exhibit is A Latino History; as we believe other histories and identities will emerge in time. But for some, like David Miller, a young minister who went to Liberty University, third generation, English-speaking, and “proudly Puerto Rican” loved how the term described his identity. At one level, David is a white conservative evangelical, a typical Dutchie; at another, he is Puerto Rican, or Dutchirican.[7]

We found that religion is an important dimension of the Dutchirican experience, and our exhibit highlights the close interactions between Mennonites and Puerto Ricans. No other group except their Anabaptist cousins, the Amish, could be considered more Pennsylvania Dutch than Mennonites.[8] During WWII, many American Mennonites completed their alternative military service in La Plata, in the Puerto Rico highlands. Over the coming years, hundreds of Mennonites returned to the Aibonito area to engage in medical and agricultural service and eventually to evangelize. Aibonito became the center of the island’s Mennonite community, some of whom later migrated to the Lancaster, Pennsylvania area.[9]

One noteworthy arrival to Lancaster was Don Jorge Gonzalez, who became the first Puerto Rican Mennonite pastor in Central Pennsylvania. He came to pursue religious studies, and supported his family by working at the chicken processing plant owned by a co-religionist. Gonzalez possessed tremendous faith and conservative values, and he embraced the “plain” mores of his Pennsylvania Dutch wife. In the chicken plant, Gonzalez advocated that his employer should open up better jobs to Puerto Ricans; in the pulpit he preached for greater understanding between Americans and Puerto Ricans. Don Jorge’s pious reputation probably shielded him when he criticized fellow Mennonites. His daughter Miriam Lauver remembered that he didn’t hesitate to criticize farmers who housed tomateros or migrant farm workers, in sub-standard housing. “If this is not good enough for you, then it is not good enough for them.” Religious discourse provided another way for Puerto Ricans to develop relationships with white Americans, with God, and to advocate for themselves.[10]

Puerto Rican Mennonites helped us understand their religious history and how it intersected with the Great Migration to the United States. The Director of the Lancaster Mennonite Historical Society, Rolando Santiago was raised in La Plata and introduced us to other unofficial histories such as Miriam Lauver and also Ramona Rivera Santiago, the daughter of a Mennonite tomatero. Ramona Santiago lived for a few years in a converted chicken house behind the farm house of a Mennonite family who had informally adopted her family. The relationship, and the love between the Santiagos and Weavers, is covered in the children’s novel At Every Gate a Pearl. Rivera Santiago recalled Elmer Weaver as “Papa Weaver,” treated everyone with respect. For that reason “many people, especially those Puerto Ricans whose lives you touched...with word or deed will always remember you.”[11]

As an adult, one of Rivera Santiago’s prize possessions was part of a chicken house used to house tomateros in the 1950s. Her father and another man had lived in that "cave," and they wrote two messages on the wall: “this is my cave” (in Spanish, ectaez la cuebo del PV, 1955) and “Remembering of Pedro Ventura, 1955” (in English). They left a mark that they were there and deserved to be remembered.

That kind of voice of the voiceless, an enigmatic message on the wall of a shed, was the seed for his exhibit. Much of what we did was to give voice to that sentiment, to show that Puerto Ricans and others have roots in this area, have contributed to its prosperity and history, and deserve to be remembered and understood. One piece of that was to expose the deep roots of Spanish-speaking people in Pennsylvania. There were Spanish-speaking immigrants who supported the American Revolution; others fought in the Civil War and won the Congressional Medal of Honor.

We also constructed half of a chicken house for the exhibit. The structure was cobbled together with scraps of salvaged wood, and based on research conducted by the National Park Service and the Pennsylvania Historical and Museum Commission on migrant housing.[12] The 8’ by 16’ space included an old army cot (typically used to accommodate tomateros), with period suitcases and clothing. We used burlap in lieu of a full roof as it let in some light but conveyed the cramped and uncomfortable nature of this kind of housing. The point was to help people understand the graffiti, which Ivette carefully painted on one of its walls.

Ivette’s photographs of people in Lebanon was another way to demonstrate that Puerto Ricans and other Latinos contribute to the economic and cultural life of the region. Individual photographs complement the documentary work done by earlier artists, such as Frank Espada and Rolfe Ross. Her photos became the basis for many of our historical posters, from Mennonite women to another on the celebration of the Virgen de Guadaluape at a Catholic church in Lebanon. We are happy to contribute to the wider understanding of Puerto Ricans in small-town Pennsylvania, which we believe is an important chapter in the history of a people.

"Dutchirican: Latino History in Central Pennsylvania" will be on display at the Suzanne H. Arnold Art Gallery at Lebanon Valley College from June 30th to August 13th. For more information, click here.