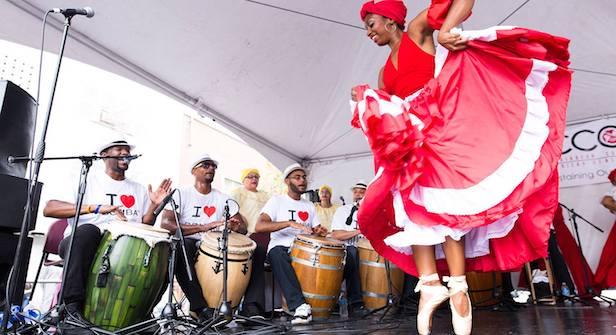 Five years ago, Aida Pérez approached the Caribbean Cultural Center and African Diaspora Institute, or CCCADI, to help her ensure the survival of the Festival Santiago Apóstol De Loíza En El Barrio, more commonly referred to as the Loíza Festival, she and others—all who had since passed—had co-founded more than four decades earlier. Lack of funding, among other things, had threatened the annual three-day event, which recreates the fiesta patronal, or patron saint holiday, held in the coastal town of Loíza Aldea in Puerto Rico. Since then, the Harlem-based nonprofit has partnered with Los Hermanos Fraternos de Loíza in the revitalization of the festival.

“It’s important for this legacy to continue in El Barrio,” says Melody Capote, Deputy Director of CCCADI, who has worked with the daughter and granddaughter of Aida Pérez over the past five years to secure additional funding, partnerships, and sponsorships for the festival. Like her grandmother, Leslie Lind now carries on that legacy as Executive Director of Los Hermanos Fraternos de Loíza, the nonprofit organization of families with ties to Loíza Aldea that presents the festival each year.

This weekend will mark the 50th edition of the Loíza Festival. For Melody Capote, who, along with CCCADI Founder and President Marta Moreno Vega, was born and raised in East Harlem, the festival is a reminder that, “El Barrio is still a very Puerto Rican community.” The names of many of the streets in the neighborhood echo this sentiment. In fact, this year the original location of the festival, 105th St. and Lexington Ave., will be officially renamed Ms. Aida Perez-Loiza Aldea Lane (due to construction, its new location is on 109th St. between 2nd and 3rd Ave.). “The idea is to provide knowledge, information, and access,” explains Capote, while noting the lasting impact this will have on future generations: “No matter where the festival goes, we know that this was its founding place.”

Moreover, the event aligns with the overall mission of CCCADI. “If we’re looking at the African influence in Puerto Rico or the African influence in cultural contributions globally,” says Capote, “We need to remind ourselves of the important roles we play.” That means highlighting traditional genres of music such as bomba and plena, for instance, while also recognizing the Afro-Caribbean influence on genres such as salsa to even hip-hop. “The beat of the drum in bomba is the same beat of the drum that you’re going to get in salsa music, the same beat of the drum you’re hearing in hip-hop,” says Capote.

It also means bringing together different generations from the community to share these cultural traditions and influences. Juan Gutierrez, founder of the community-based nonprofit organization and music ensemble Los Pleneros de la 21, is padrino of the Loíza Festival this year and represents the elder generation. Los Pleneros will also be one of the headlining acts on Sunday to close the festival. As Melody Capote explains, Gutierrez, who founded the organization in 1983, deserved credit for playing and teaching bomba and plena to the younger generations long before its current revival. Manuela Arciniegas, the madrina of the festival, has adopted a similar role in the community, performing and teaching traditional Afro-Puerto Rican and Afro-Dominican music throughout the city. Arciniegas, along with other performers at the festival, represent a younger generation continuing the work of individuals such as Gutierrez, the Pérez family, and others.

The festival is also a way of pushing back against the displacement faced by many longtime residents of the neighborhood. Rezoning proposals, increasing rents, and the arrival of newcomers, among other issues, have been a concern in recent years. The festival, in a way, helps to bridge this gap between young and old, transplants and natives. As Capote explains, “The festival really serves as a reminder to those of us who are well-versed in our culture and for those who are not,” adding, “A person who knows nothing about Puerto Rico or bomba and plena, that comes to the festival, is going to walk away with some information.”

In addition, this year, both the festival in Puerto Rico and El Barrio will occur simultaneously: July 28th-30th. There will also be a live stream available for residents of Loíza Aldea to watch the festivities taking place more than 1,600 miles away, thus bringing the diaspora and the island even closer. “It [the festival] absolutely reflects the Puerto Rican experience...particularly the experiences and traditions that come from Loíza,” says Capote. The Procession of Saints, for example, which takes place each day of the festival in Puerto Rico (one for the women, one for the men, and one for the children), is mirrored by the procession scheduled for Sunday afternoon in El Barrio, leaving from St. Cecilia Church at 106th St. and Park Ave at 1pm.

Around the corner, on a Friday afternoon, Aida Pérez will join countless other Puerto Rican pioneers in having built a lasting legacy in El Barrio, her name above the intersection of Lexignton Ave. and 105th St. And five years later, the festival she helped to organize for 35 years will continue in good hands, hopefully for generations to come.

The Loíza Festival is free and open to the public. More information and the festival schedule is available by clicking here.

It’s hard to miss the cabezudos that line the hallway of the Loisaida Center once you...
Dutchiricans: A Latino History in Central Pennsylvania, "On Women & Photography"