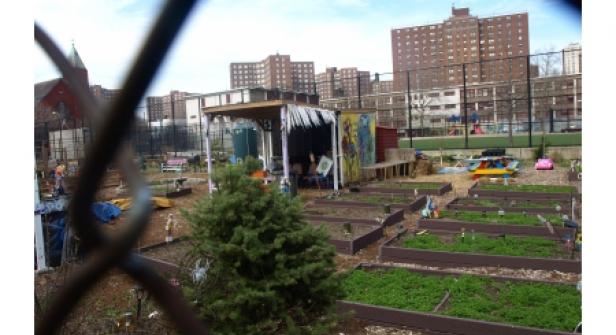 These early weeks of Spring remind me that it's time to come outside. Not having to drag the kids out with layers of wool and windbreakers that come back full of snot from runny noses and reeking of some noxious smell caused by wet socks is inspiring. Once Spring hits in New York City, I am off with my offspring. There is plenty of nature, family hangouts and meeting places in this city for families to enjoy the weather and get back to nature. We set to explore the community gardens that have flourished in the neighborhoods where Puerto Ricans planted their roots over forty years ago. But Winter was harsh this year and most gardens are not fully back from it yet. Through my children's exploration, casual conversations with community members and garden care takers, these public spaces came to life in front of my eyes. Getting back to nature took us on a trip back in history too. Exploring New York City gardens and outdoor community spaces re-connected us to the history of the Puerto Rican community in the city. From the Lower East Side to the South Bronx, gardens are blooming with the first flowers and also the first flags as we discover the well-cemented Puerto Rican roots still flourishing in New York City.

THE LOWER EAST SIDE
The history of community gardens in the Lower East Side of Manhattan spans over 40 years, and Puerto Ricans were central to these efforts. These spaces started sprouting up thanks to community members that grew tired of seeing empty lots, burned down buildings and rat infested spaces next to their apartments. Some gardens had an early start, such as El Jardín del Paraíso (at 321 E. 4th St. bet. Ave. C & D). In 1962, community resident Luis Torres started cleaning an empty lot across the street from his building, joined later by his neighbor José Ayala. They wanted to create a meeting place, a space to chill, share food and have a conversation while their kids played. Some years later, once the space was inhabitable and clean, they built a casita that reminded them of the houses of their childhood back in Puerto Rico. By this time, more neighbors joined in and throughout the years those who came and went also became involved in these efforts. Today, community members maintain garden plots and have built a magnificent tree house under a weeping willow tree for the enjoyment of children. Another community resident, Don Angelo, has been a member for over 20 years but just started planting a plot 4 years ago. “I plant amapolas and cilantro, and we celebrated my grandaughter’s birthday last year,” he said. He helped build la casita at the garden. He recalls, “new members, mostly anglo, did not like the idea. But we built it anyway and everybody loves it now.” 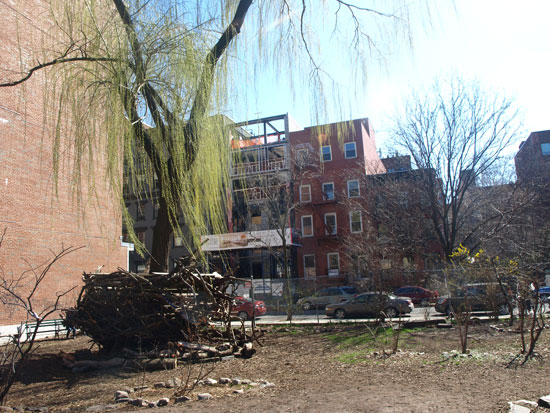 The casitas stand as a sign of Boricua presence in community gardens across the city. Perfect examples are the ones at Brisas del Caribe (at 237 E. 3rd St. bet. Ave. B & C). Brisas has been opened since 1986 thanks to the efforts of Mary and Angel Aponte, a neighborhood couple. The garden is supported by Green Guerrillas and actually hosts two casitas. Attendees from the Nuyorican Poets Café located across the street frequently stop by and neighborhood children visit with their school classes. Plants and trees are labeled; wind chimes, statues, totems and flags are on display at children’s eye level. This makes urban gardens an unconventional opportunity for children to explore and learn. My children greatly enjoyed two gardens located just across from the The Loisaida Center: The 9th Street Community Garden (at 9th St. and Ave. C) founded in 1978 by Agustine “Nin” García and La Plaza Cultural Armando Perez (at 9th St. and Ave. C). 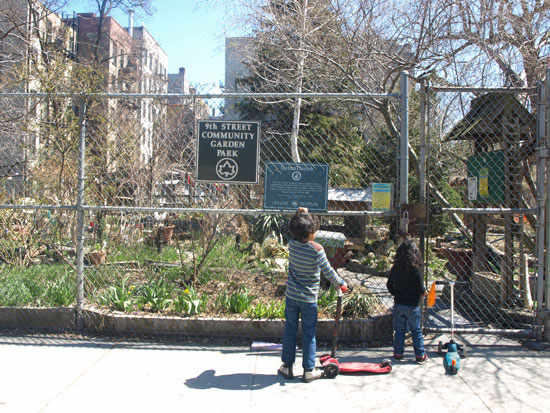 La Plaza Cultural was founded in 1977 by a group of Puerto Rican ex-gang members turned community activists called CHARAS. Their name is an acronym composed of the initials of its founders, among them Chino Garcia and Armando Perez. CHARAS gained a reputation for innovation and creatively fostering community-based urban ecology, arts and culture. According to a 1971 New York Times article, CHARAS and its members have been called "pioneers in urban ecology.” Ross Martin, a garden member at La Plaza Cultural, recognizes the contributions of CHARAS: “they did a lot of local enterprises such as University of the Street, small business initiatives, and ESL workshops for the community.” In 2002, the garden was named after Armando Perez, founder of El Bohio Cultural Community Center, who died tragically in 1999 at the age of 51. Pieces of history like that of CHARAS are preserved on murals around the LES, such as the one by Brooklyn artist Maria Dominguez. Her mural "La Lucha Continua" still stands tall on the side of a building facing the plaza and was painted in 1985 and funded by ARTMAKERS, an organization that helps get communities involved in murals’ creations. 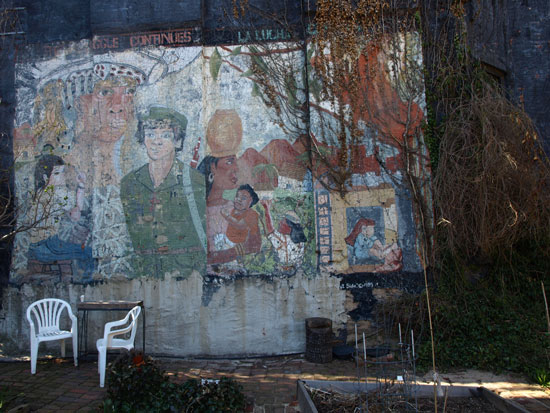 When I took my kids to the area, we took our time visiting the LES gardens and had mofongo, rice and beans at Casa Adela for lunch. But it could also become a whole weekend rediscovering adventure by visiting the monumental street fair the Loisaida Festival on Memorial Day weekend (May 22-24, 2015). At the end of the day I left inspired by the Puerto Rican history of community building and activism imbedded in the spaces and people in these gardens. Just a trip with your family and some conversation with the locals while the kids play can spark a gain of a wealth of information otherwise buried underground.

THE SOUTH BRONX
Community gardens in the South Bronx also have a long history of community building and engagement. I was lucky enough to stumble upon the very first garden that started the tradition in the South Bronx, Rincón Criollo (at 157th St. and Brook Ave.), also know as the Jose Manuel Soto Community Garden. Jose Manuel “Chema” and José Rivera, two founding members, shared some insights about Rincon Criollo’s history, “This yard is one of the first…” said Rivera. “The first!” clarified Don Chema, “The first yard that opened here in the South Bronx after the Great Blackout of 1969. In addition to this garden, we have helped open many other spaces in the neighborhood such as ball parks and recreational areas.” Gardens such as El Batey Borincano (at 815 Eagle Ave.), Palmas del Caribe (at 869 Eagle Ave.) and El Flamboyan (at 592 Tinton Ave.) are all results of community efforts from neighbors and born out of the necessity to find a space in the community to congregate, make music and find safe spaces for children to play. “El Rincón Criollo started as an initiative of the community, we wanted to have a place for the Puerto Rican culture to flourish,” said Rivera, who is also a musician with Pleneros de la 21. This bomba and plena institution, led by Juan Gutiérrez, emerged from Rincón Criollo. Through the years, Rincón Criollo transformed, moved locations, and grew. 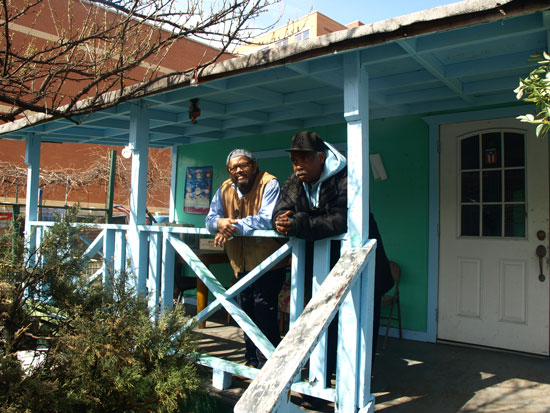 Today it hosts a stage, member’s plots for planting, some chickens, an outdoor kitchen to make lechón asao and a workshop for instrument making and repairs. Central to the space is la casita de Don Chema, the object of a popular song, which he started building with his own hands. About the process and the inspiration for making la casita he says, “this garden is a memory of my grandmother, Doña Angela Clemente. I was born in a house like this, then came to NY and was a super in one of these buildings. I decided to make a house opposite the building: on the sidewalk. I put a panel and I called it La Parada, it looked like a bus stop in Puerto Rico. Then we went into the space through a hole in the fence, cleaned the space and made the house,” remembers Don Chema. Today Rincón Criollo hosts twelve annual events open to the community. The first of the season was on Mother’s Day (May 10, 2015) followed by the Caribbean Culture Tour (June 6, 2015), part of the Bronx Food and Farm Trolley Tour and sponsored by the Bronx Boro President’s Office. 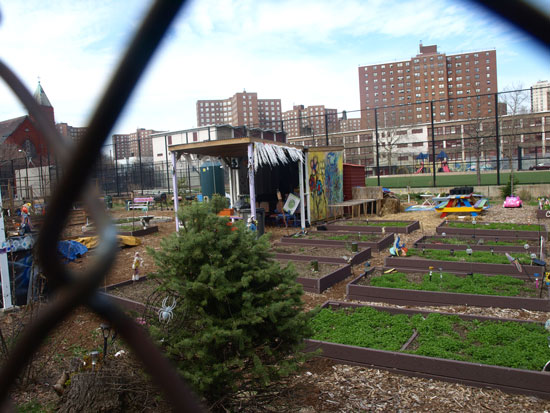 Garden of Life and Health,  Bronx

A pair of hands, such as those of Don Chema, can start a wave of change and community awakening. The influence of musicians and their necessity to congregate and play is entwined in the history of these community spaces in the South Bronx that still today open it’s gates to gatherings focused on family and community enjoyment.

It is easy to think that the casitas and flags found in a great number of community gardens in the city are the most notable signs of the Puerto Rican community heritage. But the legacy of building green spaces, so entwined with community building, is a powerful if silent legacy that needs to be celebrated. Whether we plant cilantro, amapolas or just banderas, Spring seems to me like a perfect time to explore nature and neighborhoods, especially those that hold so close stories of community building and resilience of Puerto Ricans in New York City. Before sustainable movements were in, Puerto Ricans were knee deep in the kinds of practices that make the city today an attraction to so many. So, just come out already with the whole family, and see with your own eyes the sprouting of our community gardens and that of the Puerto Rican culture, still lively and proud in New York City.

The literature on casitas is extensive. If you are interested in learning about the roots of the community gardening movement, casitas, Puerto Ricans and their struggle to sustain its culture amid the transformations of New York City neighborhoods the sources below will provide you with a good start. For the most recent research consult Power at the Roots by Miranda Martinez.

Aponte-Parés, Luis. 1995. What’s yellow and white and has land all around it?: Appropriating place in Puerto Rican barrios. CENTRO: Journal of the Center for Puerto Rican Studies 7(1): 8–19

Martinez, Miranda. 2010. Power at the Roots: Gentrification, Community Gardens, and the Puerto Ricans of the Lower East Side. Lanham, MD: Lexington Books. [For an academic discussion at the Center for Puerto Rican Studies of this important book please click here.]

Sciorra, Joseph. Photographs by Martha Cooper. “We Not Here Just to Plant. We Have Culture”: An Ethnography of the South Bronx Casita Ricón Criollo. New York Folklore 20(3–4): 19–41.