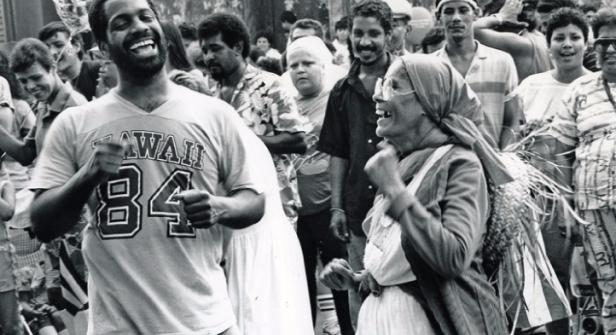 It was just this past October that the Carmen Pabón del Amanecer Jardín was inaugurated after seventeen years of delay. A ceremony was held at the East 7th and Avenue C location and the garden’s 94-year-old namesake was there help to cut the ribbon. Then, only a few weeks later, Carmen Pabón, known as “The Mother of Loisaida,” passed away, leaving behind six decades worth of community activism and social work.

Born in Puerto Rico in 1922, Pabón left the island for New York City in 1946 at the age of 23. She lived in the Bronx for those first few years, working in a factory to support herself and sending money to the twin sister who cared for her daughter. She went back to Puerto Rico for a few months in 1948 before returning to New York. After a short stint in Manhattan, Pabón was selected for the NYC housing lottery and moved to the Lower East Side in 1955 where she spent the rest of her life as a resident of the Lillian Wald Housing Projects. There, she raised eight children as a single mother.

Initially, Pabón aspired to study and become a nurse. She felt it was her calling to take care of people. But the cost of education was too expensive, so Pabón decided to become active in her local community instead. Drug addiction and homelessness were rampant in the Lower East Side during these years. Pabón began to take care of drug addicts she encountered in the streets, providing them with food, shelter, and clothing. Without a diploma or an official title, Pabón often likened her work to that of an unlicensed social worker.

In the late 1970s, she was involved in the New York City Community Garden movement, which began in the Lower East Side in 1973. Vacant lots were being converted into community gardens throughout the city and Pabón used these spaces to provide services to the homeless, elderly, and most vulnerable residents of the neighborhood. In 1984, she founded El Bello Amanecer Boriqueño Garden (informally known as the Carmen Pabón Garden) “with the goal of providing a place for the elderly and children in the neighborhood.”

After years of providing a variety of services to the community, the city, under the Giuliani administration sold the property to a private developer. Two of the three lots were lost to construction of a residential building, which included the Jardín de la Esperanza Hope Garden. In 1999, the NYC Council decided to convert the remaining lot into a permanent community garden and not-for-profit garden association. Pabón was awarded a 99-year lease on the property. El Bello Amanecer was also renamed in her honor and features a plaque that commemorates Pabón and describes the garden as an “urban sanctuary for children, local artists, Nuyorican poets, and the elderly.”

In 1979, Pabón worked alongside the founders of the CHARAS community organization to repurpose P.S. 64, an abandoned school overrun with junkies, into a community arts center known as El Bohío. Pabón was a volunteer there and also at the nearby Loisaida Inc. In addition to its support of the arts and culture, El Bohío also had a particular focus on urban ecology and provided after school programs. Yet after two decades, the city would auction the building and sell it to a private developer in 1998. Three years later, CHARAS / El Bohío was forced out, thus initiating an ongoing dispute between residents and the owner as to the future use of the building. In the intervening years, Pabón was active in the struggle to preserve El Bohío, appearing at events and galvanizing support. Around the same time, she was also a member of a coalition to protect St. Brigid’s Roman Catholic Church, which was later saved from demolition by an anonymous donor in 2008.

Over the years, Pabón received numerous honors and distinctions, including a certificate of recognition from Mayor Koch’s office and the Hispanic Heritage Senior of Distinction Award from the New York Power Authority. She also served on the Board of Housing Works. In 2003, the Lower East Side Biography Project released a 28-minute documentary film on the life of Carmen Pabón, which is available streaming online. Pabón was also known as an actress who wrote poetry.

Much of Pabón’s legacy is tied to the fate of the neighborhood, which has become a much different place in recent years. Yet there is comfort in knowing that the garden she considered a second home will endure for generations to come.

Special thanks to Marlis Momber, a commercial photographer who moved to and began documenting the East Village and Loisaida in the mid 1970’s, and was kind enough to share an image she took of Luis Rivera, son of Adela Fargas of the famously delicious Casa Adela, and Carmen Pabon, celebrating at the first Loisaida Festival in 1987.