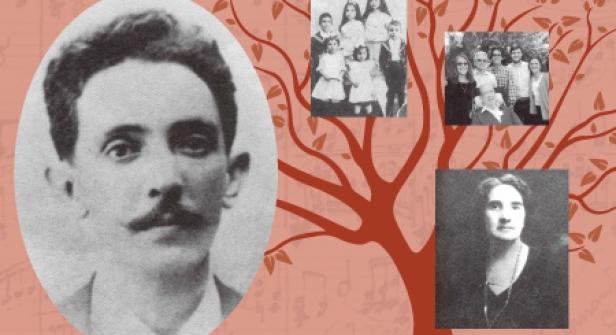 As members of the Puerto Rican diaspora, many of us trace our roots to that one family member, or  in some cases, several, who left the island to settle elsewhere. From there, we craft a narrative as Puerto Ricans here in the United States looking to carry on the legacy of those ancestors, even as the acquired distance, subsequent generations, and passing of time, take us further away.

For the Callejo-Correa family, the moment came in 1921 when Fernando Callejo moved to New York City with his wife Trini. By then, most of his children were already living here in the US. Callejo is known to musicologists as the father of Puerto Rican musical history, as well as a celebrated composer, educator, bandleader, and multi-instrumentalist. There is also a high school named for him in Manatí, the town where he would work as postmaster for several years with his wife in order to support his family.

Murray-Irizarry is the first scholar to write about the Callejo family. Genealogist Karen M. True, working with Professor Murray-Irizarry, did original research on multiple generations of the family; tracing their roots from Puerto Rico to Harlem, Brooklyn and ultimately Rutherford, New Jersey. Her research is reflected in the family tree included in Murray-Irizarry’s book.

It’s the musical legacy of Fernando Callejo that recently brought descendants of the Callejo-Correa family to Manati last month for the launch of the book, which included various festivities. The celebration, organized by Professor Murray-Irizarry, featured a concert and a renaming of a street in Fernando Callejo’s honor.

Rod Leith, historian for the town of Rutherford, New Jersey, notes that from Callejo’s oldest daughter Margarita to his last living daughter Olga–who celebrates her 103rd birthday this month–the family has maintained a special connection to the legacy of Fernando Callejo, despite scattering themselves throughout Puerto Rico, the United States, and abroad. This is the story of the twelve Callejo-Correa children and their families:

Margarita Callejo was the inspiration behind her father’s decision to publish a musical history of Puerto Rico. His intention was to raise funds to send her to Italy to study at the Musical Conservatory of Milan, where she would go on to train as a mezzo soprano.

Fernando, the first-born son of the Callejo-Correa family, was also a musician, but went on to become an engineer. He worked for the Port Authority, retiring in 1960 and then moving to Spain with his second wife. Rod Leith points out that both Fernando and his younger brothers Rafael and Sandalio worked on the construction of the George Washington Bridge, and that decades earlier, their father had participated in a celebratory musical honoring George Washington with a musical group he had started in Manatí.

Sandalio Callejo, his wife Lygia, and their two children Beatriz and Trini, lived in Cuba for fifteen years. There, Sandalio, also a musician, struck up friendships with three famous Spaniards: the poet Federico García Lorca; the painter, printer, and writer Gabriel García Maroto; and the pianist María Muñoz de Quevedo, founder of the Bach Music Conservatory of Havana. Sandalio’s brother Rafael, his wife “Susie,” and their daughter Grace, followed Sandalio to Cuba to work for the same Company where Sandalio was employed. Rafael, the youngest son, was also a musician. The family then moved to California. Sandalio worked initially as a translator in New York, then for an export-import company.

Cecilia Callejo was a Hollywood actress that appeared in fourteen films throughout the 1930s and 40s, most famously in The Cisco Kid Returns. Often cast as a Spanish dancer and celebrated for her ability to play the castanets, she worked alongside well-known actors of the era such as Tyrone Power and Rita Hayworth. Cecilia was also a noted fine artist.

Olga Callejo is the last living daughter of Fernando Callejo. Unlike her siblings who were musicians, she was the only athlete in the family; winning tennis championships in Rutherford when she was young.

However, in most cases, Fernando Callejo’s children learned to play one or more musical instruments before passing on an appreciation of the arts to the next generation.

For example, Fernando Jr.’s second son Ricardo, played the violin and joined his high school orchestra. Ricardo later became President of the Friends of the Lowell High School Orchestra. His daughter Franchesca would also learn to play the violin, as well as his granddaughter. For more than ten years, Franchesca’s family has organized Christmas concerts on the patio of their home in Berkeley, California. They also are in possession of manuscripts of Fernando Callejo’s musical compositions.

Beatriz Callejo, the first daughter of Sandalio, was accepted to the Conservatorio de Música Bach in Cuba at the age of five. Her family purchased a piano which was later moved to their home in California.

Grace Callejo, the only daughter of Rafael, was taught to sing by her Uncle Bernie, husband of her Tía Carmen, one of Fernando Callejo’s twelve children. Grace also learned to play guitar. Two of Grace’s three children, Marc and Dianne both learned to sing, with the latter also learning to play the flute.

Aside from the musical influence, the family Callejo-Correa has also left its mark in activism, the field of law, and academia. Ricardo Callejo, in addition to passing along a love of the violin to subsequent generations, was also a lawyer and activist who fought on behalf of Hispanic immigrant community in the Bay Area for 35 years. His older brother (also a lawyer) William, along with his wife, prominent Mexican-American lawyer and civil rights activist Adelfa Botello, were active supporting the Hispanic community in Dallas and founded an organization that to this day continues its work on behalf of Mexican immigrants.

Tessa Rouverol Callejo, granddaughter of Sandalio, is a community leader that works with the The San Francisco Foundation to defend the rights of immigrants. Her sister Alicia is an academic with a specialization in oral history and folklore. She has won several national and international awards for her work. She is currently studying in England for a PhD in Creative Writing.

So why bother to tell the story of a family and its success over the course of four generations? In an article titled “In the Grand Scheme of Things: An Exploration of the Meaning of Genealogical Research” for the Journal of Popular Culture**, Ronald Bishop cites several reasons for conducting genealogical research, two of which include the opportunity to place family history into a much larger historical context as well as acting upon a sense of responsibility to preserve the past for future generations.

To that second point, Ronald Bishop explains, “A perfectly accurate family history will never be written, because history continues to be made.” Of course, not everyone can trace their ancestry to a famous relative, but the Callejo-Correa family history reminds us, as members of the Puerto Rican diaspora, that we belong to an ongoing narrative and that having a foundation, musical or otherwise, can help give each successive generation a sense of identity, belonging, and purpose–three things that make living “ni de aquí, ni de allá” much easier to reconcile with in the long run.