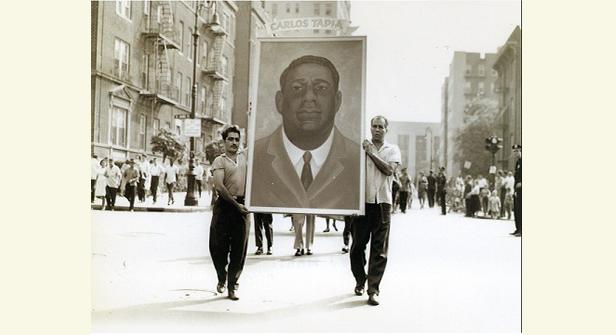 Though cancelled after just two seasons, Marvel’s Luke Cage introduced mass audiences to a superhero who valued his community above all else. Whereas in most cases, superheroes are expected to protect an entire city, country, planet, universe, etc.; Luke Cage dedicated himself to Harlem. Similarly, the early community of Puerto Ricans who settled along the Brooklyn waterfront after arriving by steamship during the Interwar Period relied heavily upon on one man, Carlos Tapia, for everything from basic necessities to much-needed protection from other established groups in New York City. Ramon Colón, the author of a short biography of Tapia entitled, Carlos Tapia: A Puerto Rican Hero in New York, described him as a “a one‐man department of welfare and a one‐man police department.”

Who Was Carlos Tapia?

Born in Ponce, Puerto Rico on December 27, 1885, Tapia was raised by a single mother in the Barrio Playa suburb before moving to San Juan as a young man. Though some records assert that he arrived in New York City in 1914, it is more likely that Tapia made the trip in 1920. Around that time, there were thousands of Puerto Ricans living in Brooklyn, mostly concentrated along the waterfront in neighborhoods like Red Hook and Borough Park. According to friend and fellow activist Antonia Denis, Tapia was initially unsuccessful finding work—a common problem for many working class Puerto Ricans living in Brooklyn at the time. So in 1921, he bought a horse and wagon and began selling ice and coal. He would later become a bolitero and bodeguero.

It wasn’t long before Tapia was helping Brooklyn Boricuas with everything from rent to food to, as previously mentioned, protection. At six-foot three inches and 250 lbs, Tapia was a physically imposing man who proudly considered himself, “an American negro of Puerto Rican origin.” Several stories found in Ramon Colon’s book confirm Tapia’s reputation as a fierce protector of his community. One such example involves a young Puerto Rican man who was being harassed by a group of white men for liking a white woman in the neighborhood. As the situation escalated, the family, distrustful of the police, turned to Carlos Tapia. Tapia suggested the family move to another neighborhood and offered to help. When they were later confronted by the group of white men, Tapia single handedly beat them up. In another incident, Tapia came across a farmworker from Cabo Rojo who was being assaulted by a group of five white men. He quickly intervened, beating all five men with only a trashcan cover to defend himself.

As a result of these acts of heroism, Tapia was targeted by police and in 1923, he was arrested and savagely beaten. Undeterred by this experience, he continued in his role as protector of the Puerto Rican community—and not just in Brooklyn. In 1926, Tapia organized a group of men and went to Spanish Harlem to conduct a raid on the various groups in the neighborhood that had been threatening Puerto Rican residents. Tapia was also politically active within the Puerto Rican community, arranging protection for Puerto Rican voters at the polls on election day in 1928. In addition, he was involved with Brooklyn social and political clubs such as the Puerto Rican Democratic Club and the Betances Democratic Club, the latter of which he helped found in 1929 in response to an incident in which two Puerto Ricans were shot and killed.

Perhaps the best example of how much Tapia went out of his way for others is the story of a single mother struggling to feed her five children. Upon hearing that an unemployed man had abandoned the family—supposedly to find work in New Jersey—Tapia tracked the man down, found him employment, and then reunited the family in Brooklyn.

In 1937, Tapia moved to East Harlem, where he would spend his remaining years. This came after he had unsuccessfully lobbied for Puerto Rican political clubs in Brooklyn to stop using the illicit numbers game as their primary source of funding. Regardless, the clubs were already in decline by then and Tapia, who owned a restaurant on 114th Street, likely decided to live closer to his business before his death in 1945.

Twenty years later, on September 13, 1965, a new elementary school in Bushwick was opened: P.S. 120 Carlos Tapia. It was the first time that a public school in New York City was named after a Puerto Rico-born resident and a fitting tribute to a man whose reputation rested firmly in the memory of the community he served.

To listen to individual testomonies of Carlos Tapia's reputation and contributions to the Puerto Rican community in New York City, check out the Puerto Rican Oral History Project, 1973-1975.