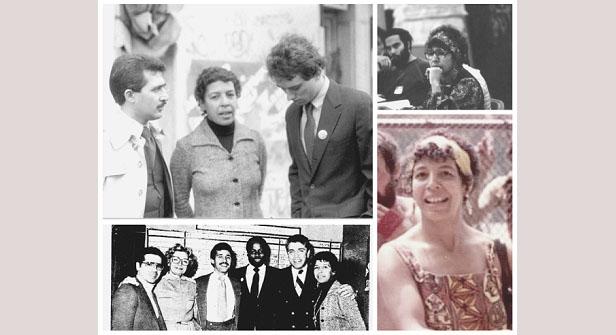 Editor’s Note: This past Memorial weekend, the 2019 Loisaida Festival took place. The event, which takes place along Avenue C each year, is a celebration of the Puerto Rican and Latinx community in the Lower East Side and New York City. Thirty-two years ago, the late educator, activist, and political pioneer, Loisaida Inc. founding executive director, Dora Collazo-Levy launched the Festival. This year, Dora was recognized with a posthumous VIVA Loisaida Award, which she created during her tenure to recognize individuals who have made a difference in the lives of neighborhood residents and carry forth its legacy of resilience, innovation, and creativity. Other 2019 VIVA awardees were Iris Morales, former Young Lord and author; Tom Brausell, former MLB Executive; LES favorite son and local Assemblyman, the Hon. Harvey Epstein; and District Leader-elect, LGBTQ activist, and another LES favorite son, John Blasco.

Elizabeth Colón, who was a founding member of Loisaida Inc. along with the late Collazo-Levy, carries on the legacy of commitment and love that her former mentor had her people, social justice, and political activism.

Born in Ponce, Puerto Rico, Dora Collazo attended its public schools and graduated from the Catholic University before moving to New York City in 1954. Here, she attended Brooklyn College and graduated with a B.A degree, and later received a Master’s Degree in Education and a PhD-ABT from New York University, where she pursued a doctorate in Linguistics and Communications.

Starting under the Kennedy Administration, between 1963 and 1965, Dora joined the Peace Corps serving as a teacher trainer stationed in Colombia. During the two years she spent there, Dora was part of a special education project pioneering in the use of educational television as a way of reaching more students in the urban and rural areas of that nation.

Her interest in education was lifelong. From the late 1960s onward, she was a New York City schoolteacher for 12 years at the elementary and secondary levels, a professor at Fordham University and Newark State College, and an articulate, forceful leader in the movement for the decentralization of schools, community control, and bilingual education. Dora was a creative teacher as well as a program director with very high standards for teachers at all levels—both as an advocate for daycare (bilingual infant and preschool programs) and fully bilingual primary and secondary education. Collazo-Levy created programs for community leaders on decentralization of city government at the Center for Urban Education and the Community Services Society, focusing on full relevant parent participation and community control. In School District One (the Lower East Side) with the first Puerto Rican Superintendent, Luis Fuentes, Dora created and directed innovative programs in Bilingual & Trilingual Education. In addition, she authored the first Spanish language book printed in New York City teaching Spanish-speaking children to read.

Through her involvement with community issues, Dora led many to embrace a concept of neighborhood development based on a foundation of self-determination and self-help that emphasized commonality of interests and social justice taking a populist approach to representative government and our community’s right to full participation at all levels. She, along with local activists and progressive individuals with involvement in movement politics of diverse backgrounds, such as the iconic Doña Petra Santiago and her son Arturo Santiago, Nick Sanchez, David Diaz, Ernesto Martinez, and myself. Herson Cabreras and Jesus Abraham ‘Tato’ Laviera created an insurgent local political club ‘El New Jibaro.’ Eventually New Jibaro won the local Democratic Party District Leadership. Dora Collazo-Levy was its Female District Leader and the first ever Puerto Rican woman representing the Lower East Side, serving for several terms (1973-1978). She also ran for Council and later for State Senate.

Along the way, this amazing woman also became the founding executive director of Loisaida Inc., a local community development arts and culture organization created in 1979 following a year of town meetings (a process led by Dora herself, and Tato Laviera, among others such as artist and poet Bimbo Rivas). It was called The Challenge for Those Who Dare: Unity, Planning & Action--UPA!, and served as the seed-bed for the development of many Loisaida programs, and later, the Loisaida Festival. Dora and Loisaida, Inc. became the force behind the renaming of Avenue C to Loisaida Avenue.

Dora was a mentor to dozens of women, particularly young teachers and activists, who later went on to become leaders in the Bilingual Education movement themselves. She received many awards, including the Community Service Society’s Ellen Lurie Award, the NYC Mayor’s Ethnic Award, Con Edison’s Community Service Award in 1987, and was the creator, along with other activists, of the VIVA Loisaida Awards, which were originally presented annually at the Joe Papp Public Theatre.

Dora Collazo was the wife of Dr. Alan Levy, and was the mother of two great children, Marcos and Rosita. Dora Collazo-Levy passed away too soon from cancer at the age of 53 in 1988. However, Dora left behind a vibrant legacy in Loisaida that is still growing today in the neighborhood she loved so much. The Loisaida, Inc. Festival celebrates that legacy every year.

In 2019, First Lady Chirlane McCray, along with Deputy Mayor Alicia Glen and the...
Puerto Rican Soldiers in the Korean War: The Battle of Chosin Reservoir

Editor's Note: The following is the first in a series of excerpts from Dr. Franqui-Rivera...