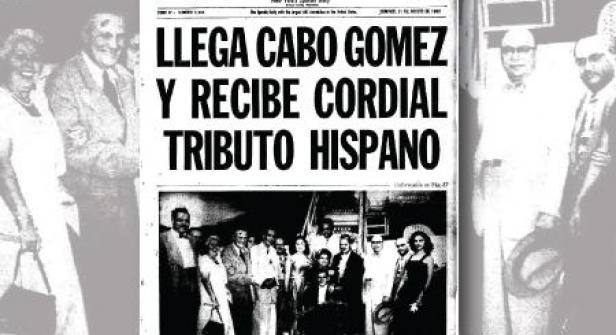 On August 30, 1952 at 2:18 PM an Eastern Airlines plane landed at La Guardia Airport in New York. The Puerto Rican and Hispanic community were highly anticipating this flight’s arrival. Corporal Ángel Gómez, a Puerto Rican soldier who suffered severe injuries in Korea was aboard that flight. Unbeknownst to him, his story had turned him into an icon for island-based Puerto Ricans and the growing Boricua colonias  in New York.

In September of 1951 El Diario de Nueva York published a picture of Gómez receiving medical treatment at the Walter Reed Military Hospital in Maryland. In the photograph he was learning how to use his new prosthetic limbs.

El Cabo Gómez, as the press referred to him, was born in Aibonito Puerto Rico. He lost his two legs and one arm in Korea due to a direct mortar hit the previous year. The Puerto Rican press highlighted that Corporal Gómez was the first soldier in the U.S. military to lose three limbs. While this may sound macabre, those wounded in war have a long history of becoming living examples of the sacrifices made for the nation.

Gómez appeared in the picture wearing a “pava” (Puerto Rico’s traditional peasant hat) with the inscription “Puerto Rico” in big bold letters. He appeared flanked by two women identified as Puerto Rican nurses. The article delivered the news that his mother, María Jiménez de Gómez, was arriving in Maryland to reunite with her son. The newspaper noted that Antonio Fernos Isern, Puerto Rico’s Resident Commissioner in Washington, would treat both the soldier and his mother to dinner.

Both the state and island-based press followed the story of El Cabo Gómez and routinely published updates on his improvement. They also listed donations given to Gomez on behalf of private individuals and businesses to aid him with his re-entry into civilian life. In August 1952, El Diario de Nueva York informed its readers that the corporal learned how to walk again and was trained to become a driver at Walter Reed Hospital.  El Diario also reported that the city of New York, where Gómez would stop briefly before returning to the island, was preparing a big reception for the “Puerto Rican hero” which would include city mayor Vincent Impelliteri, state representatives, and leaders of the Hispanic community. Gómez had family in the mainland and it was his plan to travel first to Baltimore where he would meet his aunt who would accompany him to Puerto Rico.

Throughout the Korean War, the private sector was interested in using the soldiers as part of their promotions  and to appear as unyielding supporters of the Puerto Rican soldiers and their efforts in Korea to “save democracy.”  Hence, news that  he would travel back to Puerto Rico by air on Eastern Airlines, and that his travel expenses had been paid by the Asociación de Productores de Azucar de Puerto Rico appeared next to non-stop airfare sales between San Juan and New York. Gómez would be neither the first nor the last Puerto Rican veteran from the Korean War to make his way back to the island via New York and to receive a heroes’ welcome by city officials and its rapidly growing Puerto Rican community.  Sometimes they would receive the City’s keys after parading through Harlem and the Bronx.

The press in New York was aware of the symbolic value of Gómez’s sacrifice. El Diario reported: “The trip to New York was a happy one. After debarking the plane that brought him to this city this heroic soldier’s face showed a big smile, evidence that for him it meant that he was a little closer to the Island he loves so much and to which he brought glory in the bloody battlefields of Korea.” The corporal was treated like celebrity during the few hours he stayed in New York. But he yearned to return to Puerto Rico.

The next day, August 31, 1952, he arrived to San Juan aboard an Eastern Airlines flight. He was received by elected officials who escorted him to the Caribe Hilton. The news reported that thousands of Puerto Ricans lined up the streets to greet the Puerto Rican hero. El Diario de Nueva York reprinted from El Mundo, an island-based newspaper:

“Corporal Angel Gómez, who left three of his limbs in the Korean battlefields, is getting ready to return to Puerto Rico. His body suffered grave amputations. But his indomitable spirit carries an imponderable strength: that of character purified by adversity.  At twenty-three years of age, missing his legs and one arm, he has not surrendered. Efficiently and gently rebuilt in Walter Reed Memorial Hospital of Washington, Gómez is not a human ruin. He is a symbol of the new man whom, without letting his will falter when his limbs broke, reemerges in life full of hope and decides to be useful again. During his long hours of pain and estrangement, his memories filled with nostalgia and dreams. It felt as if the return home was always delayed. But that day has come when he can say: “It gladdens me much, very much, to return home. There is no place like home.”

The story of El Cabo Gómez, as narrated by state and island-based outlets was full of symbolism;  the jíbaro turned war hero and surviving against all odds;  the reunification of the family thanks to the efforts of the Puerto Rican diaspora community and of elected officials. He was the living incarnation of the jíbaro turned soldier, a soldier that after returning to the island would create a modern Puerto Rico.

This was a tall order for any man, or woman. The next day El Cabo Gómez arrived to his hometown of Aibonito. Again he was received by local officials, businessmen, the clergy, and treated to parades and ceremonies. He finally fainted due to a combination of exhaustion and the fireworks fired on his honor. His physical recovery was nothing short of a miracle but his invisible wounds were still there.

Ángel Gómez intended to live a quiet life as a radio repairman strategically located near the University of Puerto Rico in Río Piedras. That would’ve been quite an accomplishment. After all he had been turned into a symbol of Puerto Rico’s indomitable spirit. Even for those who never knew his story his figure would’ve been unmistakable as he walked from his shop to the car especially designed for him. The military had paid half the cost of Gómez’s car, he paid for the rest, another sign of that unbreakable spirit reporters and public officials talked about.

I lost track of his story after he fainted in Aibonito. It has been difficult to find any more leads on what he did after returning to Puerto Rico. I hope that he was able to live a long, happy and peaceful life. I also wish that if any of his surviving relatives or friends read this piece they remember this Puerto Rican hero’s sacrifice.

Images and anecdotes retrieved from The Center for Puerto Rican Studies' archive collection.