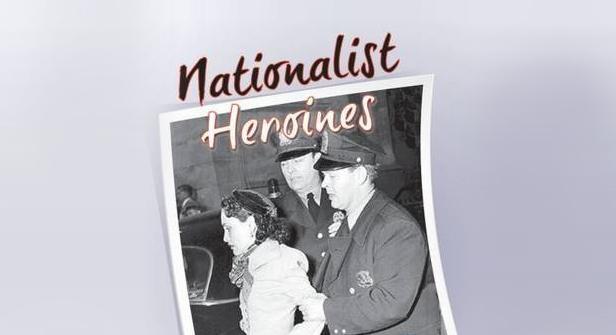 From the Ponce Massacre to the Nationalist uprisings of the 1950s, the story of Puerto Rico’s nationalism is often placed within the context of its most iconic moments, or president of its party, Don Pedro Albizu Campos. But women also played a significant role in Puerto Rico’s nationalist movement from the early to mid-20th century. Yet the names of only a few, most famously Lolita Lebrón, are evoked.

In 1950, for example, after the attack on the Blair House (temporary residence of President Truman at the time), 41 women were arrested, included the wives of each of the gunmen. And in Mayagüez, the names of at least 70 women can be found on a plaque which commemorates those who participated in the Nationalist struggle. Many more sacrificed their lives, were imprisoned and tortured, exiled.

Historians have largely ignored the stories of these women, much like the press that came before them. So in her latest book, Dr. Olga Jiménez de Wagenheim’s Nationalist Heroines: Puerto Rican Women History Forgot, 1930s-1950s attempts to recover the individual stories of these women, compiling sixteen in total and dividing them into four parts.

After providing a brief synopsis of the island’s history and history of the Nationalist Party, the opening section is dedicated to Dominga de la Cruz Becerril, a black working-class woman from Mayagüez and member of the Nationalist Party. She famously rescued the Puerto Rican flag during the 1937 Ponce Massacre, picking up the flag before it could hit the ground, after the person carrying it was wounded.

Blanca Canales is famous for leading El Grito de Jayuya which took place on October 30, 1950. She went to prison for 17 years before being released. Her childhood home in Jayuya was later converted into the Casa Museo Blanca Canales.

Carmen María Pérez, Ruth Mary Reynolds, and Olga Isabel Viscal Garriga were arrested together in 1950 and held at the infamous La Princesa jail. Ruth Mary Reynolds is the only non-Puerto Rican included in the book, although she is recognized for her dedication to the Nationalist cause and as one of the founders of the American League for Puerto Rico's Independence.

The third section switches perspective to the Nationalist movement within the United States. Included here are the stories of Lolita Lebrón, Rosa Cortés Collazo, and Carmen Dolores Otero de Torresola (also known as Lolita). The latter two women were also the wives of Oscar Collazo and Griselio Torresola, the two gunmen who attacked the Blair House in an attempt to assassinate President Truman.

In the last section, entitled “Brief Account of Other Women Arrested in Puerto Rico,” the author discusses five women (Juana Mills Rosa, Juanita Ojeda Maldonado, Ramona Padilla de Negrón, Angelina Torresola de Platet, and Monserrate Valle de López) who were well known members of the Nationalist Party and had been under surveillance for years before being arrested.

Jiménez has previously written about Puerto Rican history, including Puerto Rico: An Interpretive History From Pre-Columbian Times to 1900, Puerto Rico's Revolt for Independence: El Grito De Lares, and The Puerto Ricans: A Documentary History, which was co-edited with her husband. Jiménez is also co-founder the New Jersey Hispanic Research and Information Center (NJHRIC) of the Newark Public Library.

Centro will host a presentation of the book on Wednesday, December 7th. The author will be joined by Katherine T. McCaffrey and Jason Cortes for a brief panel discussion. For more details and to RSVP, click here.