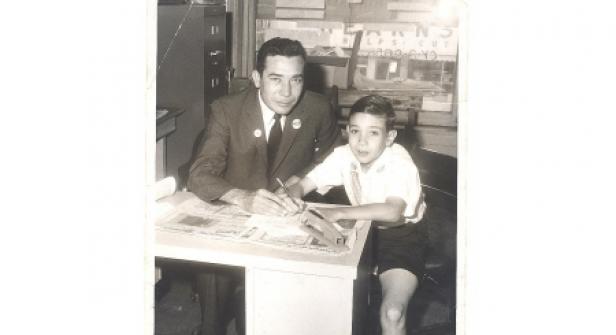 On December 3 in the middle of supporting the 43-city mobilization to stop U.S. foreign aid that fuels a vicious, inhumane drug war in Mexico and preparing for the press onslaught on the verdict of the killing of Eric Garner from a police choke hold, I learned that Herman Badillo passed away at the age of 85.

Everything stopped and went into slow motion. I was immediately saddened to know that my plans to invite Herman to a celebratory event next year to commemorate the 50th Anniversary of the Voting Rights Act just disappeared. I then began to immediately think of his legacy and that too gave me pause.

Herman Badillo was a complex man. He broke the mold of Puerto Rican activism and service by playing the pioneering role on so many important issues in politics, education, voting rights and community service. Later in life he changed his position on many of his earliest successes. He soured on bilingual education which was a critical first step in the integration of thousands of Puerto Rican students into the mainstream. He changed political alliances, something not completely uncommon in the world of politics.

His near-victory in one of many Democratic primaries for mayor scared Albany so much that it passed a questionable and discriminatory majority run-off requirement. That event plus his rejection by the Harlem black political establishment in favor of a weaker Denny Ferrell candidacy led eventually to his switching parties. Then that led to his inexplicable union with Mayor Rudy Giuliani. Herman either became more conservative or just expressed innate conservative views. He even had to backtrack from comments about Mexican immigrants to the city that had yet to learn English.

Herman Badillo was also a man of many accomplishments. As Juan Gonzalez wrote, for over 50 years few individuals have played as big a role in the life of a community than Herman Badillo. That community was the Puerto Rican community. In 1972 along with many luminaries he served on the original Board of Directors of the civil rights organization I now lead, the Puerto Rican Legal Defense & Education Fund, it was just another pioneering chapter for the original Puerto Rican pioneer that he was.

During the 40th Anniversary of the Voting Rights Act I organized a special commemoration to highlight his unique contributions to voting rights. Having him along with another voting rights veteran, Gilberto Gerena-Valentin was a treat for all of us in the audience. To me personally Herman was stately, gracious and very generous with his time. It is the lasting image that I have of him in an event commemorating what I think has been the peak of his incredible power and lasting legacy.

For in my opinion, Herman's biggest accomplishment was in expanding the franchise first to Spanish-dominant Puerto Rican voters in 1965, and then to millions of other language-minority voters in 1975.

He made American democracy stronger and more accessible. He made democracy multi-lingual.

The Voting Rights Act of 1965 was initially and deservedly aimed at restoring the dignity of the African-American voter. But even in 1965 it was never just black and white. It contained Section 4(e) which outlawed any state from imposing an English-only literacy test as a prerequisite for voting for any person schooled in an American flag school where the language of instruction was other than English. Only one place qualified, Puerto Rico.

Herman Badillo's testimony was eloquent and befitting of a person who put himself through college and law school at the top of each class after arriving in New York as an orphan with no English proficiency. Reading the transcripts of the hearings years later I visualized Herman epitomizing the stubborn pride of the Island's jíbaro culture as he challenged the "myth in our state of New York that a citizen can be an intelligent, well-informed voter only if he is literate in English."

The 1960 census pegged over 668,000 Puerto Ricans in New York City growing to almost 812,000 in 1970. So securing access to the ballot box for Spanish-dominant Puerto Rican voters was huge. The court victories enforcing Section 4(e) went further and established full bilingual access to written materials and verbal assistance on Election Day.

But Herman's legacy in this regard went much further. In 1975 then Rep. Badillo was in Congress and on the subcommittee that considered the Bilingual Assistance Amendments to the Voting Rights Act. On the table was the possibility of creating full bilingual access to the vote for certain language minority citizens.

The full House committee that recommended passage cited the progress New York City made with a bilingual voting system and declared that "the provision of bilingual materials is certainly not a radical step" in full recognition of the pioneering work of Badillo and others. When the amendments passed millions of Latino, Native American and Asian-American voters who had yet to fully master English were allowed access to the franchise.

Herman Badillo was a significant voice in ensuring greater electoral participation for them. Now all of us have benefitted from a broader voice in American politics.

Photograph: Herman Badillo, with his son David, at his Bronx campaign office during summer of 1965. At the time Badillo was running for Bronx Borough President. Photo courtesy of David Badillo.