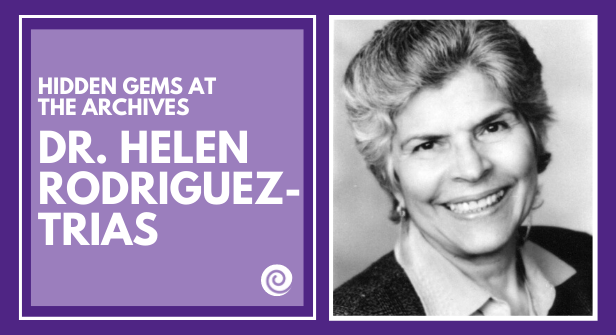 In 2019, First Lady Chirlane McCray, along with Deputy Mayor Alicia Glen and the Department of Cultural Affairs announced the commissioning of monuments or public artwork to commemorate the achievements of women who have impacted and changed lives in New York City. Dr. Rodríguez-Trías, a recipient of the Presidential Citizens Medal, among other honors, dedicated her life as a public servant to women, children, and underprivileged people. In honor of Women’s History Month, and in part of the second segment of Hidden Gems at The Archives, let’s revisit some of her lasting contributions and her legacy that continues to impact specifically the South Bronx, Puerto Rico, and women’s health.

Dr. Helen Rodríguez-Trías was born in 1929, New York City, to Puerto Rican parents. Her father, Damian Rodríguez, was a salesman and her mother, Josefa Trías, was a school teacher. Helen was influenced in her early youth by her mother, who strongly advocated for educational reforms in the schools on the island, and fought for school lunches to be provided for the students, as well as classes being taught in Spanish. Several language policies were implemented and enforced throughout the island during the beginning of the U.S. occupation.  Helen’s love for science started early on in school, in which she excelled, and inspired her to go to become a doctor, later on, aided her to bring her two passions together–social justice and medicine. Helen shared many similar experiences as her compatriots, migrating back and forth from the island to the mainland, due to economic hardships plaguing the island, as well as discrimination.

Helen had a unique knack for turning her personal experiences and tribulations into a stepping stone on making conditions better on a social and community level. Her own experience as a woman in need of efficient, compassionate and well equipped prenatal care with a system that did not reflect such, drove her to be an agent of social change. In 1960, Helen graduated from the University of Puerto Rico with her medical degree, with highest honors in her class, all the while juggling the roles of being a mother and spouse. As she began to get a feel for what social change would look like during her residency, Rodríguez-Trías established Puerto Rico’s first care center for newborn babies. She observed mothers and their newborns received minimal, if any, care which was less than adequate, which often led to irreversible outcomes. Under her supervision, the mortality rate for newborns improved by fifty percent within three years.

Returning to New York in 1970, she continued her service at Lincoln Hospital in the South Bronx. Civil unrest, along with inequality of medical services was rampant at the time. Native Bronxites referred to Lincoln Hospital as the “Butcher Shop” due to the inadequate public health care. Dr. Rodríguez-Trías used every skill and obstacle as a template to guide on finding resolutions that would resolve multiple groups of people simultaneously. She was one of the few, if not the only person, that was able to mend the bridge between medical staff, colleagues, political leaders, and patients. Her frequent usage of “code-switching” (speaking between English and Spanish) made her ability to relate to various groups easier, facilitating an understanding of the inequalities, disparities in the community that was tied with poverty. In 1971, she became the director of the Pediatrics. Due to her consistent engagement with patients, in addition to hosting group meetings dealing with women’s reproductive health, Dr. Rodríguez-Trías was able to present several issues that were problematic, not merely from a medical standpoint, but also as a basic human right. Although our healthcare system may have much room for improvement, her findings would change the system as we know it.

Her findings would soon be known to the public in a popular 1973 best-sellers, in close collaboration with the Boston Women’s Healthcare Book Collective Our Bodies, Ourselves. In 1977, concerning healthcare, Public Law 37 was passed, mandating hospitals and healthcare facilities to make patients aware of their rights. Her constant advocacy and efforts to ensure adequate healthcare for all made it possible for those inflicted with HIV/AIDS to also have access, in addition to training first responders to recognize the signs of domestic violence and sexual assault in patients' initial screenings and how to provide necessary resources. In 1993, Helen became the first Latina President of the APHA and later received the Presidential Citizens Medal from former President Clinton in 2001. Sadly, later that year, she lost her battle to lung cancer.

Many of the rights the public benefit today are due to Helen’s triumphs. To say that Rodriguez-Trias was a trailblazer is an understatement. She challenged and changed the healthcare system. Her vigilance and hard work made break-throughs a reality when many thought all hope was lost. In light of the global pandemic, along with the previous hardships, we have endured, Helen’s story is certainly a hopeful reminder that things will get better.

Construction on the statues is expected to be complete by 2021-2022.

About the author Dr. Harry Franqui-Rivera is an Associate Professor of History at...
Dora Collazo Levy, A Loisaida Icon Remembered

Editor’s Note: This past Memorial weekend, the 2019 Loisaida Festival took place. The...
Puerto Rican Soldiers in the Korean War: The Battle of Chosin Reservoir

Editor's Note: The following is the first in a series of excerpts from Dr. Franqui-Rivera...