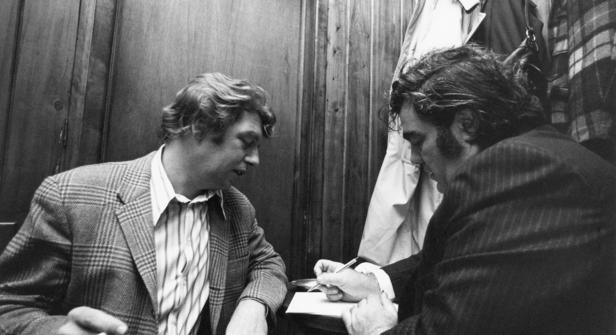 In the new HBO documentary Breslin and Hamill: Deadline Artists, there are numerous examples in which legendary New York City reporter Jimmy Breslin devoted his columns to the plight of working class residents from all backgrounds and regardless of race or gender.

One such example is the story of Cibella R. Borges, a young Puerto Rican woman who was suspended without pay and later discharged from her job as a police officer when the department found out that a nude photo of her appeared in a 1982 issue of Beaver magazine.

In the film, Borges describes the way local media spent weeks demonizing her with sensational headlines and biased coverage. In response, Breslin immediately wrote a column, “Por Unas Horas” (originally titled, “A better angle on a nude lady cop”) in which he detailed how a 22-year-old Borges had posed for the photos in a somewhat resigned mood upon finding out that a pending operation would likely leave her unable to bear children. “What’s the difference? I can’t have any kids, who’s going to marry me?” Breslin quoted her as saying.

At the time, Borges was working as a civilian administrative aide in the police department and also taught typing. This was 1980. The following year, she was sworn in as an officer after passing the patrolman’s exam and receiving her training at the police academy. According to Breslin, at four feet eleven inches, ninety-five pounds, Borges was the smallest police officer in the history of the NYPD. Height requirements had been eliminated in the 1970s after years of criticism from black and Puerto Rican communities in the city who labeled this policy as discriminatory.

In his column, Breslin goes on to describe the leniency with which officers with an Irish background were treated in comparison to Borges, in some cases, for much more serious offenses. Breslin cites a case in which an Irish officer testifies that he could not have impregnated a Puerto Rican woman because he would never have unprotected sex with a Puerto Rican. When asked how he ended up in the woman’s department, Breslin says the man’s drinking problem was considered a satisfactory response.

The Patrolmen’s Benevolent Association (PBA) later paid more than $16,000 for a full-page ad in The Daily News attacking Breslin for defending Borges with his column and exposing the lewd, abusive behavior of many male officers. The PBA also threatened Breslin’s newspaper with a boycott. Meanwhile, Borges was still paying dues as a member of the very same union that was technically supposed to represent her.

“Por Unas Horas” ends with Breslin highlighting the cycle of poverty and structural racism that Puerto Ricans and other working class minorities have faced in New York City. He writes, “And Cibella Borges has been suspended from her job, which paid over $400 a week, the most anyone in her family had ever earned…”

Borges eventually sued the NYPD. In 1985, she was awarded $80,000 for back pay, interest, and medical expenses. She was also reinstated as an officer, with the judge deciding that she could not be penalized for the photos because they were taken before she became an officer. Borges appears in the HBO film alongside Breslin, who passed away in 2017 at the age of 87. “He was in my corner, he was my champion,” Borges says.