Puerto Rican Soldiers in the Korean War: The Battle of Chosin Reservoir 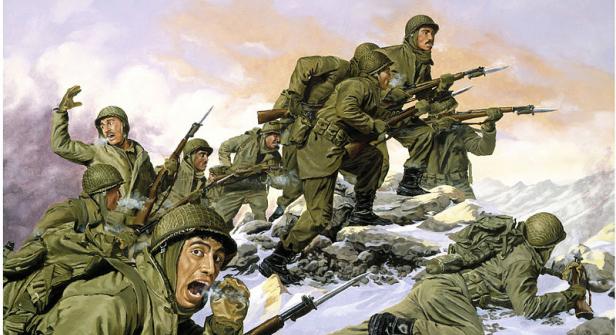 Editor's Note: The following is the first in a series of excerpts from Dr. Franqui-Rivera's forthcoming book, Fighting on Two Fronts: The Experience of the Puerto Rican Soldiers in the Korean War.

I have always liked listening to elders for they convey all the wisdom, emotions and feelings that history books can’t. In one of those conversations with Pepita Medina, an elder woman in Puerto Rico, she told me about the 1950s’ Christmas. It had been the saddest she could remember. Puerto Rican soldiers, “our boys,” as she put it, were in peril and no one dare to celebrate. Instead, Puerto Ricans were glued to their radios at home and in colmados and local bars. Local newspapers sold out as soon as they came out with news of los muchachos.”

In the Fall of 1950, a rude awakening shook the United Nations command fighting in Korea led by the United States. Though the story of the 1st Marines Division and their desperate escape from encirclement in the Chosin Reservoir is well-known, and deservedly so, the role played in this ordeal by a U.S. Army infantry regiment composed mostly of Puerto Ricans is barely known beyond small circles of surviving Puerto Rican soldiers who participated in this battle, their descendants, and a few scholars and activists who study the history of this Puerto Rican regiment, known as the Borinqueneers. And of course, there are elders like Pepita, who remember those days with a mix of sadness and pride.

“I wouldn’t go where you are being sent…”

In late October 1950, Major General Edward Almond summoned Colonel William W. Harris to X Corps Headquarters and ordered him to move his regiment back to the Port of Pusan in Korea. Harris commanded the 65th U.S. Army Regiment of Infantry, which was composed of Puerto Rican soldiers, NCOs (sergeants), junior officers, and White American officers. The 65th was to embark for Wonsan on the east coast of North Korea. From Wonsan, the 65th was to move immediately north to Yonghung, located midway between Wonsan and Hungnam. Almond also ordered Harris to operate in this area and extend to the west in order to link up with the 1st Cavalry Division on the Eighth Army’s right flank. All the while, the regiment was to engage with enemy in the sector (see map 1). 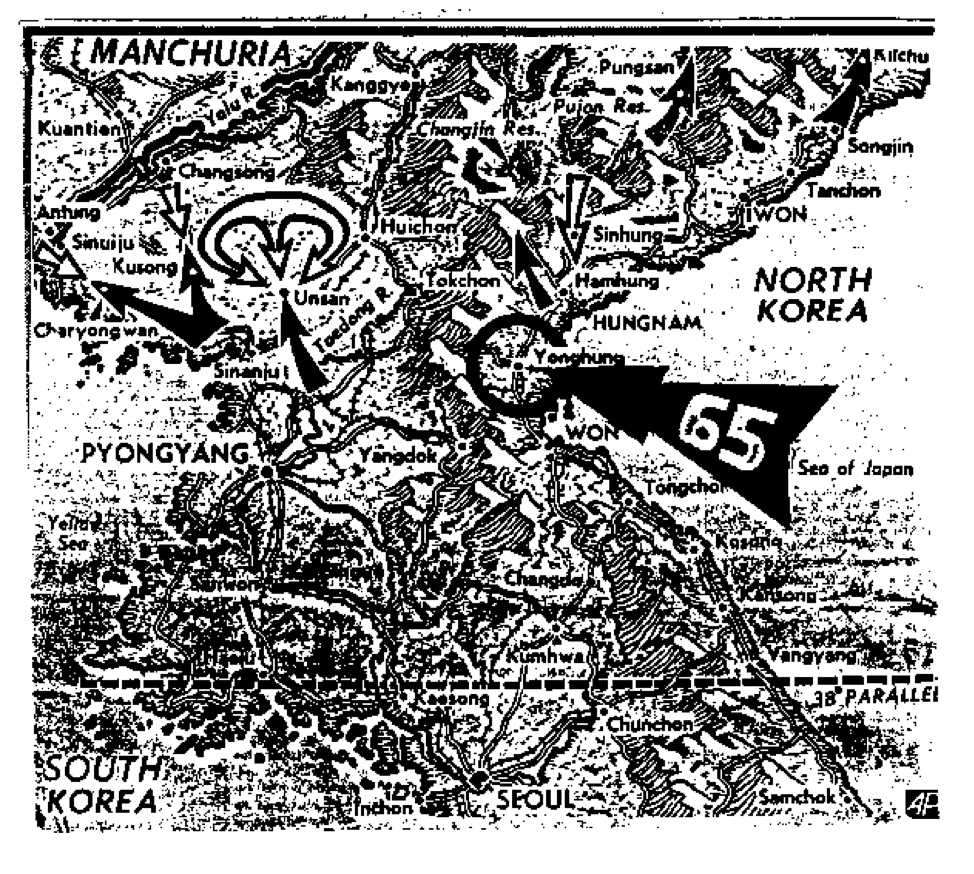 An old friend of Harris, Colonel Aubrey D. Smith, was serving as Almond’s supply officer. When Harris received his orders, Smith barked: “Bill, I wouldn’t go where you are being sent unless the corps gave me written orders to do so and at least four infantry divisions.” While Almond ignored Smith’s comment, Harris could not. Army intelligence estimated that about 25,000 North Korean People’s Army (NKPA) soldiers were in the area. The 65th Regimental Combat Team (RCT) consisted of only about 6,000 men. To make matters worse “no one really knew even the approximate location of Eighth Army’s right flank.”

Commanded by Lieutenant Colonel Dammer, the second battalion of the 65th, (2/65) left Wonsan on November 6, 1950. Unbeknownst to Harris, Almond had diverted the first and third battalions (1/65 and 3/65) and attached them to the 1st Marine Division. Thus the 2/65 proceeded to Yonghung piecemeal and without adequate ammunition (see map 2). 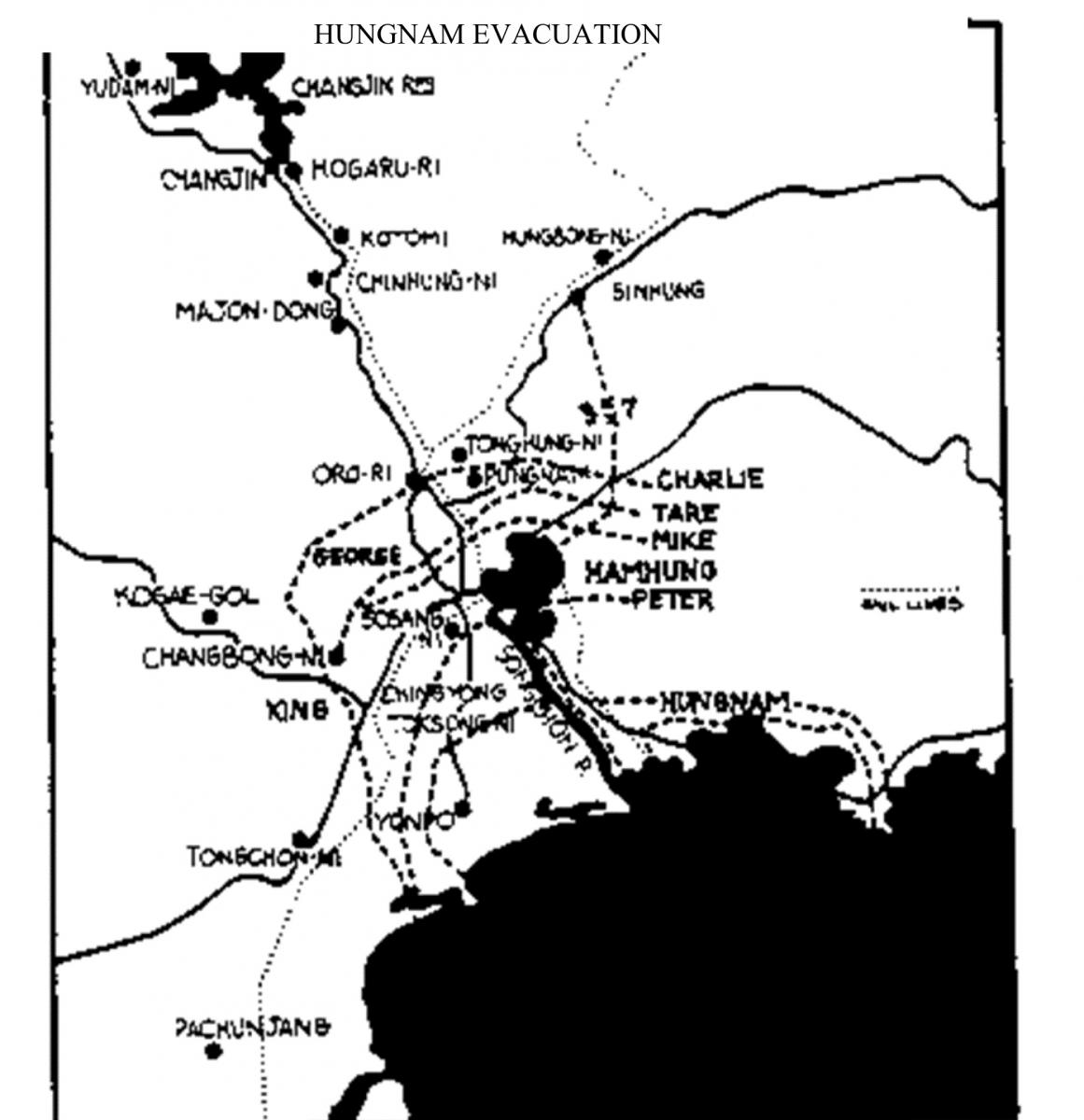 On the night of November 6-7, the 2/65 received a rude surprise. Mortar and rifle fire announced the enemy offensive. Instead of the usual NKPA attack, Puerto Ricans found themselves fighting Chinese troops. The attack started on the west side of the 2/65’s perimeter, but soon the whole perimeter was under intense pressure. An estimated two Chinese regiments participated in the attack. Throughout the night, the Borinqueneers held the line. By 4:00 in the morning, however, the 2/65 was running out of ammunition. So critical was the situation that Harris sent, in the clear, an operational priority message to Almond’s headquarters asking for an airdrop of basic load rifle ammunition and medical supplies.

With the first light of day came seven C-47s with the much-awaited airdrop. Cheering Borinqueneers came out their foxholes to retrieve the ammunition while yelling “maná del cielo,” or manna from heaven. The Chinese broke contact after the men of the 2/65 retrieved the airdrop. Dammer sent a patrol to maintain contact with the enemy. Scouts reported that the Chinese were holed up in a railroad tunnel. Several platoons were sent to force the Chinese into the tunnel while another platoon blew up both ends with TNT charges. Not only did the 2/65 repel the attack, but it completely destroyed the enemy force.

Eager to see what had happened the night before, General Almond flew to the 2/65’s position right after the airdrop. Harris informed him that two to three regiments had attacked the perimeter and that his unit had suffered many wounded but no killed. En route to the first aid station, Almond told Harris that he “didn’t have much confidence in these colored troops. Harris replied: “The men of the 65th are white Puerto Ricans.” He added that he had some black Puerto Ricans, and a colored artillery battalion and tank company, but even they “have fought like real troopers.” Yet after a fierce demonstration of courage against a superior enemy force, Almond still distrusted the Borinqueneers. The racial discrimination that white and Black Puerto Ricans suffered under their white officers would not end here and in fact, eventually crippled the regiment. But that story comes later.

On November 13, the 1/65 and 3/65 rejoined the regiment. Around that date, the rest of the 3rd Division (to which the 65th had been permanently attached) reached Korea. Soon after the 3rd Division reached the front, X Corps finally assigned well-defined operating zones for the 7th Infantry, 1st Marine, and the 3rd Infantry Divisions.

Between November 30 and December 1, 1950, the 65th RCT, which was at this time in the Hamhung-Hungnam area, received four sets of orders. The 65th RCT proceeded to Yonghung, then south to Wonsan, again to Yonghung, and finally back to the Hamhung-Hungnam area. X Corps had been issuing orders and counter-orders since November 25, when the Communist Chinese Forces (CCF) had launched a major offensive, throwing both the Eighth Army and X Corps off balance.

In an attempt to escape the CCF onslaught, General Almond had decided to evacuate his forces through the port of Hungnam in northeast Korea.  But first, the 1st Marine and the 7th Infantry Division had to break loose from the Chosin Reservoir.

The Chinese offensive had nearly encircled the 1st Marine Division.  By November 27, however, the Marines were fighting their way southwards. Four Chinese armies, with an estimated force of 120,000 soldiers, pursued the retreating column.

Major General Robert H. Soule, the 3rdDivision’s commander, sent Task Force Dog to meet the retreating column south of Koto. Task Force Dog included the 65th’s three infantry battalions, the third battalion of the 7th division (3/7), and the “Colored” 3/15.  The “Colored” tank and artillery units of the 65thand the self-propelled 155-mm guns of the 999thand 92ndFAB completed the task force. 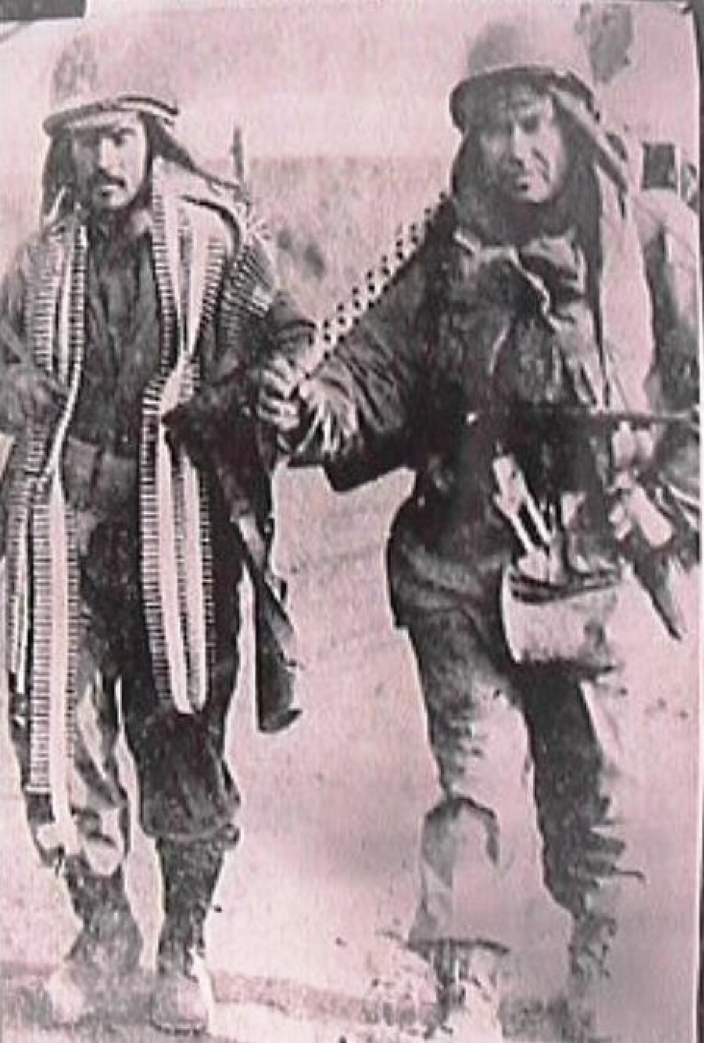 On December 7, Task Force Dog began to move north. The 65thled the way. Dammer’s 2/65 went forward to Majon, and Lt. Colonel Jerry Allen’s 3/65 to Oro. Frther south, Lieutenant Colonel Howard B. St. Clair’s 1/65 and Lieutenant Colonel Edward L. Farrel’s 3/15 established a baseline near Oro.  On December 7, the rest of Task Force Dog, with the 3/7 and G Company of the 2/65, jumped off from the 65th’s positions and continued north to Chinhung. Chinhung was a few miles from the Funchilin Pass, where the CCF had blown a bridge and eight treadway bridges had to be airdropped to allow the retreating marines to continue south. From the Funchilin Pass to Chinhung, the 1stBattalion of the 1st Marine Regiment and forward elements of Task Force Dog protected the retreating column.

More than five decades later, Juan Mercado Santana, a 65thveteran from Barranquitas, is still saddened by the sight of the battered marines commented: “They came through our lines when we were heating our rations. We felt so bad for them that we gave them our food, some cigarettes, and tried to cheer them up.”

Last to Get Out, últimos en salir

By December 13, the entire covering force had withdrawn within the protective lines of the 65thInfantry and the 3rdBattalion, 15thInfantry Regiment. From this point on, the 65th’s three infantry battalions and the 3/15 secured the roads to Hungnam.

On December 15, the 1stMarine Division finally sailed from Hungnam. During the month of December, thirty-six men from the 65thwere KIA, seventy-five were wounded, and twelve were missing in action—“compared to almost eight times that many lost by the enemy in their engagements with the regiment.”

The evacuation of Hungnam, however, was not yet concluded. General Almond deployed his 3rdand 7th Divisions in an arc-shaped perimeter to defend Hungnam. Army engineers demolished Hamhung on December 16. The next day, I Corps of the Republic of Korea’s Army (ROKA) evacuated Hungnam. One day later, the 3rdDivision assumed responsibility for the whole perimeter and the 7thDivision left Hungnam on the twenty-first. On December 22, the 3rdDivision began to withdraw.

The last infantry formation from the 3rdDivision left Hungnam on Christmas Eve. Lupercio Ortíz, a sergeant from the 65th’s headquarters company, was the last man to leave the beachhead. On December 26, El Mundo revealed:

“Now the island can breathe easy and receive the New Year with greater optimism and hope than it had at Christmas.” The editorial added, “The 65th is safe and back in Pusan and has covered itself with glory by its valiant service in protecting the embarkation of marines and soldiers.”

More was in store for the Puerto Rican regiment and the Borinqueneers. But the news that they were safe and had been the last ones to evacuate the besieged port brought much relief and pride to an oppressed and colonized people who saw the war as one to preserving democracy and creating a new Puerto Rico.

In the early 2000s, Pepita could not contain her big smile as she finished telling me her story and fully remembering the relief and joy she felt reading the news and listening to the radio; “Our boys” were safe.

Almost two decades after Pepita told me her triste navidadan American graduate student studying in the Netherlands sent me an email in which she shared that her grandfather was one of those Marines who, when they reached American lines and safety, were met by men from Puerto Rico. She is forever grateful.

Dr. Harry Franqui-Rivera is an Associate Professor of History at Bloomfield College, New Jersey. He is also the Executive Director of the New York Chapter of the National Puerto Rican Agenda, and author of Soldiers of the Nation: Military Service and Modern Puerto Rico, 1868-1952 (Studies in War, Society, and the Military Series) Nebraska University Press.