Reflections of a Father: Raising my Kids Puerto Rican 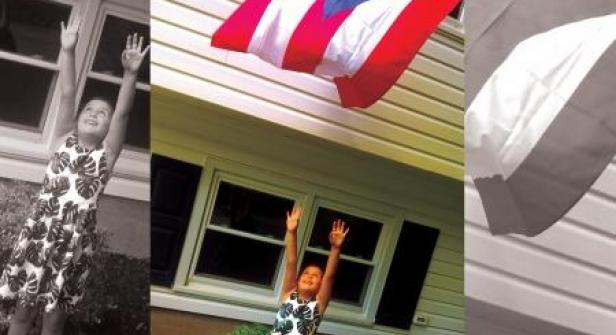 I was born in Añasco and raised in Mayagüez, Puerto Rico. There was never any doubt that I was Puerto Rican.  It was impossible to be anything else. Everything from the the food I ate, to the clothes I wore and the music I liked to the language and jeringonza and the way I spoke it- all confirmed my Puertoricanness. Because my puertorriqueñidad was innate, I never contemplated it.

Growing up, I paid no mind to the public campaigns intended to preserve puertoricanness and strengthen state-sponsored  national identities by teaching us how to speak “proper” Spanish of all things. “La lengua es la sangre del espiritu” or “language is the blood of our soul.” You can imagine that as a smart aleck teenager I mocked the campaign and so did my peers.

We were so Puerto Rican that when the national Basketball team played- especially against the United States- the island would come to a stand still. Even the owner of the factory where I  used to work would allow us to stop production and gather around an old TV to watch our team playing against the U.S. on a Saturday afternoon.

All this to say, we were undeniably Puerto Rican.

I also did not worry about my identity when I moved to the U.S. to study. Not when I was in Philadelphia, New Jersey, Massachusetts and much less when I moved to New York. Sure you visit the island and people ask you why you are speaking like a “Colombian, Venezuelan, Mexican, etc…” I would shrug it off as insularism.

Then my children were born in Massachusetts, which makes them Machurricans. I never thought I would have to think much about my children’s identity. Instead, I believed that they  they should and would become whoever they wanted to be and that I should not pressure them to feel any particular way about who they were in terms of national identity.

Why do it any other way?

For me, my identity as Puerto Rican was but a cultural aspect of who I was, an accident of history. I refused to let that part of me influence how I behaved, who I befriended, what I chose to eat, wear, watch, listen to or dance to as an adult.  So, I was not inclined to put my kids on a forced path to Puertoricanness.

I guess that I was not counting on our annual trips to the island- a “luxury” that as graduate students we could afford. Once there they were exposed to a world that they love (mostly because they don’t have school and every relative pampers them like if it were the end of the world). They can’t wait to get to Puerto Rico and it is always hard for them to leave.  But they know we are always going back.  The trips to the island led to my children getting a genuine interest in the culture and the history of the Puerto Ricans. I’m a historian so that was right up my alley. And just like that their lessons on puertorriqueñization started.

I do not think for a second that the ability to speak Spanish makes you Puerto Rican. If anything it makes you Hispano-phone. But I do believe in mastering as many languages as possible. And there was the need for my children to communicate with their relatives in Puerto Rico- many of whom don’t speak English. So when my first son was born we decided that we would  buy bilingual books for him and read the monolingual books in both languages. Same with counting and all our conversations. It is a taxing exercise.

We have had mixed results. I was still a graduate student  when he my son was born and for three years I was able to work from home and take care of him, which means that by the time he started daycare he was fully bilingual- and could fake some French.

My daughter on the other hand, went straight to daycare so she struggles with Spanish. Sometimes she refuses to speak at all. That is, until we go to Puerto Rico and the Rs come rolling out her tongue.

I don’t know how it happened but one day I caught myself buying them güiros and maracas and teaching them parranda songs.  Worse! I can’t refrain from buying every Puerto Rican “tchotchke” I can find or exposing them to things I consider Puerto Rican. Sometimes they appreciate them, sometimes they find them not cool enough. But they have come to truly appreciate their Puertoricanness.

One day I found my son with a sad face. He was upset that the Spaniards had destroyed Taino culture and that now he could not speak Arawak. He spent that summer painting his body with Taino-inspired images and using our fire pit as his own batey. He outgrew it, in part because that is what kids do but also because I told him that I identify more with our Black ancestry. But he is certain of his puertorriqueñidad. How could he not? He has been called a “Puerto Rican *#+*#”  on the school bus. And he is always asked where he comes from, or “what are you?”

To these questions he always answers “I’m Puerto Rican and American” My daughter’s answer? “I’m bilingual, what are you?”

Because of these encounters I have come to pay more attention to what they perceive as Puerto Rican and how they internalize it. The last thing I want for my children is to think they should not be proud of their heritage. At the same time, as much as I love going to Puerto Rico and being able to spend months on the island I don’t want them to grow up thinking that they have to perform the annual pilgrimage to the island to reaffirm their puertorriqueñidad.

More importantly, I don’t want my children to grow up thinking they are unwelcome guests in this country. So I tell them about our communities’ struggles for equality and how they fought to carve out spaces and how we benefit from their hard work and activism. I tell them that it  will be up to them to make sure those spaces continue to grow and become more welcoming.  The lesson being, that they do not need to be born in Puerto Rico to be Puerto Ricans, and that this country belongs to them, just as it belongs to any other person living in the United States, not despite of being Puerto Ricans but precisely because they are Boricuas. Maybe this way they will grow (to borrow from Arturo Torrecilla) without the anxiety of being Puerto Rican.