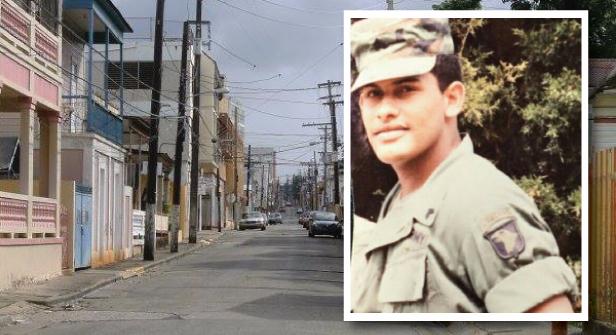 I was still a kid when I woke up one morning to find out one of my older brothers was gone. He had finished high school a few days before. Though I did not know, he had enlisted in the Army and had been preparing to leave. That morning he was on his way to Fort Benning in Georgia. Like tens or maybe hundreds of thousands of Puerto Ricans before him had done (and continue to do), he joined in search of a better life and opportunities.

My mother showed us a letter he had left. He said that he was very sorry, that he did not want to leave us but he had to go. He asked us to forgive him for not always being good, for being a troublemaker. He promised that he would return a changed man.

I didn't get why he was sorry. To me, he had always been there for us. He cared for us. He protected us. And so I looked up to him. I did not know he was feared in school. “No te metas con el negrito que pelea,” was a warning not to be ignored. Some teachers labeled him a trouble maker because of his constant fights in school. Other teachers understood and loved him and tried their best to help him in school. Those who knew him assured me he never started a fight but was good at ending them.

To me it was obvious that everything he did was meant to protect us while we grew up in a very hostile and violent environment. I could tell he did not enjoy fighting–even when he won (which was almost always the case). My brother was not a troublemaker. On the contrary, he was one of the kindest people I've ever met; the kind of person who, literally, gives you the shirt off his back.

Poverty is of course relative. You don’t know how poor you are until something available to the vast majority of the people is inaccessible to you; something as quotidian as a phone call. Back then, staying in touch was neither easy nor cheap. My brother started writing letters as soon as he could. Those were the kind of letters that thousands of Puerto Rican families receive from their members who have taken this route and scattered all over the United States and the world. But we wanted more than letters. But we couldn't afford a phone line. It was that simple. My brother found a way around it. I believe another Puerto Rican soldier in a similar situation suggested it. We wrote down the number of a pay phone three houses down the street. He then started to call that number from a pay phone. First from Georgia, then from Kentucky.  We would gather around the pay phone and wait for his calls. It was exciting to listen to his stories. He always started with great enthusiasm but between interruptions from a voice demanding in English more quarters to continue the call, and our frequent questions, “Cuando regresas?” he always ended up nostalgic, a bit sad.

Summer turned into fall, and fall gave way to tropical winter, (if there were actually such a thing in Puerto Rico) and with it came navidades. Though I had stopped believing in Santa and los Reyes Magos quite a while back, navidades was still my favorite holiday. I loved the food and the music. Overall, I loved that everyone seemed to be happy. But that Christmas in the early 1980s was different. My brother could not be with us. It was still fun, but not quite the same.

One evening, as I sat in the balcón reading a comic book, a cab drove up to our house. I had seen carros públicos on our street but never a taxi.

A soldier, wearing a green Class A uniform with a few ribbons and medals and a screaming eagle on his left shoulder, came out of the car. He paid the driver and took two green army duffle bags and a small brown leather bag from the cab’s trunk.

My brother had returned. I was speechless. He was an impressive man before he left and seemed to be stronger than all of us. Now he stood broad and strong as a ceiba. He started walking towards the house and I started yelling: “llegó, llegó, Harvey está aquí.” Everyone came out of the house before he made it inside. We all hugged him and made him cry.

We finally let him in. Once inside, my mother of course wanted to feed him. And like a good Puerto Rican mother found him too skinny. But he needed to do something first. He sat on a chair, opened his duffle bags and started to pull out wrapped boxes. He had brought gifts for all of us. I got a Millennium Falcon and I couldn’t believe it. I can’t remember if that evening was Christmas Eve (nochebuena) but it became so. His bags and clothes were army green instead of red but that mattered none. We always celebrated Three Kings Day more so than Christmas–not that year.

He had to save every penny those months so he could fly back during the holidays and bring gifts with him. That was our best Christmas–not because of the toys and gifts, but because he had returned as promised.

In what it felt like minutes (although it was probably more than a week) he was leaving again. We were sad, but we were okay. We knew he would be back and everything would be the same. He finally came back to stay a few years later to take over our family and to take care of us one more time. He abandoned a promising career in the army, which he had learned to love, so he could take care of us–keep us off the street, keep us safe. That was and still is my brother, always putting others before himself. And whenever someone asks me about my happiest Christmas, this is the moment that comes to mind.

*Many thanks to Ruth D. Thorne for her photo of la Calle Sol #12 Oeste.