Home » Centrovoices » Chronicles » Why Puerto Ricans Did Not Receive U.S. Citizenship So They Could Fight in WWI 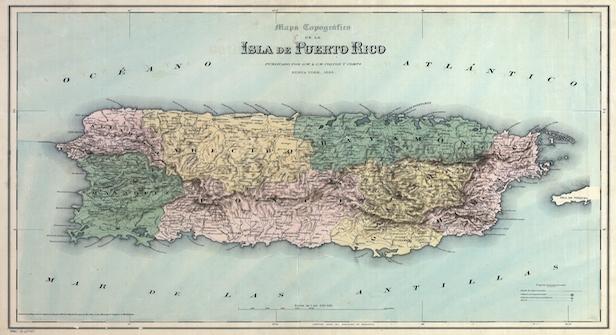 We just crossed that threshold, the centenary of the Jones-Shafroth Act, which among many other things, extended U.S. citizenship to the people of "Porto Rico" on March 2, 1917. A century later we still hear the tired opinion that it happened just so Puerto Ricans could be drafted into the U.S. military to be used as cannon fodder. Nothing is further from the truth.

Let us look at facts and chronology.

April 6, 1917–The U.S declares war on the German Empire and its allies.

May 18, 1917–Congress passed the Selective Service Act of 1917 calling for all males between the ages of 18 and 32 to fill out registration cards.

Case done. Nothing to see here, move on. That was the big American plan.

Step 2–Send them to France to win a victory for the Empire.

That seems to be the logic of people who can’t be convinced—regardless of how much evidence is presented to them, that the last thing the U.S. political establishment and the military wanted was Puerto Ricans in the military.

I have talked and written about this issue in academic forums and venues. But the truth is that no scholar who has taken the time to consider this matter believes that mobilizing the Puerto Ricans had anything to do with extending citizenship. Why? Because there is zero evidence supporting that opinion (because that is what it is— just an opinion) and there is a mountain of evidence proving the contrary.

[Here's a link to my academic work on this]

So, I’m not writing for scholars, and as such, I will drop all the academic jargon and instead have a friendly Q and A session.

Q: Why extending citizenship to Puerto Ricans in 1917, just before declaring war on Germany if not to get more soldiers?

A: One has nothing to do with the other. To think so, one must believe that U.S. politicians and military leaders thought the Puerto Ricans to be some kind of secret weapon or super soldiers when in fact the opposite was true.

Q: What do you mean?

A: Well, elected officials, politicians and military leaders considered that the vast majority of Puerto Ricans were too inferior (racially and culture wise) to ever become soldiers.

Q: But they did mobilize the Puerto Ricans.

A: True. But they did not want to. Puerto Ricans, just like African American did, fought for their right to fight, to prove they were men and thus deserving of full political rights and self-government.

Q: Are you saying people wanted to go to war?

A: Yes. This was WWI, not Vietnam. War was considered a legitimate form of diplomacy and a glorious act where men proved their worth. Combat was seen as an almost universal rite of passage. And this was a war fought to “End all wars” according to Allied propaganda. It doesn’t get more gallant than that.

Q: But Puerto Ricans were included in the draft…

A: Yes and no. Initially, Puerto Rico, Alaska and Hawaii—as territories—were excluded from the draft. But only because the Wilson administration was still considering what changes would be necessary to implement them in the territories. And by the way, almost immediately the newly elected Puerto Rican legislature asked Congress to extend the draft to the island, which was seconded by the press as an act of patriotism.

A: That is another misconception. The Chamber of Delegates opposed a citizenship bill in 1914 but only because it did not include universal male suffrage. And, Luis Muñoz Rivera opposed citizenship because he thought it would gain the US metropolis much sympathy thus weakening his party’s position.

Q: Were Puerto Ricans made US citizens to deter a German attack on Puerto Rico?

A: No. Puerto Rico was a U.S. possession due to the Treaty of Paris of 1899 and recognized as such under international law. So, a German attack on Puerto Rico would’ve been an Act of War even if Puerto Rico was only populated by two goats and a chicken.

Q: I have heard that it was all about economic interests, do you agree?

A: Sure but let’s put that into context. There is global competition for colonies and markets. What you can’t control directly you control economically and politically. The U.S. had been challenging British financial control of Latin America and the Caribbean since at least the 1880s—and by 1914 the U.S. is on its way to be the absolute hegemonic power in the hemisphere. But the Germans come into play. They want to penetrate those Latin American markets.

I find this argument a bit reductionist in the sense that WWI occurred precisely because fin de siecle imperialism, marked by  a scramble to secure colonies- for economic reasons, prestige and military advantages, inevitably puts five empires at war in the summer of 1914.

Q: What have other Scholars said about this?

A: Why, I’m glad you asked. Edgardo Meléndez argues that citizenship for the Puerto Ricans in 1917 was not only “about the narrow strategic interests generated by the war or the military recruitment of Puerto Ricans” but that “cementing Puerto Rican loyalty”, a sense of  a “matter of justice”, “rewarding the Puerto Ricans’ loyalty”, “doing the right thing” “supporting U.S. permanence in Puerto Rico” and making the island “a bridge the Latin race and the improvement of U.S. relations with Latin America” have much to do with it. (316-318, 323-24)1

I agree with him—in fact, I have been arguing the same for a while now. But, I would add that the military factor is not a tangential issue—but perhaps the most important of them all because of the geostrategic concerns the war created and President Wilson’s grandiose attempt to end the war with a diplomatic solution.

Q: Ok, now I’m interested. Why you think that?

A: Don’t get me wrong—there were many reasons for extending citizenship and a degree of self-government to the Puerto Ricans but they can all be tied to diplomacy, war preparedness, and what we call nowadays “National Security”.

1.      The fear of a growingly discontent population in Puerto Rico influenced the passing of the Jones Act. The U.S. War Department considered that stability in the island was essential to secure U.S. hegemony in the Circum-Caribbean. Because of Puerto Rico’s strategic position as a gate to the Panama Canal [key to U.S. naval dominance of the Western Atlantic and Eastern Pacific] military planners could not conceive of the island under a flag that was not the Stars and Stripes. This is pure geo-strategy.

Military planners feared that a discontent population may side with an invasion force so they supported citizenship for the Puerto Ricans, since at least 1909, believing it would be well-received and make the island population loyal to the U.S.

We need to remember one thing. The German Navy, since the early 1900s had changed its war games and planning. Now the enemy was the U.S (instead of the British Empire) and the Caribbean was the stage where the confrontation would take place. These plans and exercises were not a secret and the U.S. had a counter plan; defeating the German Navy in the waters near Vieques and Culebra. But just in case, U.S. military planners wanted to make sure that they could count on a friendly Puerto Rican population not to aid the invaders. The irony—the U.S. military wanted to prevent what happened to Spain in 1898 happening to them in case of a German invasion of the island.

2.      The Woodrow Wilson administration also believed that it would gain diplomatic clout from granting citizenship and some measures of self-government to the Puerto Ricans.

The Jones Act went along with President Woodrow Wilson’s New Diplomacy. Wilson tried to end the war without the U.S. having to be involved in it militarily. Part of his approach to diplomacy included the dismantling of old empires and giving voice and an opportunity to self-determination to the many “nationalities” living within these empires. Because of this, when Wilson addressed Congress on December 7, 1915—he urged them to pass the Jones Act because the whole world was watching and they needed to show they were serious about Wilson’s New Diplomacy, self-determination and freedom. Wilson tied the passing of the Jones Act to national security and defense preparedness.

Citizenship for the people of Puerto Rico (and the degree of participatory government that came with the Jones Act) would serve to prove that Puerto Rico was not a colony giving credence to Wilson’s diplomacy and the moral ground to call for the dismantling of the old empires.

See “Comments on the Jones Act and the Grant of U.S. Citizenship to Puerto Ricans” by Edgardo Meléndez for more antecedents to the 1917 bill. (317-18)

These projects, as well as the support for granting American citizenship to the Puerto Ricans shown by Taft, Wilson, the BIA (if reluctantly), Congress, and opinion-making groups in the mainland, responded to both local and international considerations like I just discussed above.

The outbreak of World War I accelerated the passing of the Jones Act but not because the U.S. needed more soldiers for a war in which they were not yet involved, especially when at the time “dark races”, including Puerto Ricans, were neither trusted nor wanted in the military—much less as combat troops.

Q: Hmm, I still believe that they just extended citizenship to the Puerto Ricans to have more soldiers.

Frank McIntire, Chief of the Bureau of Insular Affairs, (a branch of the war Department in charge of administering Puerto Rico) wrote a memorandum to Governor Yager regarding where to train the Puerto Rican recruits and insisting that training them in the U.S. would:

“...make them better men on returning to Porto Rico, physically and otherwise, this, even though they should not go abroad at all for service” (McIntire to Yager, November 24, 1917).

So, the military was not inclined, at all, to send the Puerto Ricans into combat, not even after President Wilson, heeding to pressure from Puerto Rican leaders, had ordered the War Department to create a Puerto Rican Division.

And there is one detail I left out in case I could not convince you.  This is what the Registration Act of 1917 established with regard to who should register:

In effect, all “American nationals” and citizens had to register—including Puerto Ricans, because under the provisions of the Foraker Act of 1900, Puerto Ricans had become “American Nationals.” The Puerto Ricans did not need to be citizens to be subjected to the draft law.

Finally, over 70% of Puerto Rican volunteers and men called up were rejected because they were simply not wanted as soldiers.

I hope this put this issue to rest so we can focus on the intricacies of colonialism.