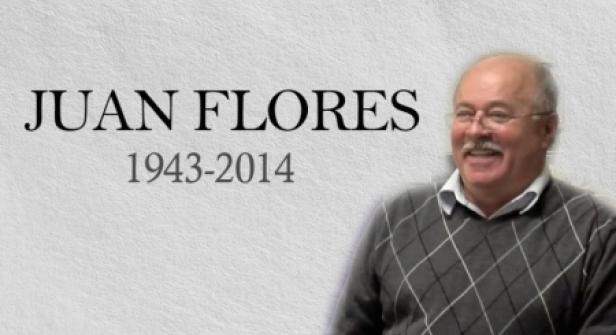 Eminent ethnic and cultural studies scholar, author and former Centro director Juan Flores has died at the age of 71. From his beginnings as an undergrad at Queens College to his brilliant career as a pioneer in the field of Puerto Rican Studies, Juan Flores is remembered with great admiration by his students, colleagues, friends and loved ones.

His longstanding commitment to the study of migration and to the formation of diasporas can be traced to his time as an assistant professor of German studies at Stanford, where he worked with Centro’s founding director, Frank Bonilla. He later returned to New York and, in 1975, became the Research Director of Cultural Studies at the newly-formed Center for Puerto Rican Studies.

From 1994-1997, he served as Centro’s director. During his tenure, he established an Advisory Board comprised of academic as well as community representatives, consolidated the research task forces into a Research Group, started the Tertulia Series, expanded the network of researchers at Centro, and provided research opportunities for a new generation of Puerto Rican scholars. He introduced one-year fellowships for researchers, which Centro continues to utilize today. It was also during his tenure as director that Centro’s Library and Archives received custody of the Historical Archives of the Puerto Rican Migration—now known records of the Offices of the Government of Puerto Rico in the United States. This is Centro Archives largest collection and an invaluable asset for the study of the Puerto Rican migration. José de Jesús, Centro’s Associate Director of Operations, remembers Flores as “a great professor and a dynamic speaker. We worked very closely during his tenure at Centro and I witnessed his resilience when living through some difficult times.”

As Centro Director, Flores played a vital role in transforming CENTRO Journal into an academic peer-reviewed publication. Today, CENTRO Journal is the preeminent journal on Puerto Rican Studies and among the leading academic publications in Latino Studies. He served on the journal’s board from its founding until his death.

He was a prolific writer, publishing numerous papers and books on race, identity, transnationalism, and music. Among his most influential work is The Afro-Latino Reader (2011), The Diaspora Strikes Back: Caribeño Tales of Learning and Turning (2009), Bugalú y otros guisos (2009), From Bomba to Hip-Hop: Puerto Rican Culture and Latino Identity (2000), Divided Borders: Essays on Puerto Rican Identity (1993), and Insularismo e ideología burguesa: nueva lectura de A.S. Pedreira (1979). His works, Insularismo e idelogía burguesa and Bugalú y otros guisos, were awarded Casa Las Américas prizes in 1980 and 2009. Centro Director Edwin Meléndez describes his translation of the Memoirs of Bernado Vega (1984) as “a classic text and mandatory reading for scholars in the field.” In addition to serving on the board of several journals, he served as coeditor of two book series, one with the University of Minnesota Press and the other with Temple University Press.

For Meléndez, “Juan went beyond the purely yet so important intellectual exercise to encourage a younger generation of scholars and community activists to engage in practices that question racial hierarchies while building more egalitarian relations among and within our communities.  For those of us who had the privilege of knowing Juan, his sudden, too soon passing away saddens our hearts. Our hearts go out to Miriam, his wife, and to all friends and family during these difficult times. Juan, we will miss you deeply.”

Dr. Flores had a long association with CUNY, including time as a faculty member at Hunter College, Queens College, City College (where he also spent a year as Director of the International Studies program,) and the CUNY Graduate Center. Beginning in 1999, he served as Director of Hunter's Mellon Minority Undergraduate Fellowship Program. He was a member of the Board of Directors of the New York Council on the Humanities and consulted for the Smithsonian Institute and the Rockefeller Foundation.