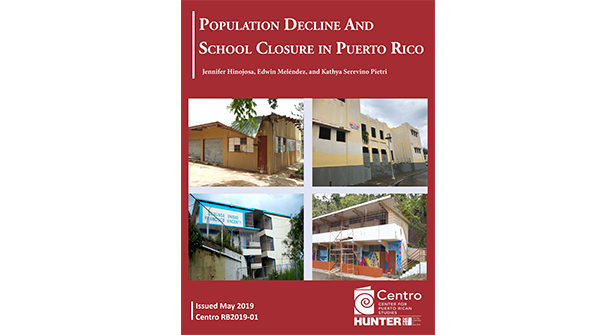 Youth is especially vulnerable in both cases. Children aged five and under, for instance, represent the largest demographic shift among various age groups in Puerto Rico, down to just 4%. As a result, public school student enrollment decreased 44% between 2006 and 2018. Private school enrollment decreased at a similar rate over this same time period. Hurricanes Irma and Maria only accelerated this trend, which the Center for Puerto Rican Studies has documented in previous research briefs on housing and student enrollment.

A contentious issue, school closures have become a emblematic reminder of looming austerity and lack of government support. Approximately one-quarter of public schools have closed in Puerto Rico, leaving 855 operational for the 2018-19 school year. When compared to urban areas, this has had a disproportionate impact on rural communities, where the majority of school closures have taken place (65% to 35%). As it stands, there are roughly 300,000 students enrolled in public school and a little more than 100,000 in private schools.

The Economic and Disaster Recovery Plan for Puerto Rico, which first became available as a draft in July of 2018, earmarks $7.5 billion for the improvement of the public education system. Looking at the big picture, education is but one of the many consequences of population loss on the Island.

According to U.S. Census Bureau estimates, the population of Puerto Rico is 3.1 million. For reference, the population hasn’t been so low since prior to the 1980 census. This figure also represents a net loss of -129,848 residents or 4% of the total population, from 2017 to 2018.

Some of the other consequences include, among others, vacant housing and a shift in dependency ratios. The latter is discussed in the report. For example, the ratio of elderly dependents to the working-age population has surpassed that of younger dependents, thus reflecting an aging society with low fertility rates.

These factors are worsened by the decade and a half recession that, in turn, has spurred an additionally devastating factor: outward migration. This requires solutions that maximize limited resources, while mitigating some of the more alarming long term consequences. As such, the report includes the following policy recommendations:

Firstly, more public Montessori schools should be established on the Island as a public-private partnership that encourages parental involvement and community development. Another feature of this self-paced educational method is mixed age classrooms, which eases the pressure to fill classrooms. This would be especially beneficial to rural families who would otherwise be at risk of losing access to schools within a reasonable distance. Montessori schools are already part of growing trend, with more than 50 scattered throughout the island. The Puerto Rican government has responded by creating the office of Secretary of Montessori Education. Now that there is funding, public Montessori schools are a viable option to reform the education system without relying solely on privatization.

If schools cannot be kept open, another alternative to handing over property to the private sector would be to repurpose the facilities into multi-purpose community centers (adult training, distance learning, etc.) that could serve the elderly population or assist in emergency situations. Closed schools could also provide support for the Island’s booming agricultural industry. In general, this option reflects the solidarity established at the centros de apoyo mutuo and other community centers that sprang up in the aftermath of Hurricane Maria. This kind of communal network has been a signature element of the recovery effort.

More broadly, as the report concludes, these policies align with the plan set forth by the Puerto Rican government, while also prioritizing the needs of rural areas and other disadvantaged communities.

See below a list of media coverage, in English and Spanish, of the report.

© Center for Puerto Rican Studies. Published in Centro Voices 07 May 2019.