Project Refuge and the Rebuilding of Barrio Playa 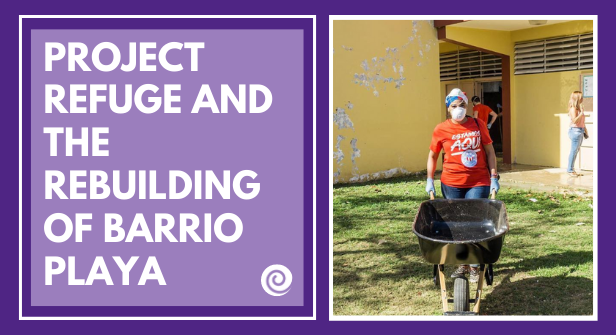 In a mission to aid Puerto Rico after the devastation caused by Hurricane Maria, New York City’s Mayor Bill de Blasio sent 150 employees to the Island - one, in particular, being Jonathan Soto, tasked with coordinating engagement between NYC’s City Hall and the San Juan municipality in emergency planning. With family in Aguada, a municipality on the western coast of the Island, it did not take long for Jonathan to realize the majority of relief aid sent to Puerto Rico was concentrated in urban areas with little to none devoted to towns like the one he knows so well. Rural towns were heavily impacted by the hurricane, including one Jonathan visited: Barrio Playa, located in the municipality of Añasco on the west coast.

Barrio Playa is a seaside town, economically disadvantaged and physically located in a tsunami danger zone. Subject to high risk of flooding, the town’s one entrance in-and-out makes it especially difficult for residents to attempt to escape when the alarms start ringing. After months of meeting with residents of the town, Jonathan and Stephanie Soto, whose families are from Morovis and Ponce, worked with community volunteers to document four of Barrio Playa’s biggest necessities in this time of crisis:

In response to these dilemmas, the duo formed Project Refuge - a community based organization whose name was inspired by a protest, No Refuge From The Storm, organized with houses of worship and activist groups demanding action for the deaths of Puerto Ricans outside of the United Nations. It did not take long for Jonathan and Stephanie to start tackling these necessities one by one; on the first anniversary of Hurricane Maria’s wreck through the island, Project Refuge held a 5k solidarity run for Barrio Playa in partnership with NY-based organizations like New York Disaster Interfaith Services, a key ally throughout the project in Barrio Playa. Fundraisers were held to supply the town with lawnmowers, tractors, shovels, and painting supplies. With potholes filled and debris removed throughout the neighborhood, the duo was ready to tackle reopening the local school.

The municipal government consistently pushed back on any and all attempts to open the school. A letter-writing campaign to the mayor commenced - stressing the urgency of the school’s art and physical facilities for the community. Press started building momentum not long after Project Refuge’s involvement, which included a Three Kings Day event for the community and a school grounds clean-up, adding to the pressure to reopen the school. Puerto Rican actress Lauren Vélez joined in on the efforts which managed to receive a public hearing. After a lack of action on the municipality’s part to open the school, Project Refuge started a local community newspaper, Somos Mas en Barrio Playa, criticizing the government for their delays in opening the school. This final push caused the municipality to finally sit with the community to figure out steps to reopen the school, which finally saw the light of day on March 7th, 2020. A gym, public kitchen, and computer lab are among the several facilities now available to the neighborhood as a result.

Two of Project Refuge’s goals are now complete, but the duo still has plenty left to accomplish. Barrio Playa still only has one entrance to the town. While the building of another road seems to be a big enough challenge on its own, Jonathan and Stephanie are fighting the push of outside agents onto the neighborhood. Football institution FIFA invested $1 million into Barrio Playa to build the largest soccer field in the Caribbean, sparking conversation of gentrification and privatization in the neighborhood. While this seems to be more than enough for the two to handle, Project Refuge’s track record shows their success so far has been because of the work of many. The nonprofit works on a mantra of true organizing being led by those who are directly impacted - Jonathan and Stephanie simply take a step back and provide guidance. All of the work done by Project Refuge has been accomplished by and with local community leaders and through individual donations and partnerships with allied organizations, showcasing that local community engagement is possible without grants.

Community advocacy and strategic organizing in Barrio Playa has largely been led by Jonathan, however, Stephanie has taken charge of another arm of Project Refuge: ensuring the spirit of community is celebrated. While countless organizations have taken part in the physical rebuilding of homes and groundwork for Puerto Rico, Project Refuge believes that self determination can also be promoted through arts, sports, information sharing, and the development of long term bonds that provide a collective sense of well being. This approach has proven to lead to a deeper sense of resilience in communities. The duo approaches challenges with this holistic point of view. This was the entire basis for their 5k run - it was a gap in the recovery efforts where citizens of the Island simply wanted to do the activities they were doing before the disasters. The run helped serve as a reset for a community struck deeply, physically and psychologically, by the storm’s trauma.

Stephanie involved herself in the organization of events and shared experiences, including the engagement with a local group called Ciudad Museo. A small team of University of Puerto Rico students, the group started their own nonprofit organization focused on beautifying neighborhoods through art. Murals have statistically been proven to reduce levels of crime in neighborhoods, and with that knowledge in mind, Ciudad Museo has moved forward with changing the dynamics of local communities as their goal. Project Refuge brought this arts-based group to New York City to meet with people and work on community projects on the ground.

With a plethora of negative conversations taking place surrounding several different points of the reconstructions efforts of the island, this organization has done what they could with the resources they have to turn that dialogue around. Project Refuge strives to show others the faces of Puerto Rico, whose resilience, passion, and stories are often left untold.