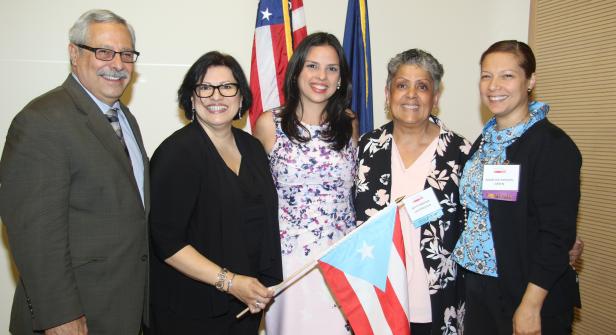 This past weekend, the 3rd Diaspora Summit took place in the Silberman School of Social Work in East Harlem. Hundreds attended the two-day event, which was billed under the banner of the Centro’s Rebuild Puerto Rico initiative, an online repository of available resources created in the days after Hurricane Maria.

Dr. Meléndez specifically addressed the post-Maria reconstruction effort in his opening remarks. In the process, he outlined  outlined the role of the diaspora in helping the Island recover from the devastation of Hurricane Maria—as always, within the context of a solidarity movement that seeks to unite the roughly 6 million Puerto Ricans spread across the 50 U.S. states.

To that end, Dr. Meléndez encouraged participants to help Centro build a hub to communicate and coordinate rebuilding efforts using the Rebuild Puerto Rico platform. This call to action coincided with the announcement of the expansion of the platform, which now includes:

Next, an opening plenary addressed the many ways in which Hurricane Maria has impacted stateside communities in places like New England, Upstate New York, Philadelphia, and Orlando. School enrollment, housing, and employment were among some of these ongoing challenges. Following several rounds of concurrent panels, a second plenary then looked at similar set of issues affecting the island—a conversation that will continue next month at a follow-up conference in Puerto Rico.

For Danny Just Barbosa, a UPR student helping to coordinate the event, his encounter with the diaspora took place during the Diaspora Summit. “It’s very gratifying to know that a part of the diaspora exists that is coming together to create a robust network—not just in New York, but also including different US states,” said the Caguas native.

Gretchen Sierra-Zorita, Public Policy and Communications Strategist for National Hispanic Foundation for the Arts, echoed this sentiment: “I’m a really big fan of the summit because it’s the best conference I know in terms of bringing Puerto Ricans from all over the United States to New York City to talk about sectoral issues”

Sierra-Zorita, who has attended all three diaspora summits, also noted the timeliness of the conferences with respect to the situation in Puerto Rico: “It’s interesting to see how it went from the political situation of the [Federal Control & Oversight] Board to the worsening of the fiscal crisis and the austerity measures and now to Hurricane Maria”

The second day of the summit included a series of Rebuild Puerto Rico ‘action trainings,’ including a morning workshop with BoricuActívated. Jennice Fuentes, founder and CEO of the civic engagement initiative, led the training session, which helps to empower Puerto Ricans on the mainland to engage with elected leaders and advocate on behalf of Puerto Rico. The session ended with a role playing exercise in which workshop participants interact with representatives of local public officials. “It really is that exchange, live, en vivo y a todo color, that makes the difference,” explained Fuentes.

Engagement was the theme of the concurrent panels that took place in the afternoon, which Margarita Varela Rosa, moderator of the Academic and Civic Exchanges panel and member of Cenadores PR, acknowledged as a key component of the diaspora summit: “It’s [about] finding so many people that find opportunities and ways to give back even after so much crisis and difficult times.”

A wrap-up plenary was then held in which Dr. Meléndez and Centro Research Associate Carlos Vargas-Ramos summarized some of the feedback that had emerged over the course of the two day summit. Among others, they include:

“This is just the first step,” Dr. Meléndez reminded the audience. Overall, message conveyed was simple: what affects Puerto Rico affects all Puerto Ricans and our community needs as much information as we can to confront the challenges that lay ahead for the diaspora and the island alike.

© Center for Puerto Rican Studies. Published in Centro Voices 17 May 2018.