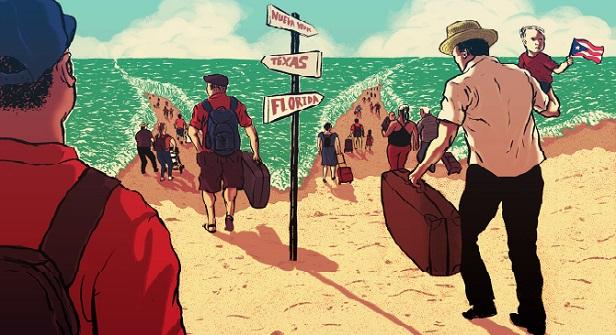 In light of the devastation caused by Hurricane Maria, the Center for Puerto Rican Studies has released a new report that estimates the total number of Puerto Ricans expected to arrive to the mainland by US state and age demographic. US Census data for the Puerto Rican population was updated as recently as September 2017. To read the estimates calculated by Centro, click here.

Last month, when Centro issued a data brief on the Puerto Rican population based on new information available from the US Census Bureau, it didn’t come as a surprise that the stateside population had grown in the past year, from 5.37 million to 5.45 million, a difference of 1.4%. And from 2015 to 2016, with the economic recession ongoing, the island population continued to decline at a rate of 2%, for a total of 3.25 million. Other established trends include more Puerto Ricans settling in more diverse geographical regions. States like Virginia and Texas, for instance, saw their Puerto Rican populations grow by 8% and 7%, respectively; while California (8.5%) and Georgia (8.1%) also saw significant growth. There was, however, one unexpected twist in the data. While the Puerto Rican population in Florida has surged in recent years—surpassing one million—the number of Puerto Ricans living in the state actually declined, which may be attributed to statistical error. This also meant that New York, for the time being, continues to have the largest Puerto Rican population.

After Hurricane Maria, however, these numbers will most likely look very in the coming years.  Thousands of Puerto Ricans have already been forced from the island, with more arriving each day. Florida officials estimate that around 30,000 Puerto Ricans have already made their way to the state; while other officials, including Mayor Bill de Blasio of New York have acknowledged the potential for new arrivals. It remains to be seen what the long term effects migration will be, but communities across the country have been preparing for an influx of new residents—which is why Centro has released another data brief with estimates of the potential number of Puerto Ricans that will relocate to the mainland, divided by age group and US state. The report includes one-year estimates, as well as three-year estimates. 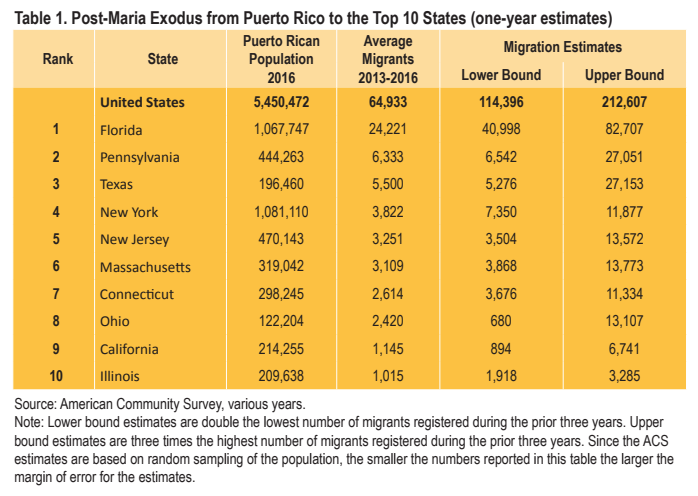 Between 114,000 to 213,000 people (a median of 163,000) are expected to leave Puerto Rico, according to Centro estimates. The largest concentration will end up in Florida (39%). And with New York most likely to receive significantly less people, the Sunshine State is now on pace to have the largest Puerto Rican population in the country. Pennsylvania and Texas round out the top 3 destinations, although unlike the previous census data, the more traditional hubs of the diaspora will receive an influx of new arrivals, including the Tri-State Area, New England, and the Midwest (Illinois and Ohio). The top 10 destinations, with conservative and liberal estimates, can be seen in the table above.

Those numbers are then further broken down into age demographics. Roughly 23,000 to 43,000 school-age children (5-17 years of age) are expected to arrive. They represent the second largest demographic after adults between the ages of 25 to 64. The table below also shows number of Puerto Ricans within the college-age (18-24) and senior (65+) demographics that are expected to leave the island. Over 13,000 children below the age of five are also part of the exodus. In each case, basic services relevant to these five demographics will be necessary to ease the transition. That includes ESL, employment, health care, and housing, among others. “What we are seeing is unprecedented,” says Dr. Edwin Melendez, Executive Director of the Center for Puerto Rican Studies. “With Maria, everything has changed and it is important for us to make sure that the needs of the Puerto Rican community are met,” he added. 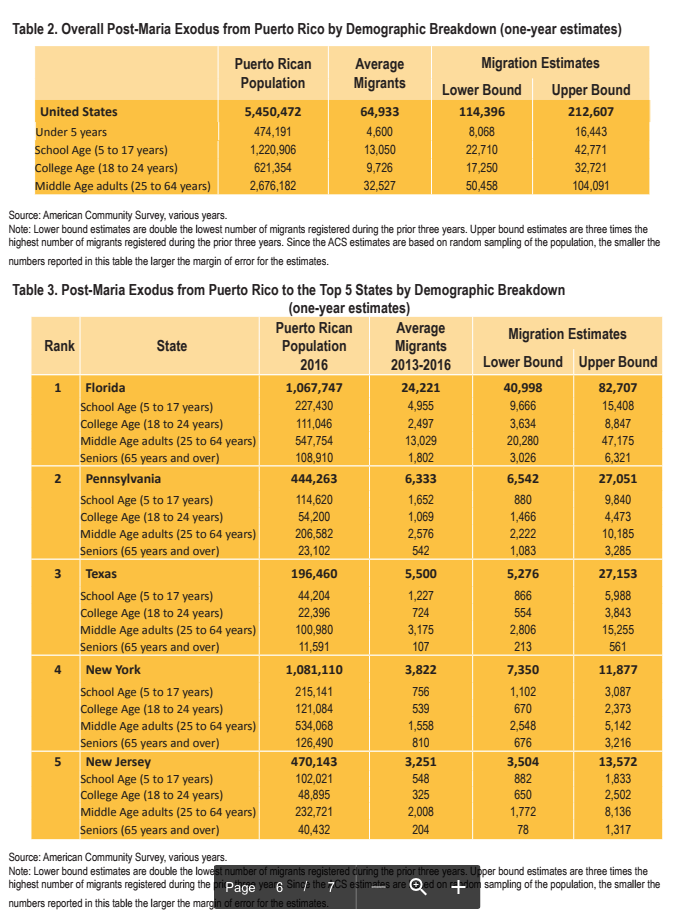