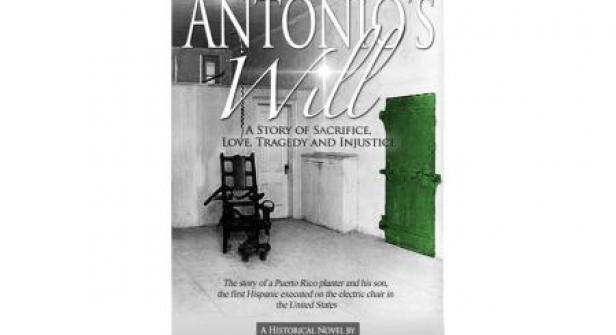 In 1914, Antonio Pontón, a Puerto Rican student at Albany Law School in New York, became the first Puerto Rican and Hispanic person executed on the electric chair in the United States.  He was wrongfully executed at the Sing Sing Prison in 1916, after an unfair trial, failed appeals, and thousands of petitions for clemency.

“Adiós” describes the moments Antonio Pontón embarked from San Juan to New York. The piece contains excerpts from Yasmin Tirado-Chiodini’s historical novel, Antonio’s Will, based on her years of research on Antonio Pontón, his family, the events surrounding the murder committed, his unfair trial, and his wrongful execution.

Too many late nights, his drinking, his tempestuous temperament, the countless women, and the babies who came along the way, prompted Manuel and Etervina to help redirect the course of their son’s future. Dangerous incidents, such as the one where Antonio drove a passenger-filled car in reverse for miles at high speed on a dare, were too much of a load to bear.

Antonio Pontón was out of control, like his horse when it fell down the cliff. Rumors were that he pushed the animal down to see how its natural instinct would save it, in a twisted scientific experiment.

“I told you it was accident!” Antonio denied the rumors when his parents confronted him. “I could have fallen down the cliff with it had I not jumped off the poor animal when it went crazy!” he insisted. “¡Les digo que se volvió loco el caballo ése! That horse went crazy, I tell you!”

He wanted nothing to do with his father’s tobacco business, but he performed well in his studies and wanted a profession. Perhaps sending Antonio abroad to study could break the cycle of his disorderly life and “help him mature,” the loving parents thought. Antonio’s will needed to be tamed. All the nonsense had to end.

Antonio agreed. He needed a change of scenery.

So, Manuel and Etervina resolved to send their son to New York to pursue a career in law at the prestigious Albany Law School, about two hours from New York City.

On July 8, 1911, days before it was time to start preparing Manuel’s land for the tobacco seedbeds, Antonio Pontón left his family and friends behind in Comerío, and prepared to embark on his five-day steamboat journey to New York. José Juan, one of Manuel’s workers, drove Antonio, Manuel and Etervina to the Port of San Juan. There, the driver unloaded Antonio’s trunk, and carried it to be stowed on the ship.

“Bendición mamá,” Antonio said to Etervina, following tradition and asking for her blessing, as he prepared to board the SS Caracas. “I promise to write often.”

Etervina placed both hands on her son’s cheeks and caressed his face with her thumbs, looking into his big green eyes. She wept, already hoping for his safe return.

He was the first one in the family to leave the nest. The first one to go to a university.

“Así lo haré, Madre. No se preocupe. ¡Tranquila!” said Antonio in Castilian Spanish, still spoken in the island back then, trying to reassure his mother he would do as she asked, not to worry, to calm down.

Etervina opened her purse and pulled out a small black wooden box, which she gave to her son.

When he opened the box, Antonio saw that it contained a gold pocket watch of about two inches in diameter, resting on soft black felt. He removed the watch from its case to admire its detail. It had a beautiful ivory fascia, and its chain was made of an intricate heavy gold. On the reverse of the watch, engraved cursive letters read Antonio Pontón Santiago.

Speechless, jewel in hand, Antonio embraced his mother. “¡Gracias, mi angel! Thank you, my angel!” he said to Etervina. “It is beautiful! I will always carry it with me, to remind me of you!”

“Farewell my son,” said Manuel to Antonio with teary eyes, shaken by his son’s departure. “You know what to do!” Manuel issued a direct command to Antonio to behave, looking straight into his eyes.

“Will he settle down and get a hold of his life, once and for all?” Manuel’s mind asked. “One could only hope and pray.”

Walking towards the Caracas, Antonio turned his head slightly to capture a mental image of his parents one last time. In the far distance, he saw a young woman with two little ones about four and two years old standing by her side. The children waved at him.

She made a gesture with her hands, as though saying, “I am sorry. I gave in!”

Indeed, she had succumbed under the spell of the children’s repeated requests to take them to the Port of San Juan to say a final farewell to their father. Antonio stared at the children for a minute with both a frown and a smile, and then he signaled at them to come over to him.

The children ran towards their father and launched at him, hugging him, giggling. He returned their embrace and kissed them, picking up the smaller one in his arms.

“Acordaos de lo que os dije ayer, ¡Portaos bien!” he reminded them to behave while he was gone, repeating what he had told them the day prior when he visited them to say goodbye. After promising to mail postcards, the father sent the children back to their mother.

Antonio thought the kids would be better off without him, for the time being. He was just not ready to be a father. He himself needed to sort things out. It was time. And the children had the support of the Pontón family, even if their mother and father were not meant to have a future together.

Obedient, little Antonio and Manolo followed their father’s instructions. He watched them skip away, but on the return path to their mother, they sidetracked.

“¡Abuela! ¡Abuelo! Grandmother! Grandfather!” screamed little Antonio and Manolo at their grandparents, as they ran with their arms open, ready to hug Manuel and Etervina. They held them in a loving embrace, kissed them and sent them on their way back to their mother.

As the children left, Antonio shifted his gaze towards his father Manuel and gently waved at his family, while they returned the gesture.

With half a smile and a tight lip, Antonio’s green eyes spoke, “Adiós” (“Goodbye.”)

Then, he turned and walked towards the green metal door of the steam cargo vessel that swallowed him away.

This was the last time they saw Antonio alive.

© Yasmin Tirado-Chiodini. Reprinted in Centro Voices by permission on 22 October 2014.