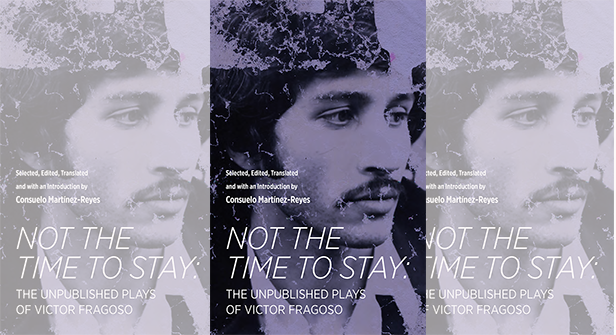 Not the Time to Stay: The Unpublished Works of Víctor Fragoso, a new anthology published by the Centro Press, unearths the previously unpublished plays of Puerto Rican poet and playwright Victor Fragoso. “We see Fragoso as one of the greatest, most undiscovered writers,” remarked Centro Director Dr. Edwin Melendez at a presentation of the book held at the Centro Library & Archives.

It was while searching through the Centro Archives as a postdoctoral fellow at the Center for Puerto Rican Studies that the anthology’s editor Dr. Consuelo Martínez Reyes first came across the name Víctor Fragoso. At the time, she had been looking for an original research topic. After tracking down a copy of Fragoso’s curriculum vitae, she decided to contact his family in Puerto Rico. As it turns out, the family had boxes of Fragoso’s papers in storage. “I remember my hands were black from the dust of touching all these things,” Dr. Martínez Reyes said..

The trip to Puerto Rico had come at the behest of Dr. Meléndez. He had urged Dr. Martinez Reyes to convince the family to donate Fragoso’s papers to the Centro Archives after she approached him about the discovery. “We have to acquire this, we have to publish this—he’s so clever,” she recalled telling Dr. Meléndez..

Luckily, she did. The ‘Víctor Fernández Fragoso Papers, 1968-1981,’ are currently housed at the Centro Library & Archives and are available in digital format on the Centro website. Fragoso is also featured in an exhibition on display at the Centro Library & Archives that highlights pioneers of the Puerto Rican community in New York, such as poet Tato Laviera, politician Herman Badillo, and theatre legend Miriam Colón.

Not the Time to Stay: The Unpublished Works of Víctor Fragoso is just the latest in a series of efforts to bring attention to Fragoso’s creative work. The title is taken from one of the plays included in the anthology. “I chose that one because it has everything that Fragoso was trying to do with his theater, it’s very representative of his work,” Dr. Martinez Reyes told those in attendance at the book presentation. That includes using elements from the Theatre of the Absurd, Minimalism, and the exploration of important social issues—in addition to a mix of English and Spanish, references to Puerto Rican history and culture, and openly gay themes that reflected his queer identity.

In total, the anthology includes eight plays, seven of which were written in Spanish and subsequently translated and edited by Martinez Reyes. Many of the themes and style of these plays are described in an essay written by Dr. Martinez Reyes for Centro Voices that was adapted from an article published in an issue of the CENTRO Journal.

Sadly, Fragoso left us in 1982 at the age of thirty-seven, after contracting HIV. According to Dr. Martinez Reyes, Fragoso was among the first AIDS patients to die in New York City, though his death was initially attributed to advance stage cancer.  “He was so loved that after he died, his students performed one of his plays to honor him,” she added.

Going forward, Dr. Martinez Reyes stated that there is still a lot of work to be done with regard to the study and staging of Fragoso’s writing. His poetry, which Dr. Martinez Reyes described as inflected with scientific metaphors—Fragoso had trained as a scientist before obtaining his PhD in Spanish Literature—is likely to be the subject of forthcoming anthology.