Home » Centrovoices » Letras » I Am Here: On Becoming an Artist and Being Puerto Rican: An Interview with Michele Carlo

I Am Here: On Becoming an Artist and Being Puerto Rican: An Interview with Michele Carlo 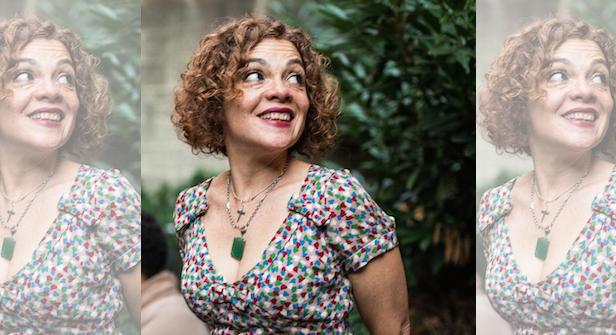 Editor's note: This interview is the ninth in a series that will focus on contemporary Puerto Rican authors. To read the previous interview with Malcolm Friend, click here.

Author's bio: Michele Carlo is the author of the NYC-set memoir Fish Out of Agua: My Life on Neither Side of the (Subway) Tracks (Citadel 2010) and is a storyteller/performer who has appeared across the U.S., including the MOTH’s GrandSlams and Mainstage shows in NYC, on NPR, and the PBS TV series “Stories from the Stage”. She also hosts a podcast called “Fish Out of Agua,” showcasing a different guest artist each week on the internet radio station Radio Free Brooklyn. For more info on Michele visit: www.michelecarlo.com or follow her on Twitter @Michele_asShell

Ivelisse Rodriguez: Piri Thomas, in Down These Mean Streets, writes about a type of racial passing; he is assumed to be African-American. But as opposed to traditional narratives of passing, such as those written by Nella Larsen and James Weldon Johnson, passing in your case and in Thomas’ case is not a conscious choice either of you made. Someone else is making the decision for you because you don’t fit into the US system of racial classification. What does it mean for Puerto Ricans to “pass” in a racial sense? What does that like?

Michele Carlo: I can only speak to my own experience. To me, passing meant denial: of my roots, my heritage, and my family. When I was growing up, it was usual and accepted for people to ask what you were, as in what your ethnicity was—mostly, but not always, out of simple curiosity. I never knew how people would react when I said I was Puerto Rican. Sometimes the response was, "No, you're not," to which I'd say, "Yes, I am." "I don’t believe it," to which I'd answer, "That's okay, most of the time, my family doesn't either." Making a joke was how I diffused many an awkward situation; only sometimes my alacrity backfired.

In one of the stories from Fish Out of Agua, I reveal at a family gathering that I'd been jumped at a “Kill Black & Puerto Rican Day” at my high school. Why did I volunteer that? I think perhaps I was secretly (and unconsciously) proud of it. One relative reprimanded me, saying it was my fault and if “I looked like you, I would pass for the rest of my life.” Only I never completely passed. Years later, in the late 1990s, I attended a seminar called “Latinos in Acting.” During the Q&A, I asked for advice: at many Latino castings, I was told I was too white; yet at Caucasian castings I was often "too exotic" (today's code speak for not white enough). One of the panelists actually advised me to stay away from Latino castings so the real Latinos would have a chance and that I was taking away from them by trying to get that work. I’d be curious to know how those instances would "pass" under today’s lens. Was I subconsciously subverting my white-presenting privilege, yet only because I had that privilege could I insist upon claiming myself? It’s a conundrum. All I know is to me, passing—in all its forms and meanings—is one of the most repugnant words/ideas society insists on clinging to. And I hope this generation is the one that finally ends it.

IR: What was the significance to you of being a tagger, "Shell 194," at the onset of graffiti culture? You participated in this very historical moment during the ‘70s. Was this a way to engage with your Puerto Ricanness? Or did it connect with your desire to become an artist?

MC: Honestly, I started tagging because that’s what my best friend at the time (and the kids I was hanging out with) did. For me, it was less about being Puerto Rican than to have a place to fit in—although I certainly couldn't have articulated it that way at the time. With the distance provided by adulthood, I think being thwarted from my dream of attending the High School for Art & Design may have had something to do with it. Graf was definitely a way for me to claim myself, a way to say, "I am here!" 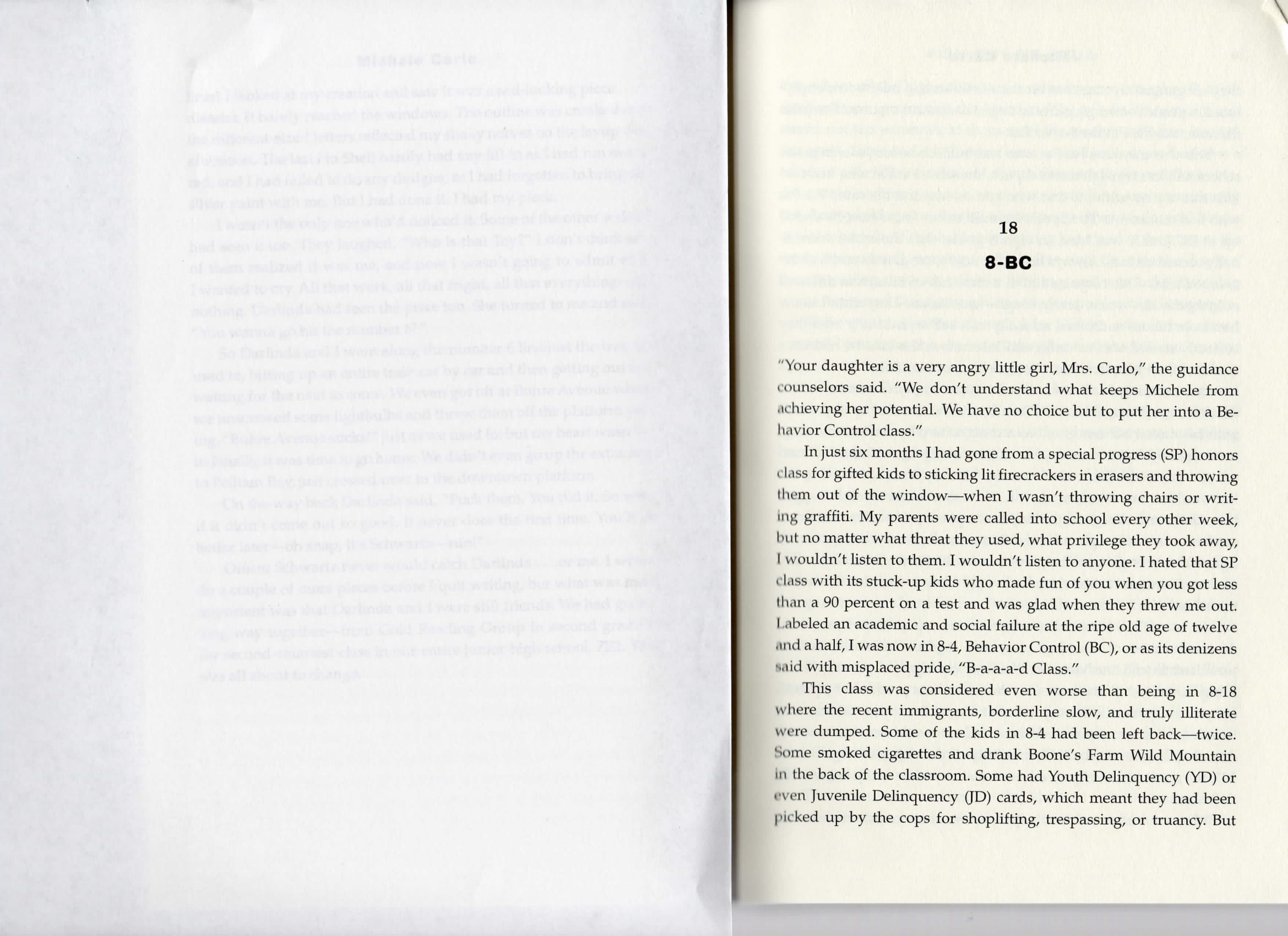 Interestingly, graffiti is often thought of as a 70s thing, yet it's existed in some shape or form worldwide throughout time. But because that incarnation of the art form at that exact time sparked so many other cultural movements (rap, hip-hop, B-Boy/Girl, vougeing, et. al.) it continues to be revered today. I stopped tagging once I hit my mid-teens, and being an artist became the thing I identified with most, an identity that superseded all other identifiers. To this day, I still proudly proclaim to be part of “the artist’s tribe.”

IR: There is a pattern of silences in your life; for example, molestation, post-partum depression, and mental illness are some of the things not named throughout your life. In a scene in your memoir Fish Out of Agua, students in your school are participating in “Kill Whitey Day,” where whites are beat up. You get mistaken for being white, and a group of girls beats you up until another student steps in and says you are Puerto Rican. One of the girls who assaulted you, then asked you several times why you didn’t say anything. Do you think all the silences in your life contributed to your lack of verbalization of your identity in that moment?

MC: That is an insight I never considered before, and I thank you for positing it. I was usually quite verbal about my ethnicity, so now that you bring that up, yes, it was uncharacteristic of me to remain silent. Perhaps, I was just resigned to it being the way life (and high school) was. But then again, there was also a story making the rounds at that time about an olive-skinned white girl from another high school who tried to pass (there's that word again) herself off as Puerto Rican, was caught in her lie—and subsequently endured not just a “normal” beating but a horrible sexual violation. After hearing that, I was determined nothing like that was ever going to happen to me. So, for me, staying silent during any jumping was the more survivable choice.

IR: You write letters to yourself from others where they say the things you wish they had said in life. If you could write a letter to your teenage self, what would be the pivotal thing you would say to her?

MC: Wow! Great question! I would tell my teenage self, “You are not lesser than anyone. There is no one like you in this entire world and someday you will realize and be glad for it. You also have everything you need to thrive in life inside you—don't be afraid to use it—and don't be afraid to ask. If you don't ask, the answer is always no.” So basically, I would just say: “don't be afraid,” something I still tell my middle-aged self every day, haha.

IR: You are a multi-faceted artist: a visual artist, performer, and writer. What are your current projects, and what do you hope to add to the oeuvre of Puerto Rican arts?

MC: I continue to perform stories from my past and present lives, am slowly working on a second book, and have recently begun creating short films in collaboration with my current partner. Also, for the last year and a half, I’ve been with the internet radio station Radio Free Brooklyn doing a weekly hour-long show/podcast named after Fish Out of Agua, called “Fish Out of Agua with Michele Carlo.” Initially, I serialized my book, reading a couple of chapters each week along with playing a few songs from the time period of the stories, and I included a short segment with one of the many performing, literary, visual and music artists I’ve come to know over the years.

I'd originally intended to do only one season. But when the serialization was complete, I decided to continue the show and do for others what I would wish for myself. Each week I feature a different guest artist, interviewing them about their trajectory to who they are today and the work they do—including three of their favorite songs. In the past year, I’ve showcased over fifty artists: women, POC, LGBTQ and differing ability—and if I seem to show a slight preference to Latinas, you’ll have to forgive me (haha). Why showcase these “stories behind their stories?” Because I have known all too well what it was like to be "the other" in the room. And since our stories have been the ones dismissed, discounted and devalued, I want the world to know who these artists are and why they matter. And perhaps in my own small way, inch toward changing the default of what being an artist is.

© Ivelisse Rodriguez. Published by permission in Centro Voices 07 May 2018.