Love is Violent: An Interview with Anjanette Delgado 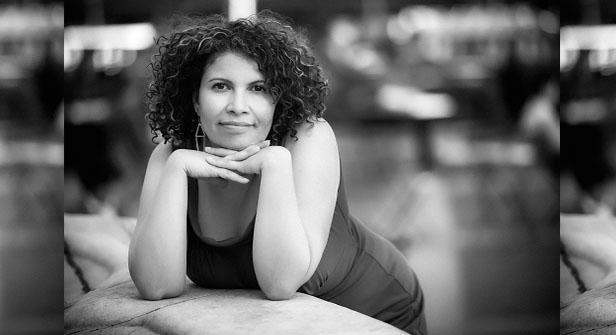 Editor's note: This interview is the 13th in a series that will focus on contemporary Puerto Rican authors. To read the previous interview with Rosalie Morales Kearns, click here.

Anjanette Delgado is a Puerto Rican writer and journalist. She is the author of The Heartbreak Pill (Simon and Schuster, 2008), 2009 winner of the Latino International Book Award, and of The Clairvoyant of Calle Ocho (Kensington Publishing & Penguin Random House, 2014). Her work has appeared in numerous anthologies, as well as in The Kenyon Review, Pleiades, Vogue, The Hong Kong Review, NPR, and HBO, among others. A Bread Loaf Conference alumni, she won an Emmy Award for her writing in 1994, served as a judge for the Flannery O'Connor Short Fiction Award in 2015, and was a Peter Taylor Fellow in Fiction in 2016. She holds an MFA in Creative Writing from Florida International University and lives in Miami, Florida.

Ivelisse Rodriguez (IR): People see psychics to find out about their love lives, but in your second novel The Clairvoyant of Calle Ocho (2014), Mariela, a recovering clairvoyant, believes that “understanding men has nothing to do with predicting the future and everything to do with being able to see clearly what is already right in front of you.” In your first novel, The Heartbreak Pill (2008), Erika Luna decides to create a pill to deal with heartbreak. Love is then taken out of a mysterious, nebulous zone and is brought down to a rational and scientific level. Can you discuss the role of love in your work?

Anjanette Delgado (AD): To explain the role of love in my work, I have to explain two facts about myself. One, that I am Puerto Rican and that I believe the colonization of Puerto Rico has resulted in a male species that feels perpetually wronged, emasculated. Society wrongly thinks we are “mantenidos” (kept) or that we handed over our country (as opposed to negotiated a temporary solution to a war we wouldn’t have won). The result of that nation-less identity when it comes to love is that you have a society where the half of the romantic relationship that identifies with male energy (el macho) is in a war to demonstrate its power and status as “men,” with men here meaning “in charge of women.” Take a look at the local news coming out of my island. It’s as if men in general—obviously, I do not mean every single man—are at war with the weaker among us, and so the most horrible crimes are perpetrated against women, children, the elderly, animals, and members of the LGBTQI community. Anything perceived to be weak, we want to destroy.

The second fact about myself that might shed some light on the role love plays in my fiction is that, as a teen, I couldn’t see clearly how to make a living from writing and became a journalist as a compromise with myself. For years, the reality of my job as a television news producer forced me to face the worst of my compatriots in a way that was traumatizing and disproportionate to reality—the majority of Puerto Ricans are kind, generous, smart, clever as hell, resourceful, and creative people. But when El Vocero was at its worst in the early 90s, my job was to read it cover to cover each morning, along with the others, and to view footage from horrible crimes and to hear about these crimes, both in Puerto Rico, and later in Miami. My work as a journalist, thus, deeply influenced my work as a writer.

And so, when I write about love, I am really writing about heartbreak. Love in my fiction is an ideal, something you teach yourself to achieve. You become a better person in order to “handle” love, to recognize it, to feed it, to cherish it. On the road to that, there is a hell of a lot of loss and heartbreak of all kinds, not just romantic, but also familial and societal.

And when you are grappling with love that might hurt, that could kill, you get scientific and precise and rational and careful and you try to figure it out because it really matters. What you see in my work is women trying to figure out the love thing with intelligence and thought and process and method because they know what it is capable of.

IR: Your short fiction (“Lucky” forthcoming in Pleiades and “Once in a Blue Room” published in the Kenyon Review”) is fierce—violent. “Lucky” tells the story of kidnapped girls and “Once in a Blue Room” is about a woman who is done with her abusive husband. In thinking about your novels, which focused on love, how do you shift from love to violence?

AD: There is no shift. Love is violent. It breaks your heart. Sometimes it breaks your body. In “Once in a Blue Room,” it’s the love the woman once felt that keeps her a victim. When she frees herself from it, she lives to love again. Maybe make a better choice in the future. In “Lucky,” what keeps the girl/women captive is their love for each other. In each case, when did fear turn into love or love into fear? And where is the catalyst? In both cases, it is violence. 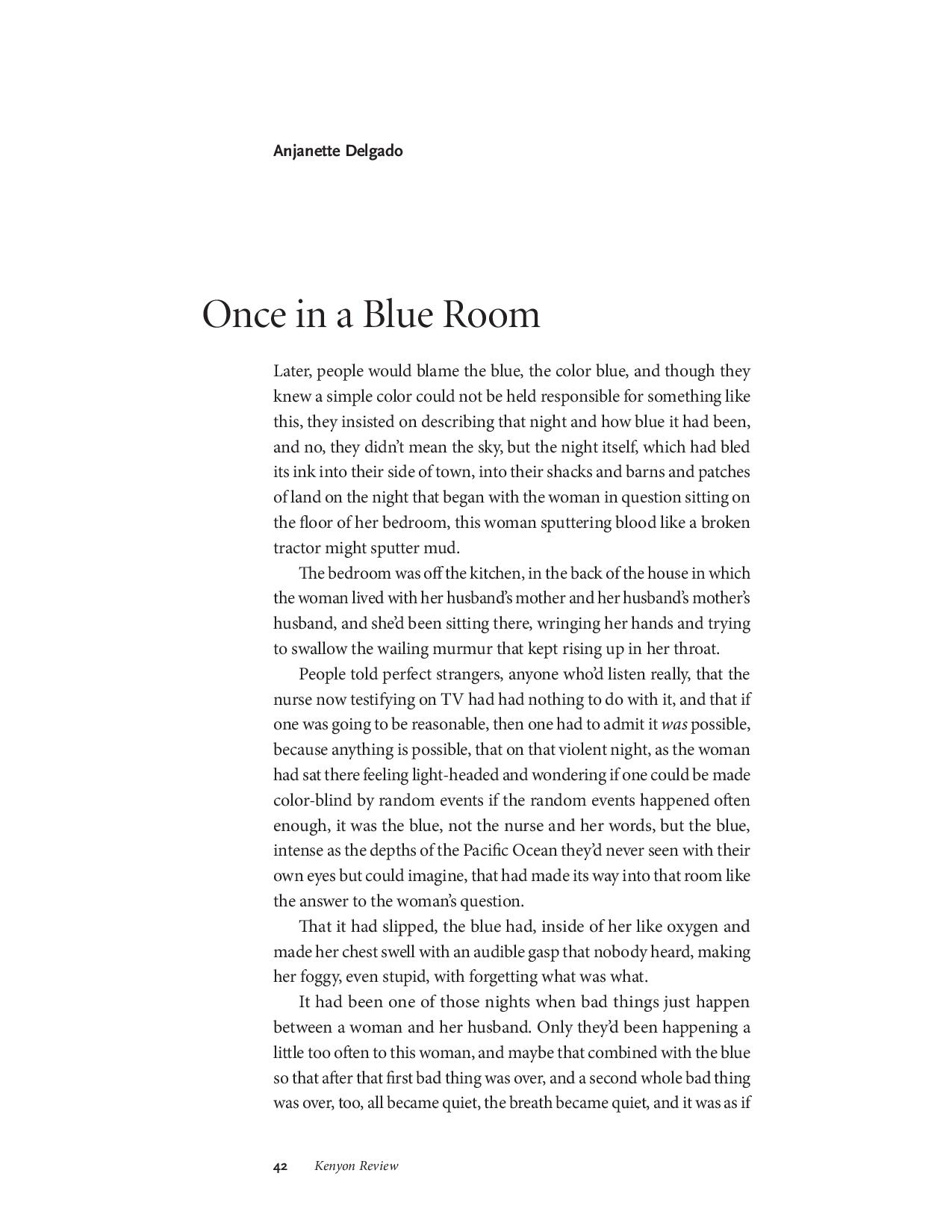 IR: Your novels slant more towards chick lit and your recent short fiction is literary fiction. In writing in both genres, what do you think each offers?

AD: My novels were my first work. Most people are smart enough to begin with short stories and find their way, their voice. I knew no such thing, only that I loved to create and populate detailed worlds. I had not read enough, written enough, and so they lack the layering of literary fiction. What I think they contribute is an earnest voice. Chick Lit as we understand it today was born in the 70s as an outlet for women facing incredible changes, new freedoms and the problems that came with those freedoms. They needed a friend, and these books were those friends letting them know they were not the only ones feeling guilty about working outside of the home or considering a divorce. I believe my novels are part of that post-feminist tradition.

My literary fiction is just the natural evolution of reading and studying and editing and becoming as enamored of the practice, of the craft, as I am of the things I want to say and contribute before I die. It is my goal to keep my voice honest and real, with all the humor and the ferocity that was there in the early work, while adding the craft, the layering, and thus the pleasure of literature to anyone kind enough to devote time to reading my work.

IR: I’m so fascinated by your bio. Each time I read it, I think, here is a woman with some chutzpah. You’ve written screenplays, novels, and for the media. Can you talk about the courage it takes to write and to write in different mediums?

AD: Thank you, Ivelisse. I do not feel courageous at all. I have to write. I write all the time. Every day. When I don’t write, I am the kind of person you wouldn’t like very much. I become dark, scared, petty, even angry, as if I were powerless. When I am writing, I am enough, and I am strong and can handle the bad things and turn them around. So, needing to write meant that, through the years, I said yes to everything. Want to do a review? Yes. A column? Yes. Fashion writing? Yes. Dare to write a screenplay? Sure. What about poetry? Let me try. Then again, it’s writing. In every form, in any form, you are doing the best you can and putting yourself out there to be judged, and that’s okay. It comes with the benefit of being heard.

IR: Your work centers around the lives of Latinas, so what do you ultimately hope to convey to them through your work?

AD: I write about all women, and when I write about Latinas, I do it for those who do not know them. Sure, I hope Latinas, especially Caribbean women, so often misjudged, their heat and passion confused with looseness, will feel correctly represented in my work. But I write for the female energy. I hope to show that love does not have to be an adversary. We can teach ourselves and others what our place in the world must be and will be. We can own our essence, the gift that we all are. But first, we must stop being our own worst enemies by rearing sexist sons, decrying other women their life choices, by siding with men who hurt other women, and by looking the other way out of fear. These behaviors keep us in our own little jails, and I believe writing is a powerful way to help us reexamine ourselves and how we contribute to the very things we say we want to eradicate.

Editor's note: This interview is the 14th in a series that will focus on contemporary...
7 New & Forthcoming YA and Children's Lit Books for Young Puerto Rican Readers