Home » Centrovoices » Letras » Mujeres at the Mic: The Nuyorican Experience

Mujeres at the Mic: The Nuyorican Experience 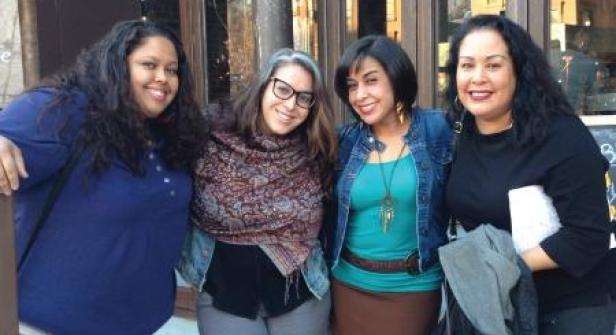 William Carlos Williams referenced his medical background to describe the poet’s task of working “in the particular to discover the universal.” There’s a similar quote by James Joyce, though Nancy Mercado, famed Nuyorican poet and educator, only mentions the first. Perhaps this is the more appropriate of the two–Williams was half-Puerto Rican after all.

Nancy is echoing the sentiment of the three other women at the table: Peggy-Robles-Alvarado, Vanessa “Chica Ferreira, and Maria Rodriguez-Morales. Last month, they hosted a conference panel entitled Mujeres at the Mic! A Reading By Nuyorican Women Poets. It was an opportunity to showcase their individual backgrounds within the same school of poetry. The particular to the universal.

We decide to meet at the same restaurant in Harlem where the group first got together in person to discuss the panel. That meeting was in December of 2015. The Association of Writers and Writing Programs Conference, or AWP, was held in Los Angeles from March 30th to April 2nd. It’s one of the biggest events the industry can offer writers in terms of professional development. Four days of engaging with fellow writers, editors, publishers, agents, and so on. No one in the group had ever been. Attending was one thing, hosting a panel was another.

This interview also functions as a debriefing. One week removed from the conference and the experience is still a blur, bags remain unpacked, and there is a lot to process. However, the conversation does not begin in earnest until Peggy arrives last. She’s the de facto leader of the group, through her daring sense of initiative alone. It was she who submitted the proposal for the conference. That was the extent of her plan. When I ask about the backup plan, she replies there was none. Her confidence bordered on reckless, especially as others expressed their doubts.

AWP is often criticized as a whitewashed event. As a matter of fact, this year there was an unofficial event hosted featuring some of the proposals rejected by the conference. Not surprisingly, many of them were centered on the writing experiences of those typically marginalized by the literary establishment. So it wouldn’t have come as a surprise for Peggy’s proposal, a performance no less, to be rejected, nor was it surprising for others to share a sense of skepticism.

Proposals are due almost one year before the conference with acceptance notices coming at the end of July. When Peggy received the news, she kept it to herself for a few days–along with the sense of validation that came with it. Then she got to work. The group met through Google Hangout and occasionally in person in groups of twos or threes. This included editing, rehearsing, and planning every other detail that went along with attending the conference.

This lasted months until December came along. But there were other concerns besides the panel. A trip to Los Angeles would be expensive, not to mention the hotel room. So when Mujeres at the Mic! was launched through social media in February, it became a fundraiser and collective journey as well. The group posted photos of their donors, shared bits of poetry, and held a reading in Brooklyn. People just wanted to give them money, even if it meant buying a book they already owned. The support also came from a community of organizations that included Capicu, El Kat Productions, and Full Circle Ensemble.

In the months leading up to the AWP conference, Mujeres at the Mic! was becoming a movement–one supported by the diverse communities these women represent in New York City. They even designed a T-shirt. Taíno Ink, a Bronx-based organization, printed the shirts, which eventually sold out.

Finally, the end of March came. They went to AWP, sharing videos and photos of the journey. Mujeres at the Mic! was scheduled to take place on the last day of the conference. The panel was assigned to an obnoxiously large room. And at first...it was empty.

Then slowly, a crowd filtered into the room. Panels run concurrently during the conference and often overlap, so people were arriving late, but they did arrive. The women had prepared a collaborative piece centered around a particularly relevant subject. Before starting, however, a young man shouted muévelo in a sexually suggestive tone...the perfect segway into a poem about street harassment. Voices intertwined with Nancy discussing intellectual harassment in her piece. Peggy, Vanessa, and Maria then performed a piece that split each poet’s role into that of the harasser (Peggy yelling in Spanglish), the woman trying to stay calm (Vanessa), and the empowered woman (Maria).

And the man in the audience that shouted “shake it?” He walked out–the highlight of the performance. The message did reach three young Chicanos. They thanked Mujeres at the Mic! for the lesson in machismo. Overall, the response was emotional, with an emphasis on the cultural roots and uncompromising nature of the performance. Four Nuyorican women poets reading at AWP was a first.

What is a Nuyorican? Are any of them women? Those are the first words of the panel description listed on the AWP website. When the Nuyorican movement first began, the answer to the second question was Sandra María Esteves. Then Nancy Mercado emerged on the scene. And in the last decade, Maria, Peggy, and now Vanessa, have joined these two pioneering figures as Nuyorican women poets.

Yet even within the label of Nuyorican, each woman represents a unique background. Peggy is a second generation Dominican-Puerto Rican from the Bronx. Maria is Puerto Rican hip-hop head who grew up in East New York. Nancy is a Puerto Rican raised in New Jersey who has lived in Manhattan for years. And Vanessa is Dominican, raised in Manhattan, living in the Bronx, strongly identifying with the Nuyorican aesthetic after growing up surrounded by Puerto Ricans.

Together, they went to AWP without compromising who they were, which despite not having a backup plan, now seems like the way to go. Back in New York, there will of course be more readings, stages to share. It’s a community, intergenerational and continually evolving. One that Peggy finds encouraging enough to assert, “My words will always find a home.”